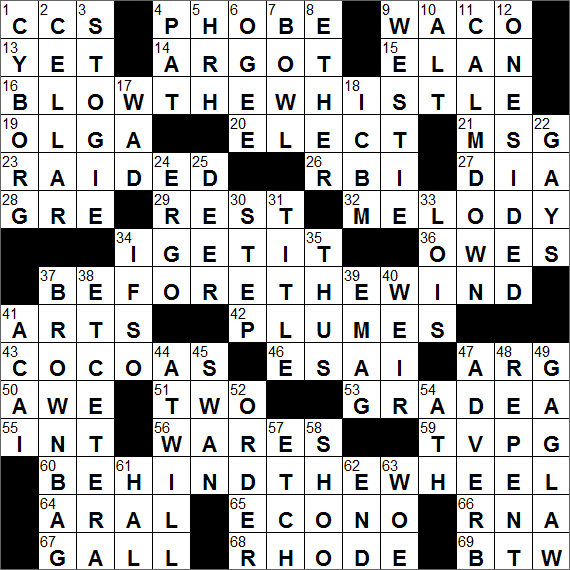 Each of today’s themed clues comprises three words, beginning with the letters B, T and W:

Fluids in an IV (intravenous drip) might be measured in ccs (cubic centimeters).

Argot is a French term, the name given in the 17th century to “the jargon of the Paris underworld”. Nowadays argot is the set of idioms used by any particular group, the “lingo” of that group.

Argentina is the second largest country in South America (after Brazil), and geographically is the world’s largest Spanish-speaking nation. The name “Argentina” of course comes from the Latin “argentum”, the word for “silver”. It is thought that the name was given by the early Spanish and Portuguese conquerors who also named the Rio de la Plata (the “Silver River”). Those early explorers got hold of lots of silver objects that they found among the native population.

Brazil is the largest country in South America, and the fifth largest country in the world (after Russia, Canada, China and the US). Brazil was a Portuguese colony from 1500 to 1815. The official name of the country under Portuguese rule was Terra da Santa Cruz (Land of the Holy Cross). However, European sailors used the name Terra do Brasil (Land of Brazil), a reference to the brazilwood tree that was much prized in Europe for the deep red dye that it produced.

51…What it takes to tango..TWO

The television show “Supergirl” debuted in 2015. The title character is portrayed by Melissa Benoist, an actress who found fame playing Marley rose in the show “Glee”.

“To decimate” is wipe out a large proportion of a population. The term arose in the from the ancient practice of punishing military units found guilty of mutiny. One in ten soldiers in the rebellious group would be executed, with the choice made in a lottery. The term comes from the Latin “decimare” meaning “to remove one-tenth”.

Rhode Island is the smallest state in the union, but is the second most densely populated. (after New Jersey). Rhode Island is known as the Ocean State, largely because about 14% of the state’s area is made up of ocean bays and inlets. Exactly how Rhode Island got its name is a little unclear. What is known is that way back in 1524, long before the Pilgrims came to New England, the Italian explorer Giovanni da Verrazzano likened an island in the area to the Island of Rhodes in the Mediterranean. There were subsequent references to “Rhode Island” in English publications, before the colonists arrived.

69…Incidentally, in texting … and a hint to three long puzzle answers..BTW

“RoboCop” is a film that was released in 1987, starring Peter Weller in the title role. Weller wore a very impressive “robot” suit for the film, the most expensive item on the set, costing over a million dollars. Weller would lose three pounds a day in sweat alone as temperatures inside the suit went to over 100 degrees F.

Our word “cellar” comes from the Latin “cellarium”, meaning “pantry, storeroom”. The literal translation of the Latin is “group of cells”.

A “stogie” (also “stogy”) is both a “rough, heavy shoe” and a “long, cheap cigar”. Both items were favored by the drivers of the covered wagons called “Conestogas” that wended their way across the Midwest in days gone by. The term “stogie” is derived from the name of the wagon, which itself is named after the area in which the wagons were built: Conestoga, near Lancaster, Pennsylvania.

The West Highland White Terrier is a cute-looking little white dog from Scotland. The “Westie” looks very much like a related breed, the little black Scottish Terrier. The two breeds can be seen sitting side-by-side on the famous label of Black & White Scotch whisky.

Control-Alt-Delete is a keyboard command on IBM PC compatible systems used for a soft reboot, or more recently to bring up the task manager in the Windows operating system. Bill Gates tells us that the command was originally just a device to be used during development and was never meant to “go live”. He once said that “Ctrl+Alt+Del” was a mistake, and that he would have preferred a dedicated key on the keyboard that carried out the same function.

Superman was sent to Earth in a rocket as a child by his parents who were living on the doomed planet of Krypton. On Earth he was discovered by the Kents, farmers who lived near the fictional town of Smallville. The Kents raised the infant as their own, giving him the name Clark.

Lois Lane has been the love interest of Superman/Clark Kent since the comic series was first published in 1938. Lois and Clark both work for the big newspaper in the city of Metropolis called “The Daily Planet”. The couple finally got hitched in the comics (and on television’s “Lois and Clark”) in 1996. But never mind all that … one has to wonder how challenging the crossword is in “The Daily Planet” …

45…Ugly duckling, as we learn later..SWAN

Hans Christian Andersen’s tale “The Ugly Duckling” has to be one of the most endearing ever written. Unlike so many “fairy tales”, “The Ugly Duckling” isn’t based on any folklore and simply a product of Andersen’s imagination. It is speculated that Andersen was the illegitimate son of the Crown Prince of Denmark, and that he wrote the story of the ugly duckling that turned into a beautiful swan as a metaphor for the secret royal lineage that was within Andersen himself.

Because I was rapped on the knuckles with a ruler at school for using bad grammar as a kid many moons ago, I cringe when I hear phrases like “real easy”. The “real” is modifying the implied verb “to be” as in “it is really easy”, so we should be using the adverb “really” instead of the adjective “real”. But I hear adjectives used as adverbs all the time, and I’ve even seen “real” listed as an “informal adverb” in at least one American dictionary. So, I’ll just whine here and accept the colloquialism. Our crosswords should move with the times, even if I don’t …

37…With the breeze at your back, in sailing..BEFORE THE WIND

51…What it takes to tango..TWO

60…Where the driver sits..BEHIND THE WHEEL

69…Incidentally, in texting … and a hint to three long puzzle answers..BTW

11…”You’re getting too excited”..CALM DOWN

44…Whenever you want to..AT WILL

45…Ugly duckling, as we learn later..SWAN

52…What an unruly courtroom lacks..ORDER