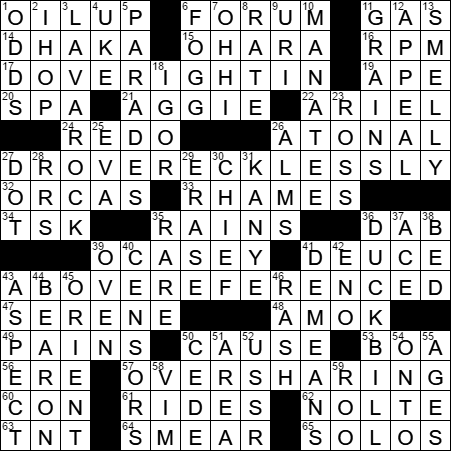 Today’s themed answers each include the hidden word OVER, which is SHARED between the first and second words of the answer:

Freon is a DuPont trade name for a group of compounds used as a refrigerant and also as a propellant in aerosols. Freon is used in the compressors of air conditioners as a vital component in the air-cooling mechanism. Freon used to contain chlorofluorocarbons (CFCs), which had a devastating effect on the Earth’s ozone layer. Use of CFCs is now banned, or at least severely restricted.

Neon was discovered in 1898 by two British chemists Sir William Ramsay and Morris Travers who chilled a sample of air, turning it into a liquid. They warmed the liquid and separated out the gases that boiled off. Along with nitrogen, oxygen and argon (already known), the pair of scientists discovered two new gases. The first they called “krypton” and the second “neon”. “Krypton” is Greek for “the hidden one” and “neon” is Greek for “new”.

Dhaka (once “Dacca”) is the capital city of Bangladesh. Dhaka is known for many things, including production of the finest muslin in the world. It’s also the rickshaw capital of the world, with about 400,000 rickshaws running each day.

The beautiful and talented Maureen O’Hara is an Irish actress, famous for her films made with fellow actor John Wayne and the director John Ford. Soon after color films hit the theaters, O’Hara earned the nickname “Queen of Technicolor”. This was because the combination of her vivid red hair and bright green eyes showed off the new technology to full advantage. O’Hara was born in a suburb of Dublin called Ranelagh, indeed where many of my own ancestors were born …

The first vinyl records designed to play at 33⅓ rpm were introduced by RCA Victor in 1931, but were discontinued due to quality problems. The first Long Play (LP) 33⅓ rpm disc was introduced by Columbia Records many years later in 1948, with RCA Victor following up with a 45 rpm “single” the following year, in 1949.

Seán O’Casey was an Irish playwright noted for his works exploring the plight of the working class in Dublin. O’Casey’s most famous works are “Juno and the Paycock” and “The Plough and the Stars”.

Emily Dickinson wrote nearly 1800 poems in her lifetime, with less than a dozen published before she died in 1886. Emily’s younger sister discovered the enormous collection, and it was published in batches over the coming decades.

The actor Nick Nolte got his big break playing opposite Jacqueline Bisset and Robert Shaw in “The Deep”, released in 1976. Prior to that he had worked as a model, and in fact appeared in a magazine advertisement for Clairol in 1972 alongside fellow model Sigourney Weaver.

The 1991 film called “Cape Fear” is a Martin Scorsese remake of a 1962 movie of the same name. The 1991 version stars Robert De Niro and Nick Nolte, and there are also cameo appearances by Robert Mitchum and Gregory Peck who starred in the 1962 original.

There’s a fairly contemporary legend that’s well reported in Hawaii concerning lava rock. Known as Pele’s curse, the myth is that any visitor taking rock or sand from any of the islands will have bad luck, until the rock or sand is returned.

“Around the World in 80 Days” is a wonderful adventure story, written by French author Jules Verne and first published in 1873. There have been some great screen adaptations of the story, including the 1956 movie starring David Niven as Phileas Fogg. In almost all adaptations, a balloon is used for part of the journey, perhaps the most memorable means of transportation on Fogg’s trip around the world. However, if you read the book, Fogg never used a balloon at all.

9. Sch. with a Providence campus : URI

The University of Rhode Island (URI) was first chartered as an agricultural school, back in 1888. URI’s main campus today is located in the village of Kingston.

Manatees, also known as sea cows, are very large marine mammals that can grow to 12 feet in length. The manatee is believed to have evolved from four-legged land mammals and probably shares a common ancestor with the elephant.

Limburger is a delicious, strong-smelling cheese from Germany. It originated in the Duchy of Limburg which was located partly in the modern-day Netherlands, Belgium and Germany.

Legend has it that Betsy Ross made the first American flag for General George Washington. However, this story only surfaced during the centennial celebrations of 1876, and although Betsy Ross was indeed one of several flag makers in Philadelphia in the days of George Washington, sadly there’s no definitive evidence that Ross provided that first stars and stripes.

Railroads (RRs) are companies (cos.) that operate a lot of railroad crossings (Xings).

The platypus is one of only five mammalian species that we know of that lay eggs rather than give birth to live young. The platypus is a native of Eastern Australia, and it is a weird creature to say the least. It’s appearance is bizarre enough, with it’s bill that resembles that of a duck, but it is also poisonous. The platypus has a spur on it hind foot that can inject venom and cause severe pain in humans.

Brian Eno was one of the pioneers of the “ambient” genre of music. Eno composed an album in 1978 called “Ambient 1: Music for Airports”, the first in a series of four albums with an ambient theme. Eno named the tracks somewhat inventively: 1/1, 2/1, 2/1 and 2/2.

The Komitet gosudarstvennoy bezopasnosti (KGB) was the national security agency of the Soviet Union until 1991. The KGB was dissolved after the agency’s chairman led a failed attempt at a coup d’état designed to depose President Mikhail Gorbachev.

The name “kangaroo” comes from the Australian Aborigine term for the animal. There’s an oft-quoted story that the explorer James Cook (later Captain Cook) asked a local native what was the name of this remarkable-looking animal, and the native responded with “kangaroo”. The story is that the native was actually saying “I don’t understand you”, but as cute as that tale is, it’s just an urban myth.

In Australia, the land outside of urban area is referred to as “the outback” or “the bush”. That said, I think that the term “outback” can also be used for the more remote parts of the bush.

1. Prepare for a bodybuilding competition : OIL UP

17. Began without hesitation : DOVE RIGHT IN

26. Without a musical key : ATONAL

27. Was heedless behind the wheel : DROVE RECKLESSLY

9. Sch. with a Providence campus : URI