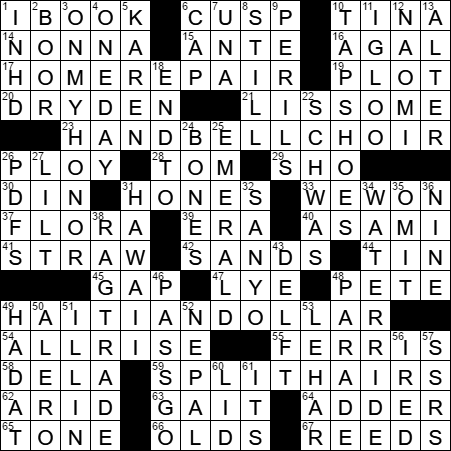 Each of today’s themed answers features the letter string HAIR that have been SPLIT between the beginning and end of the answer:

“(I’ve Got a Gal in) Kalamazoo” is a song made famous by Glenn Miller and his Orchestra.

“Lissome” is such a lovely word, I think. It applies to something that is easily bent and supple. The term is a variation of “lithesome”.

The first set of tuned handbells was manufactured at the around 1700 in England. Sets of handbells were first used by church bell ringers so that they could practice as a group outside of the bell tower.

Tom Hiddleston is an English actor who garnered international attention when he was given the role of Loki in the superhero film “Thor” (2011). More recently, I enjoyed Hiddleston’s performance in the excellent thriller miniseries “The Night Manager” that’s based on a John le Carré novel.

Clayton Kershaw is a pitcher for the LA Dodgers. Outside of baseball, Kershaw is noted for his charitable work, especially his efforts to raise money for an orphanage in Zambia.

That would be a “generation gap”.

The gourde is the currency of Haiti, and is divided into 100 centimes. The gourde has been pegged to the US dollar since 1912, at a value of 5 gourdes to the dollar. As a result, five gourdes are sometimes referred to as a Haitian dollar, and 5 contimes as a Haitian penny.

The first Ferris Wheel was built for the Chicago World’s Fair in 1893. That wheel was designed and constructed by George Washington Gale Ferris, Jr. who lent his name to wheels built from then on.

According to the World Organization of the Scout Movement, the Scout Promise is:
On my honour I promise that I will do my best—
To do my duty to God and my Country
To help other people at all times and
To obey the Scout Law.

The Scottish actress Karen Gillan is most famous for playing Amy Pond in the “Doctor Who” sci-fi show made by the BBC. Amy Pond was the companion to the eleventh doctor, played by Matt Smith. More recently, Gillan has been playing Nebula in the “Guardians of the Galaxy” series of films.

“Guardians of the Galaxy” is a 2014 film based on a team of superheroes from the Marvel Comics universe. The movie’s cast is very impressive, including Chris Pratt, Bradley Cooper, Glenn Close and Benicio del Toro. I don’t normally “do” superhero films, but I quite enjoyed this one. That said, I think my appreciation was swayed by the soundtrack that features a great list of songs from the sixties and seventies.

Fred Astaire’s real name was Frederick Austerlitz. Fred was from Omaha, Nebraska and before he made it big in movies, he was one half of a celebrated music hall act with his sister Adele. The pair were particularly successful in the UK, and Adele ended up marrying into nobility in England, taking the name Lady Charles Cavendish.

The actress Naomi Watts was born in the UK and moved to Australia when she was 14 years of age. It was in Australia that Watts got her break in television and movies. Probably her most acclaimed role was in the 2003 film “21 Grams” with Sean Penn and Benicio del Toro. Watts is best friends with fellow Australian actress Nicole Kidman.

“Mulholland Drive” is a thriller released in 2002 that was well received by the critics (although I didn’t like it!). The original idea was for “Mulholland Drive” to be a pilot for a television series, but when ABC saw the filmed pilot they didn’t like it and so passed on it for their schedule. The script was rewritten, some new scenes shot, and after re-editing the movie was released.

I guess it depends on how you pronounce the word, but the two schwas in the word “America” would be the letters A.

A “schwa” is an unstressed and toneless vowel found in a number of languages including English. Examples from our language are the “a” in “about”, the “e” in “taken” and the “i” in pencil.

Sanyo is a Japanese electronics manufacturer based near Osaka and founded in 1947. The company name means “three oceans” reflecting the company’s original aim to sell its products all around the world (across three oceans: the Atlantic, the Pacific and the Indian).

The Disneyland ride called Splash Mountain is inspired by the 1946 Disney movie “Song of the South”, which in turn is based on the “Uncle Remus” stories featuring Br’er Rabbit and friends. The most famous song heard while on the ride is “Zip-A-Dee-Doo-Dah”, which comes from the film’s soundtrack. Splash Mountain made its debut in 1989 in Disneyland in Anaheim. The same ride opened in Disneyworld in florida and Tokyo Disneyland in 1992. The “splashy” ride was deemed unsuitable for Disneyland Paris due to the frequent cold weather in that part of Europe.

Delft is a city in the Netherlands located between Rotterdam and the Hague. Delft is noted for its pottery and was also home to one of my favorite painters: Johannes Vermeer.

Nepal lies to the northeast of India in the Himalayan mountain range. Today, the state is known as the Federal Democratic Republic of Nepal. In 2008, the Communist Party of Nepal won the country’s general election. Soon after, the Assembly voted to change the form of government, moving away from a monarchy and creating a secular republic.

Franz Lehar was a Hungarian composer who had a difficult relationship with the Nazi regime after it took control of his country. His wife was born Jewish, but converted to Catholicism. Fortunately for the Lehars, Hitler enjoyed the composer’s music and as a result Goebbels intervened and made Sophie Lehar “an honorary Aryan by marriage”.