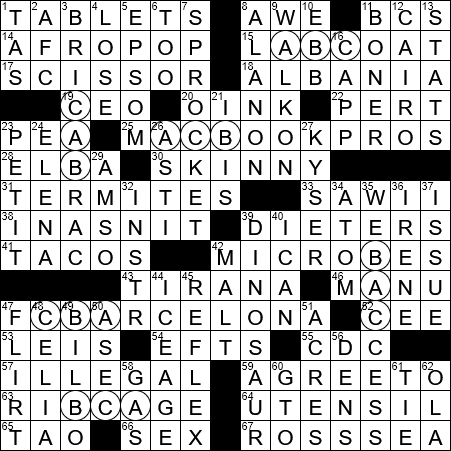 Themed answers each include the letter string “ABC”. Those letters are in a different order in each themed answer:

Ladysmith Black Mambazo is a male choral group that came to prominence singing with Paul Simon his 1986 album “Graceland”. The group is from South Africa, and their style of music is referred to as Afro-Pop.

King Sunny Adé is a musician from Nigeria. He is a pioneer of what’s called world music, a genre that encompasses many styles of music from all around the globe.

18 Adriatic country whose flag has a double-headed eagle : ALBANIA

The Albanian flag is red, with a black, double-headed eagle in the center. The flag’s basic design was adopted in 1912 when Albania finally gained its independence from the Ottoman Empire.

The Adriatic is the sea separating Italy from the Balkans.

The MacBook Pro is the high-end model in Apple’s MacBook family of portable computers.

I didn’t watch the HBO series called “The Wire” when it first aired. We ending up buying all five series on DVD and we watched the whole thing several years ago. It’s is a great drama series, and I thoroughly recommend it. Personally, I think that HBO produces some of the best dramas on American television.

The “Saw” franchise of movies is gruesome in the extreme. I’ve only seen a few minutes of “Saw” footage (accidentally). The storylines center on imprisoned victims who are faced with having to mutilate themselves in order to escape. Ugh …

43 18-Across capital : TIRANA
(18A Adriatic country whose flag has a double-headed eagle : ALBANIA)

Tirana is the capital of Albania, and the nation’s largest city.

Manchester United (“Man U”) is one of the most successful football (soccer) clubs in England, having won more League titles than any other in the history of the game. The club is also famous for an airplane crash known as the 1958 Munich air disaster. The British European flight crashed during takeoff, resulting in the death of 23 passengers including eight members of the Manchester United team.

“Barça” is the nickname of the soccer club FC Barcelona (Futbol Club Barcelona). Barcelona is one of the most financially successful football clubs in the world in terms of revenue, along with the likes of Manchester United, Real Madrid and Bayern Munich.

On the keyboard of a standard piano, the fourth C-key from the left is in the center of the keyboard and is referred to as “middle C”.

The thorax is another name for the chest, the part of the human body between the neck and the diaphragm.

2 Org. with Colts and Broncos : AFC

Boner is one of those terms that I just don’t like because it can be used offensively. “Boner” can be used to mean “faux pas, error”.

Tahrir Square is a major location in Cairo, Egypt. The name “Tahrir” translates to “Liberation” in English. The square was a focal point in the 2011 Egyptian Revolution staged against former president Hosni Mubarak.

Al Capp was a cartoonist from New Haven, Connecticut who is best remembered for cartoon strip “Li’l Abner”. Capp created “Li’l Abner” in 1934 and drew it himself until 1977. Capp passed away two years after “Li’l Abner” was retired.

Kay Kyser was popular bandleader in the thirties and forties. He was known as the “Ol’ Professor of Swing”, mainly because he hosted an act called “Kay Kyser’s Kollege of Musical Knowledge”. That act incorporated a quiz and music.

Celia Cruz was born and bred in Cuba, but spent most of her working life in the United States, playing out her salsa singing career in New Jersey. Around the world, Cruz was known as the “Queen of Salsa”.

By definition, a “muscle car” is a small vehicle with a large and maybe oversized engine.