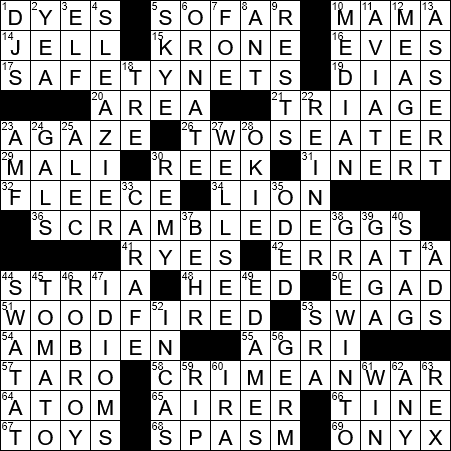 Themed answers end with a type of EGG, but that egg has been SCRAMBLED, has been anagrammed:

The story of “Goldilocks and the Three Bears” was first recorded in 1837, in England, although the narrative was around before it was actually written down. The original fairy tale was rather gruesome, but successive versions became more family-oriented. The character that eventually became Goldilocks was originally an elderly woman, and the three “nameless” bears became Papa Bear, Mama Bear and Baby Bear.

Greenland is the largest island on the planet. Geographically, Greenland is part of the continent of North America, but culturally and politically is considered part of Europe. The island became a Danish colony in 1815, and joined the European Economic Community (EEC) with Denmark. Greenland withdrew from the EEC after a referendum in 1983. Since 2009, Greenland has been relatively autonomous, with the Danish government retaining control of foreign affairs, defence and the judicial system.

The area of a rectangle is calculated by multiplying the length of one side (base) by another side (height).

The Boxster is a roadster built by Porsche that was introduced in 1996. The name “Boxster” comes from a melding of “boxer” and “roadster”. A “boxer” engine (also “flat” engine) is one in which the pistons move in a horizontal plane, with the cylinders laid out in two rows opposing each other.

The Islamic Republic of Mauritania is a country on the Atlantic coast of North Africa. The nation is named after the old Roman province of Mauretania, although the ancient province was located further north in what is now Morocco and part of Algeria.

“Errata” is the past participle of the Latin word “errare” meaning “to err”. We use “errata” (singular “erratum”) to mean a list of errors that have been noted in some publication.

A stria (plural “striae”) is a linear mark or groove on a surface, often one of a series of parallel lines.

When I was growing up on the other side of the pond, a drapery was a shop where one could buy cloth for making clothes or curtains. It was only when I came to America that I heard the term “drapes” used for curtains.

“The Charge of the Light Brigade” is a narrative poem by Alfred, Lord Tennyson published in 1854, just two months after the “Charge” took place at the Battle of Balaclava during the Crimean War. Apparently, Tennyson took only a few minutes to write the poem, after reading two accounts of the military engagement in “The Times” of London. Here’s the first of the six verses:

Here in the US, the area separating opposing lanes of traffic on a divided highway called the “median strip”. Over in the UK, that median strip is known as the “central reservation”.

The great director and actor Rob Reiner first came to prominence playing “Meathead”, Archie and Edith Bunker’s son-in-law in “All in the Family”. Since then, Reiner has directed a long string of hit movies including, “The Princess Bride”, “Stand by Me”, “This Is Spinal Tap”, “When Harry Met Sally”, “Misery” and “A Few Good Men”.

“Stand by Me” is 1986 film directed by Rob Reiner that is based on a Stephen King novella called “The Body”. The title of the movie comes from the wonderful Ben E. King song of the same name.

Rémy Cointreau is a French supplier of alcoholic beverages that formed in the early 1990s with the merger of Rémy Martin and Cointreau.

The Behr brand of paint is pronounced “bear”, and the cans even have a bear logo. The company was founded in 1947 by Otho Behr, Jr.

The Ames Brothers were a singing quartet who were active in the 1950s. The “Ames” brothers were actually the “Urick” brothers, and used “Ames” as a stage name. They had started out as an act called the Amory Brothers. After the quartet disbanded in 1961, Ed Ames went on to have a successful solo singing career, and became a familiar television actor. Ed played Mingo, the sidekick to the title character on the TV show “Daniel Boone” that ran in the sixties.

Yo La Tengo is an indie rock band from Hoboken, New Jersey that formed in 1984 as the husband/wife duo Ira Kaplan and Georgia Hubley. The band’s name translates from Spanish as “I have it”, and was chosen with reference to a baseball anecdote. Elio Chacon was a baseball player from Venezuela, the seventh person to play in the Majors from that country. There’s a story that Mets center fielder Richie Ashburn was always running into Elio Chacon in the outfield, because he would call for the ball in English, and Chacon only understood Spanish. Ashburn started to call for the ball in Spanish “Yo la tengo!” (I’ve got it!), at which point he’d be run down by left fielder Frank Thomas who only understood English!