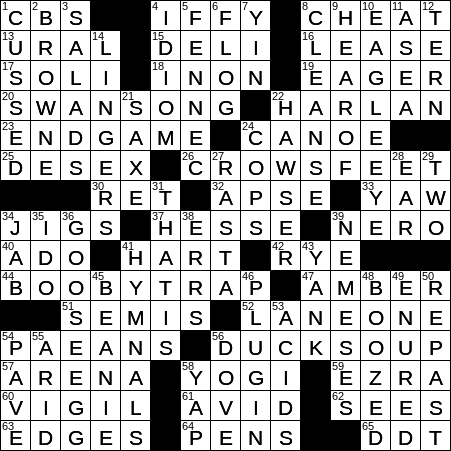 Themed answers are two-word phrases starting with a bird:

13 River to the Caspian : URAL

The Caspian Sea is a landlocked body of water lying between Asia and Europe. By some definitions, the Caspian is the largest lake on the planet. The name “Caspian” comes from the Caspi people who lived to the southwest of the sea in South Caucasus.

The phrase “swan song” is used for a final gesture, a last performance. The expression derives from an ancient belief that swans are silent for most of their lives, but sing a beautiful song just before they die.

Harlan Ellison was an author, mainly of speculative fiction and science fiction. He was famous, or perhaps infamous, for his abrasive and argumentative personality. Apparently, he was proud of reputation, and indeed the dust jacket of one of Ellison’s own books described him as “possibly the most contentious person on Earth.”

“Steppenwolf” is a 1927 novel by German-Swiss author Hermann House. The title translates from German as “Steppe Wolf”, referring to a wolf found primarily in the steppes of Europe and Asia.

The origins of the phrase “duck soup”, meaning anything easily done, aren’t very clear. However, the expression does at least date back to 1908.

Yogi Bear made his debut for Hanna-Barbera in 1958, on “The Huckleberry Hound Show” before he was given his own series. Do you remember that collar that Yogi wore around his neck? That was a little trick from the animators. By using the collar, for many frames all they had to do was redraw everything from the collar up, saving them lots and lots of time. Yogi and Boo Boo lived in Jellystone Park, and made Ranger Smith’s life a misery.

“Justice League” is a 2017 superhero film that is a sequel to the 2016 movie “Batman v Superman: Dawn of Justice”. It was one of the most expensive films ever made, with a budget of $300 million. And, it bombed …

American singer-songwriter Jackson Browne was actually born in Heidelberg, Germany. Browne’s father was stationed there with the US Army.

“Doctor My Eyes” is a 1972 song written by Jackson Browne that appeared on his debut album titled “Jackson Browne”. Backing vocals were provided by David Crosby and Graham Nash of the Crosby, Stills and Nash.

The fennec fox is a small fox found in the deserts of North Africa and the Middle East. It is a crepuscular animal, meaning that it is active around dawn and dusk. The name “fennec” comes from the Berber word “fanak” meaning “fox”. It is the national animal of Algeria, and in the Algerian national soccer team are nicknamed “Les Fennecs”.

A hawser is a thick cable or rope that is used for mooring or towing a ship. The term “hawser” comes from he Old French word “haucier” meaning “hoister”.

27 Many a reggae artist : RASTA

The use of the phrase “goose egg” to mean “zero” is baseball slang that dates back to the 1860s. The etymology is as expected: the numeral zero and a goose egg are both large and round.

56 Jackknifed into the pool, say : DOVE

A jack-knife is a pocket knife with a folding blade. The term “jack-knife” goes back at least to the early 1700s, and might possibly have referred to a knife used by sailors (i.e. jack tars). The use of “jack-knife” to describe a folding swimming dive dates back to 1922.