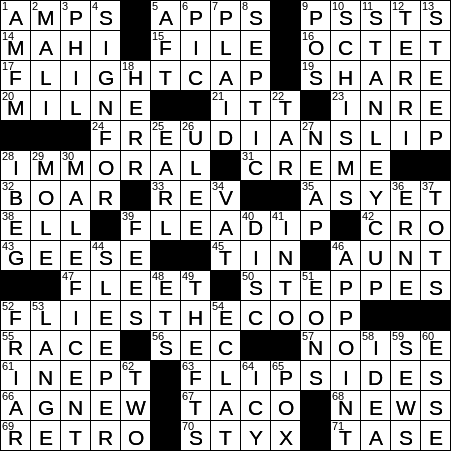 Themed answers are bounded by the letters FLIP:

A Freudian slip is a error that is interpreted as being due to an unconscious wish for the same outcome. Named for psychoanalyst Sigmund Freud, the “slip” is also called a parapraxis.

Remains of early man, dating back to 35,000 years ago, were found in Abri de Cro-Magnon in southwest France, giving the name to those early humans. Cro-Magnon remains are the oldest human relics that have been discovered in Europe.

I hope she doesn’t fall out of it …

The most famous armada was the Spanish fleet that sailed against England in order to overthrow Queen Elizabeth I in 1588. It failed in its mission, partly due to bad weather encountered en route. Ironically, the English mounted a similar naval attack against Spain the following year, and it failed as well.

A steppe is a grassland that is devoid of trees, apart from those growing near rivers and lakes. The term “steppe” is Russian in origin, and is used to describe the geographical feature that extends across Eurasia. In South Africa, the same feature is called a “veld”, and in North America it is called a “prairie”.

The Old English word “cypa”, meaning “basket”, evolved in the 14th century to the word “coop” to describe a small cage for poultry. We still use that word today.

Gerald Ford was the only person to have served as both Vice President and President of the US, without having been elected to those positions. Ford was nominated by President Richard Nixon to replace Vice President Spiro Agnew after he resigned in 1973. Vice President Ford assumed the presidency the following year after President Nixon resigned.

The River Styx in Greek mythology was the river that formed the boundary between the Earth and the Underworld (or “Hades”). The souls of the newly dead had to cross the River Styx in a ferry boat piloted by Charon. Traditionally, a coin would be placed in the mouths of the dead “to pay the ferryman”.

Phil Mickelson is one of the most famous left-handed golfers currently playing on the PGA Tour. Less well known is the fact that outside of golf, he is right-handed. Despite his great success as a golfer, the US Open championship has always eluded him. He has finished runner-up six times, more times than any other player.

A septic tank is a sewage system that resides locally beside a house, on the property i.e. “on-lot”.

12. Purple-haired twin on “The Simpsons” : TERRI

Sherri and Terri Mackleberry are identical twin sisters on “The Simpsons” television show. They are classmates of Bart Simpson, and their father is Homer’s supervisor at the Springfield Nuclear Power Plant.

“Ulee’s Gold” is a highly respected film from 1997 in which Peter Fonda plays the title role of Ulee. Ulee’s “gold” is the honey that Ulee produces. It is a favorite role for Peter Fonda and he has shared that playing Ulee brought to mind his father Henry Fonda, who himself kept a couple of hives. So if you see Peter Fonda in “Ulee’s Gold” you’re witnessing some characteristics that Peter saw in his father.

“American Horror Story” is a horror television show … I don’t do horror.