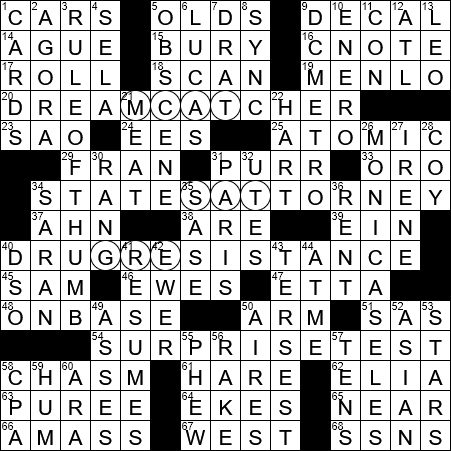 Themed answers each contain a sequence of circled letters. Each SURPRISE sequence of letters is the abbreviated name of a TEST endured by schoolgoers:

Oldsmobile introduced the Cutlass in 1961, and used the name on a succession of models right up to 1999.

“Buck” is a slang term for “dollar”. The term has been around at least since 1856, and is thought to derive from the tradition of using buckskin as a unit of trade with Native Americans during the frontier days.

A dreamcatcher is a willow hoop surrounding a woven net, and which is often adorned with feathers or beads. The term “dreamcatcher” is somewhat misleading. The Ojibwe Native American people, who made the original dreamcatchers, used them as protective charms for infants to ward off evil. As dreamcatchers became commercialized, a story developed that the web was designed to catch bad dreams, while allowing good dreams to pass through and float down the hanging beads and feathers to the sleeping child.

25. Type of energy or reactor : ATOMIC

Fran Tarkenton is a former football player who played for the Minnesota Vikings and the New York Giants. Tarkenton has had quite the life after retiring from football in 1978. He co-wrote a murder-mystery novel, several self-help books and started his own software company.

The actor Philip Ahn is perhaps best known for playing Master Kahn, one of Caine’s teachers on the television show “Kung Fu”. Ahn was the first Asian-American actor to receive a star on the Hollywood Walk of Fame.

The exact origin of the phrase “rule of thumb” appears to be unclear. However, the expression does exist in languages other than English, although the wording can vary. In Finnish and German the equivalent is “rule of fist”, and in Hebrew the phrase is “rule of finger”.

The actress Sela Ward turns up in crosswords a lot. Ward played Teddy Reed in the TV show “Sisters” in the nineties, and was in “Once and Again” from 1999-2002. I don’t know either show, but I do know Ward from the medical drama “House” in which she played the hospital’s lawyer and Greg House’s ex-partner. That was a fun role, I thought. Ward also played a lead role on “CSI: NY” and was a very welcome and much-needed addition to the cast.

The producer and director George Lucas has amassed an incredibly large fortune, primarily due to the phenomenal success of his movie franchises “Star Wars” and “Indiana Jones”. Worth about $3 billion, Lucas has gone the way of Bill Gates and Warren Buffett, agreeing to give half of his fortune to charity as part of “The Giving Pledge”.

Hollywood star Leonardo DiCaprio is from Los Angeles, California. DiCaprio’s mother was visiting a museum in Italy when she was pregnant and felt the first kick of her unborn child. At the moment of that first kick, Mama DiCaprio was looking at a painting by Leonardo da Vinci, and so named her son Leonardo.

Monica Seles has a Hungarian name as she was born to Hungarian parents, in former Yugoslavia. Seles was the World No. 1 professional tennis player in 1991 and 1992 before being forced from the sport when she was stabbed by a spectator at a match in 1993. She did return to the game two years later, but never achieved the same level of success.

A “coquet” is a male flirt, with “coquette” being a female flirt. The word comes from French, and is the diminutive of “coq”, the word for a cock.

In William Shakespeare’s play “Romeo And Juliet”, Count Paris is a rival of Romeo’s for the hand of Juliet. At the end of the play, Romeo kills Paris in a duel. There’s a lot of dying in “Romeo and Juliet” …

What’s known as plastic wrap in America, we call cling-film in Ireland. The brand name “Saran” is often used generically in the US, while “Glad” wrap is common down under. Plastic wrap was one of those unintended inventions, a byproduct of a development program to create a hard plastic cover for cars.

The Distinguished Service Order (DSO) is a British military award that is usually presented to officers with the rank of major or higher.