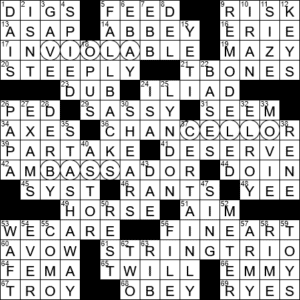 Themed answers each include an instrument in a STRING QUARTET:

Something “inviolable” is secure from “violation”, is sacred.

Back in the days of the Roman Empire, a court of law was enclosed by a “cancellus”, a latticed railing. The usher standing guard as the “cancellus” became known as a “cancellarius”. Over the centuries, the term “cancellarius” was applied to more exalted positions, and evolved in English into “chancellor”.

The double bass (often just “bass”) is usually referred to as the bass fiddle or bass violin in the world of folk and bluegrass music.

Although not a hard-and-fast rule, a string trio usually comprises a violin, viola and cello.

“Eighty-eight” is a slang word for a piano, coming from the fact that a modern piano usually has 88 keys: 36 black and 52 white.

In baseball the first, second and third bases are “bags”, and then there’s home plate.

Spare ribs are so called because “spare” can indicate the absence of fat.