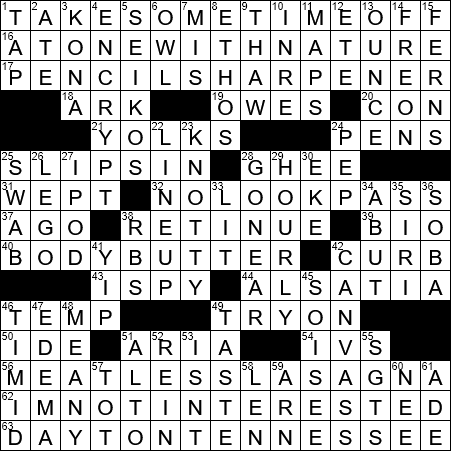 1 Suggestion for stress relief : TAKE SOME TIME OFF

… and work on a crossword.

A paratha is an unleavened flatbread from the Indian subcontinent that is made using a whole wheat dough. It is a thick, layered bread in which the individual folds of dough have been coated with ghee or oil.

A body butter is a moisturizer that contains no water. Whereas body lotions have a high water content to moisturize dry tissue, body butters create an oily barrier aimed at preventing evaporation of moisture from the skin.

Alsatia is the Latin name for the region in France known as Alsace. Alsace is home to Strasbourg, a beautiful city that I had the privilege to visit some years ago. Strasbourg is home to many international organizations, including the European Court of Human Rights.

In chemistry, when a metal combines with a nonmetal, the nonmetal is often given the suffix “-ide”. One example would be iron sulfide, made from iron (a metal) and sulfur (a nonmetal).

The Aria hotel on the Las Vegas Strip opened at the end of 2009. Architecturally, it is noted for a design that minimizes energy consumption. In fact, it is the largest hotel in the world to have earned a LEED Gold certification.

The Tennessee city of Dayton was settled around 1820, when it was known as Smith’s Crossroads. It was renamed in 1877 for Dayton, Ohio. Famously, Dayton, Tennessee was home to science teacher John T. Scopes, who insisted on teaching the theory of evolution in his science class. The resulting Scopes “Monkey” Trial also took place in Dayton.

In 1925, Tennessee passed the Butler Act which made it unlawful for a public school teacher to teach the theory of evolution over the Biblical account of the origin of man. The American Civil Liberties Union (ACLU) sought to challenge this law and found a test case of a Tennessee high school teacher named John Scopes, who was charged with violating the law by presenting to his students ideas put forth by Charles Darwin. Celebrity lawyers descended on the small town of Dayton, Tennessee to argue the case. Three-time presidential candidate William Jennings Bryan prosecuted the case, and famed defense attorney Clarence Darrow spoke for John Scopes. At the end of a high-profile trial, Scopes was found guilty as charged and was ordered to pay a fine.

Kona coffee is cultivated on the Big Island of Hawaii, on the slopes of Mauna Loa and Hualalai, two of the five volcanoes on the island. Coffee plants were brought to Kona in 1828 and late in the 19th century, coffee became a viable and worthwhile crop. Today Kona is one of the most expensive and popular coffees in the world.

Barn owls are very effective at keeping down the population of rats, and have been used for this reason for centuries. However, the use of rat poison takes a toll not only on rats, but on small mammals like voles and mice, and indeed on barn owls who feed on such creatures.

7 Appropriate prefix for an embezzler? : MIS-

As in “misappropriation” of funds, perhaps?

12 Tanning time on the Riviera : ETE

Our contemporary term “pep”, meaning “vigor, energy”, is a shortened version of “pepper” that used to have the same meaning.

42 Solicit support from, as voters : CANVASS

To canvass is to pass through a group of people in order determine opinions. At the start of the 16th century, “to canvass” meant “to toss in a canvas sheet for the purpose of sifting”. This meaning evolved into the figurative usage “to examine carefully”. Nowadays, the word “canvass” can describe both the determination of support for a political candidate, as well as the solicitation of votes.

The type of horse tack known as a bit is placed in a horse’s mouth and is used to aid communication of instruction from rider to mount. The bit is held in place by means of a bridle around the head, and is controlled by the rider using the attached reins.

“Ironic” is a 1996 song co-written and recorded by Alanis Morissette. A couple of lines in the song are:

For an awards ceremony in 2004, Morissette changed these lyrics to demonstrate support for same-sex marriage: