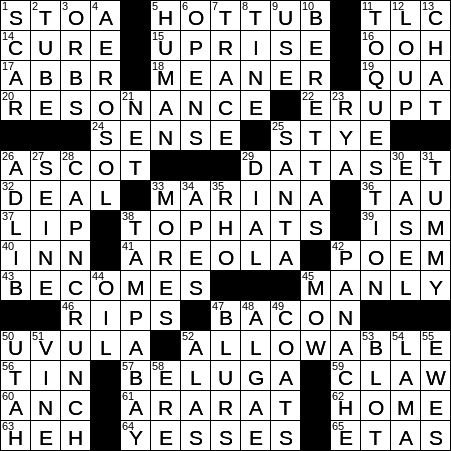 Themed answers are all in the down-direction. The TOP of each answer is a type of HAT:

“Waterfalls” was a hit in 1995 for girl group TLC. It was to become the band’s signature song, and is notable in that it is the first number-one song to reference AIDS. In fact, “Waterfalls” also mentions the illegal drug trade and promiscuity.

Windsor Castle is located on the River Thames in Berkshire, just 20 miles outside London. It was built in the early 11th century by William the Conqueror after the Norman invasion of England. Queen Elizabeth II likes to spend her weekends at Windsor. She has lots of room to move around there, as it’s the largest inhabited castle in the world.

ChapStick is a brand of lip balm produced by Pfizer, although the brand is so popular that the term “chapstick” tends to be used generically. ChapStick was invented way back in the 1880s by a Dr. Charles Browne Fleet in Lynchburg, Virginia.

“Newhart” is a very entertaining sitcom starring Bob Newhart and Mary Frann as innkeepers in rural Vermont. The show is remembered by many for its last episode, which aired in 1990. In that final episode, Bob Newhart wakes up in bed and suggests that the whole of the show’s eight-year run was just a dream. He is lying beside actress Suzanne Pleshette who played his wife in an earlier sitcom “The Bob Newhart Show”. Very, very clever …

The Latin word for tin is “stannum”, and so tin’s atomic symbol is “Sn”. One of the ores used as a source of tin is “stannite”.

Mount Ararat is in Turkey. Ararat is a snow-capped, dormant volcano with two peaks. The higher of the two, Greater Ararat, is the tallest peak in the country. Ararat takes its name from a legendary Armenian hero called Ara the Beautiful (or Ara the Handsome). According to the Book of Genesis, Noah’s ark landed on Mount Ararat as the Great Flood subsided.

62 Word before and after sweet : HOME

We use the word “vestige” for a trace, mark or sign. The term comes from the Latin “vestigium” that also means trace, as well as footprint.

Beretta is an Italian manufacturer of firearms, one that has been selling firearms since 1526! The company got a big boost of sales in the US in the eighties, when it’s Beretta 92 pistol was selected by the US Army for use as its service handgun (although it was known as the “M9” pistol by the US Army).

A werewolf can also be referred to as a “loup-garou”, which is a term borrowed from French.

A rya is a traditional Scandinavian rug, originally used as heavy covers by mariners as an alternative to furs. The name “rya” comes from a village in southwest Sweden.

There are 37 bridges spanning the River Seine in Paris, including 5 pedestrian-only bridges and 2 rail bridges.

28 *Quaker Oats cereal with a naval officer on the box : CAP’N CRUNCH (topped by “cap”)

Mores are the moral attitudes and binding customs of a particular group. Mores are generally not binding in the sense that a law is binding, however social mores often dictate the nature of laws adopted by a society.

The Sunshine Skyway Bridge spans Tampa Bay in Florida, and is just over four miles long. The current bridge opened in 1987, replacing a prior structure that opened in 1954. Part of the old bridge collapsed in 1980 when the freighter MV Summit Venture collided with a pier. The collision caused 35 deaths as six cars, a truck and a Greyhound bus fell 150 feet into the water.

Safflower looks pretty much like a yellow-flowered thistle, with sharp spines on the leaves. For the past five decades the safflower has been cultivated for its seeds, which yield an oil that is similar to sunflower oil.

The gorgeous Arches National Park is located in eastern Utah, just outside of Moab. The main focus of the park is the preservation of over 2,000 natural sandstone arches. The arches are relatively fragile, and 43 have collapsed since 1970, mainly due to erosion caused by wind and rain.