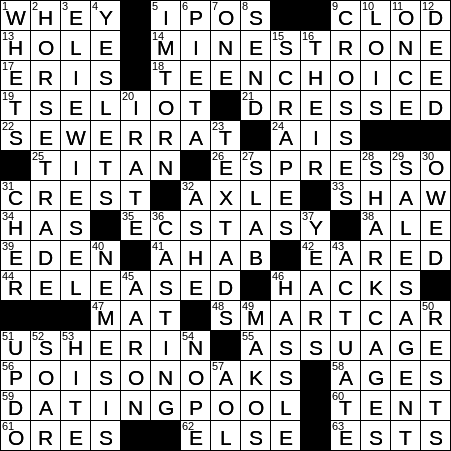 18. Annual awards for which many adolescents vote : TEEN CHOICE

“The Love Song of J Alfred Prufrock”, the famous poem by T. S. Eliot, includes the line “Do I dare to eat a peach?”

“The Lovesong of J. Alfred Prufrock” is a poem by T. S. Eliot that was first published in 1915. The rather odd name of “Prufrock” seems to have just come to Eliot, although there was a Prufrock-Littau Company in St. Louis while he lived there.

Sue Grafton wrote detective novels, and her “alphabet series” feature the private investigator Kinsey Millhone. She started off with “A Is for Alibi” in 1982 and worked her way up to “U is for Undertow” before she passed away in 2017.

Oceanus was a mythical figure and the personification of the enormous river that the ancient Greeks and Romans believed encircled the world. It is from the name “Oceanus” that we get out modern term “Ocean”.

Espresso is made by forcing extremely hot water, under pressure, through finely ground coffee beans. The result is a thick and concentrated coffee drink, which contains quite a lot of solids and a lot of foam. An espresso machine was first patented in 1884 in Italy, although it was a machine to make the beverage in bulk. The first patent for a machine that made individual measures was applied for in 1901, also in Italy.

Irwin Shaw was an author from New York City. Shaw’s most famous works were his novels “The Young Lions” (1948) and “Rich Man, Poor Man” (1970). The former was made into a successful 1958 film of the same starring Marlon Brando, Montgomery Clift and Dean Martin. The latter became a successful TV miniseries of the same name starring Peter Strauss and Nick Nolte.

Here are some famous lines from William Shakespeare’s “Richard II”.

This royal throne of kings, this sceptred isle,
This earth of majesty, this seat of Mars,
This other Eden, demi-paradise,
This fortress built by Nature for herself
Against infection and the hand of war,
This happy breed of men, this little world,
This precious stone set in the silver sea,
Which serves it in the office of a wall
Or as a moat defensive to a house,
Against the envy of less happier lands,
This blessed plot, this earth, this realm, this England.

“David Harum” by Edward Noyes Westcott was a very successful novel when it was first published in 1899. The book is noted for introducing the colloquial term “horse trading” into the language (meaning “shady business practices”).

3. The U.S. Holocaust Memorial Museum Award was renamed for him : ELIE WIESEL

6. Only work Michelangelo ever signed : PIETA

Zora Neale Hurston was an American author, most famous for her 1937 novel “Their Eyes Were Watching God”. Like the author, the main character in the novel is an African American woman, and a part played by Halle Berry in a television movie adaptation that first aired in 2005.

When Cher recorded the 1998 song “Believe”, the audio engineers routinely corrected the sound of Cher’s voice to ensure that all notes were sung with perfect pitch (all singers “cheat”, it seems!). The software that does this pitch correction is called “Auto-Tune”. Then, for a bit of fun, the same engineers played with the Auto-Tune software and created a special effect in her voice that she so liked it was left in the final release. You can easily detect the strange effect if you listen to the song. The process is now called the “Cher Effect” and is used by other artists in their recordings.

The telecom giant Verizon acquired AOL in 2015, and Yahoo! in 2017. Just after the latter purchase, Verizon launched Oath, a subsidiary company that served as the umbrella under which AOl and Yahoo! continued to operate. Oath was renamed to Verizon Media Group after a corporate reorganization at the end of 2018.