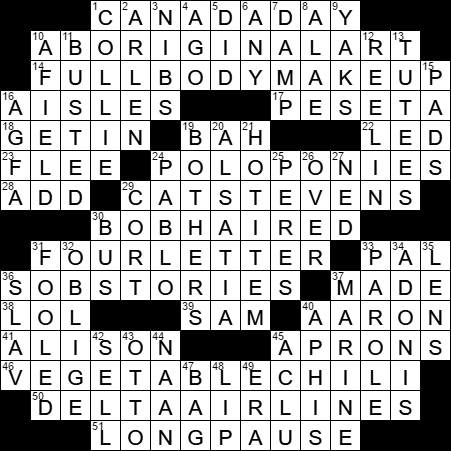 Canada’s national day is known as Canada Day, and has been held on July 1st annually since 1879. The holiday was originally referred to as Dominion Day, and recognizes the date in 1867 when the British colonies of Canada, Nova Scotia and New Brunswick were united into one dominion within the British Empire using the name “Canada”. Dominion Day became Canada Day in 1982.

Andorra is a small principality nestled in the Pyrenees between France and Spain. Andorra is a very prosperous country, mainly due to its status as a tax haven and thriving tourist industry. We used help out the tourist industry there in the winters, enjoying a couple of skiing holidays there. Happy memories …

The phrase “get out of Dodge”, meaning “scram, flee”, is a reference to Dodge City, Kansas. The phrase became a cliché on TV westerns (mainly “Gunsmoke”, I think) and was then popularized by teenagers in the sixties and seventies.

The singer-songwriter that I mainly know by the name “Cat Stevens” has had a few monikers in his life. He was born in London as Steven Georgiou and adopted the stage name “Steve Adams” in the mid-sixties. A year later he changed his stage name to “Cat Stevens”, with which he had most of success. During this time he had hits with classic songs like “Wild World”, “Moonshadow” and “Morning Has Broken”. He also wrote the song “The First Cut Is the Deepest”, which became a hit for four different artists. In 1977, Stevens converted to Islam and took the name Yusuf Islam in 1978.

“Home” is a four-letter word, a word comprising four letters.

Hank Aaron hit his 715th career home run on 8th April 1974, breaking the record of 714 career home runs held by Babe Ruth. Aaron went on to hit 755 home runs prior to his retirement from the game in 1976.

Alison Brie is an actress best known for playing Trudy Campbell, the wife of Pete Campbell, on the TV drama “Mad Men”.

Hartsfield-Jackson Atlanta International Airport is the world’s busiest airport, as measured by passenger traffic. Atlanta has had that distinction since 1998, and was the world’s busiest in terms of take-offs and landings from 2005 until 2013. Over 50% of Atlanta’s traffic comes from Delta Airlines.

The bearded collie is essentially a working dog, although it makes an excellent pet and is very tolerant of high-energy children. The breed originated in Scotland, where it is used to herd sheep and cattle.

Arlen Specter was the US Senator for Pennsylvania, famous for switching from the Republican to the Democratic Party in 2009. In 2010 he lost the Democratic primary and his seat went to Pat Toomey, a Republican. Spector developed a reputation for himself of being hard to work with over the years, earning the nickname “Snarlin’ Arlen”.

Twizzlers candy has been produced since 1845, although back then the only flavor available was licorice. Famously, Twizzlers come in a variety of shapes and sizes, namely Twists, Bites and Nibs. My wife is addicted to strawberry Twizzlers. Can’t stand the stuff myself …

Agfa was founded in Germany in 1867 as a company focused on the manufacture of dyes. The full name of the enterprise was Aktiengesellschaft für Anilinfabrikation, shortened to Agfa, and translating as “Corporation for Aniline (a dye) Production”. Agfa merged with the Belgian company Gevaert in 1894, getting them into the photographic business. Agfa 35mm film hasn’t been produced for a few years now, but there is still inventory out there and purists are buying it when they can.

Alsace is a region in the east of France that we sometimes refer to as Alsatia, its Latin name. Alsace is home to Strasbourg, a beautiful city that I had the privilege to visit some years ago. Strasbourg is home to many international organizations, including the European Court of Human Rights.

Shimon Peres was an Israeli statesman who was born in Poland, in a township that is now part of Belarus. Peres served as President of the State of Israel from 2007 to 2014. Born Szymon Perski, Peres was the oldest head of state in the world while he served as president of Israel. While serving as foreign minister, he represented Israel in the secret negotiations that led to the signing of the Oslo Accords in 1993. For that work, Peres was jointly awarded the Nobel Peace Prize with Yitzhak Rabin and Yasser Arafat.

Benjamin “Bibi” Netanyahu has been the Prime Minister of Israel since 2009. Netanyahu is the only leader of the country to date who was born in the state of Israel. After graduating high school, he served in the Israeli special forces and participated in several combat missions, and was wounded on multiple occasions. After leaving the army in 1972, Netanyahu studied at MIT in the US, earning bachelors degree in architecture and a masters degree in business.

A CBer is someone who operates a Citizens’ Band radio. In 1945, the FCC set aside certain radio frequencies for the personal use of citizens. The use of the Citizens’ Band increased throughout the seventies as advances in electronics brought down the size of transceivers and their cost. There aren’t many CB radios sold these days though, as they have largely been replaced by cell phones.

Ned Flanders lives next door to Homer on TV’s “The Simpsons”. Ned is voiced by actor Harry Shearer and has been around since the very first episode aired in 1989.

Bud Cort is the actor who played the title role in the 1970 film “Brewster McCloud”, and Harold in the 1971 movie “Harold and Maude”.

“Harold and Maude” is a somewhat dark comedy film released in 1971. I found the storyline to be quite bizarre when I saw it many years ago, with a death-obsessed young man taken to driving a hearse as his private vehicle. The young man makes friends with a 79-year-old woman who, like him, is in the habit of attending the funerals of people she never knew. It’s not my cup of tea, quite frankly …

We use the term “bus” for a mode of transportation, an abbreviated form of the original “omnibus”. We imported “omnibus” via French from Latin, in which language it means “for all”. The idea is that an omnibus is a “carriage for all”.

The term “parole” is a French word that we use in English, with the French “parole” meaning “word, speech”. Of particular interest is the French phrase “parole d’honneur” which translates as “word of honor”. In the early 1600s we started using “parole” to mean a promise by a prisoner of war not to escape, as in the prisoner giving his “word of honor” not to run off. Over time, parole has come to mean conditional release of a prisoner before he or she has served the full term of a sentence.

48. In most mammals, the upper one has a groove called a philtrum : LIP

The vertical groove on our upper lip, just under our nose, is known as the philtrum or medial cleft. “Philtrum” is a Latin term coming from the Greek “philtron” meaning “love charm”. Not sure why that is …

36. They may be excuses : SOB STORIES

48. In most mammals, the upper one has a groove called a philtrum : LIP