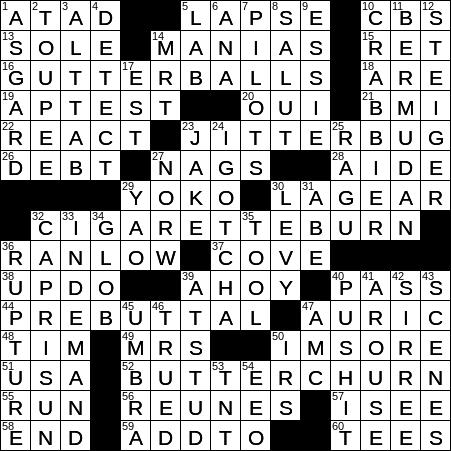 Themed clues include the hidden word “BUTTER”, but the order of the letters has been CHURNED, changed:

“Man With a Plan” is a sitcom starring Matt LeBlanc as Pittsburgh construction worker planning on spending more time at home with the kids after his wife relaunches her career. I watched a few episodes, and put it on my list to binge watch one day …

16. Rolls off the alley : GUTTER-BALLS

The energetic dance known as the jitterbug was popularized in the 1930s by Cab Calloway. Calloway released “Call of the Jitter Bug” in 1934, and appeared in a 1935 musical short titled “Cab Calloway’s Jitterbug Party”.

If you’d like to be a jitter bug,
First thing you must do is get a jug,
Put whiskey, wine and gin within,
And shake it all up and then begin.
Grab a cup and start to toss,
You are drinking jitter sauce!
Don’t you worry, you just mug,
And then you’ll be a jitter bug!

To badger is to harass. The verb “to badger” comes from the cruel practice of badger-baiting, which dates back to medieval times. Badger-baiting is a blood sport in which a dog is used as bait for a badger in its den, to draw it out into the open. The den is an artificial structure built to resemble a natural badgers’ den, complete with a tunnel entrance. The dog is sent down the tunnel causing the badger and dog to lock their jaws on each other. The badger and dog are then removed from the den by pulling on the dog’s tale. Horrible …

“Be My Yoko Ono” was the first single released by the Canadian band Barenaked Ladies.

LA Gear is an athletic shoe manufacturer based in Los Angeles.

A procatalepsis (sometimes “prebuttal”) is a tactic sometimes used by someone making an argument. It involves the speaker raising an objection to their own argument, and then immediately answering that objection. The idea is to deal with any “rebuttals” before the audience can raise them.

“Goldfinger” is the Ian Fleming’s seventh James Bond novel, and was first published in 1959. Fleming was in the habit of naming his characters after people in the real world. The novel’s colorful antagonist Auric Goldfinger was named after Hungarian-born British architect Ernő Goldfinger.

Tim Duncan is professional basketball player from La Croix in the US Virgin Islands. Duncan was a natural swimmer, with his eyes on the 1992 Olympic Games. He was forced to turn his attention to basketball when Hurricane Hugo destroyed St. Croix’s only Olympic-sized pool in 1989.

By pressing the Alt and Tab key at the same time on a PC, a user can alternate between windows open on the desktop. This keyboard shortcut is known as Task Switcher or Flip.

In French, “salut” means “hi”, and is less formal than “bonjour”. The term can also be used as a friendly toast.

Essie Cosmetics is a company that was founded by Essie Weingarten, and which is now owned by L’Oreal. Apparently, Queen Elizabeth II will only wear Essie’s Ballet Slippers color nail polish. Well, that’s what Wikipedia claims …

Oscar the Grouch is the Muppet that lives in a garbage can. Oscar’s persona comes from various sources. He is named after Oscar Brand who was one of the board members of the Children’s Television Workshop, the backers for “Sesame Street” as the Muppets were being developed in the sixties. Oscar’s personality was inspired by an angry waiter that once served Jim Henson (father of the Muppets). The voice was modeled on a grumpy New York cab driver encountered one day by Caroll Spinney, the puppeteer who brings Oscar to life.

Hamilton is the capital of the British Overseas Territory of Bermuda located in the North Atlantic Ocean. The city was founded in 1790 and was named for Henry Hamilton, who was Governor of Bermuda at that time. As recently as 2016, Hamilton has topped the list of the most expensive cities in the world in which to live.

12. “In the Heat of the Night” Oscar winner Rod : STEIGER

Both “jake” and “dandy” are slang words meaning “fine”, as in “things are just dandy”.

Something described as “copacetic” is very fine, very acceptable.

Shinzo Abe first became Prime Minister of Japan in 2006, at which time he was the youngest person to hold the post since WWII and was the first PM born after the war. Abe was in office for less than a year, but was voted in again in 2012. Abe is usually characterized as a right-wing nationalist.

Capri Sun is juice concentrate that was introduced in 1969. The brand is famous for the laminated foil pouches in which the juice is sold.

Sunspots have two parts, the umbra and penumbra. The central umbra is the darkest part of the sunspot, and the penumbra is a lighter surrounding fringe.

Sunspots are dark patches observed on the surface of the sun. They are temporary, and are associated with intense magnetic activity. The darkness is indicative of a localized reduction in temperature. Sunspots tend to occur in pairs, with each spot having opposite magnetic poles. Also, solar flares tend to originate from sunspots.