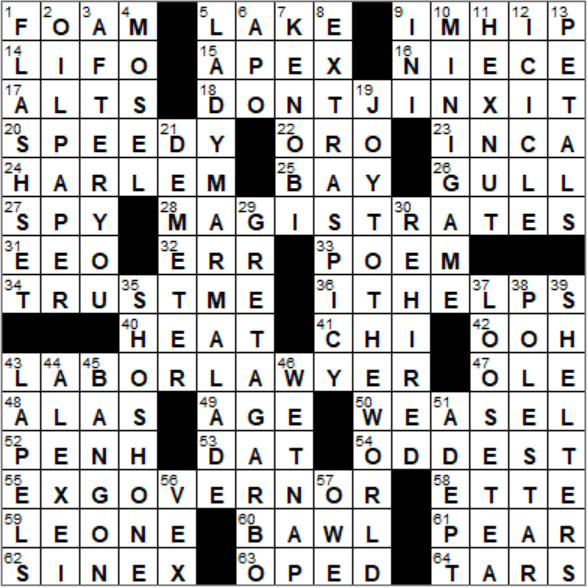 The Apollo Theater in the Harlem district of Manhattan, New York was opened in 1914 as Hurtig and Seamon’s New Burlesque Theater. The original facility was a whites-only venue. When it was opened to African Americans in 1934, the name was changed to the Apollo.

A bay window is a window that projects outside, beyond the wall. The resulting space inside the wall forms a “bay” inside a room.

Bay rum is a distillate from rum and the leaves of the Indian bay tree that is used as a cologne or aftershave. Bay rum has been used since the 16th century, initially by sailors in the West Indies who found that it masked the natural “scent” they exuded after months at sea. Initially it was just the dry leaves that was used on the skin, and then the leaves were soaked in rum to extract the essential oils.

Gulls are a family of seabirds that is most closely related to terns. Some species of gull can be quite clever. For example, they can reportedly use pieces of bread as a bait to catch goldfish in ponds. Others can be quite fearless, and have been known to land on the backs of whale and peck out pieces of flesh.

The Greek letter “chi” is the one that looks like our letter X.

To weasel out of something is to back away from a prior commitment. The association of weasels with the concept of not being trusted might have arisen from the behavior in which a weasel sucks out the contents of an egg while leaving the shell virtually intact.

Inn the vernacular, “dis” (this) and “dat” (that) might be described collectively as “dose” (those).

Future president George W. Bush declared his bid for the governorship of Texas in 1994, at the same that his brother Jeb Bush started his first campaign to become governor of Florida. George W. won his race, whereas Jeb had to wait another four years.

Oilpaper is paper that has been treated with oil so that it is translucent and waterproof.

In Germany, there are thirteen regions that are officially defined as producers of “quality wines”. The best known of these regions is Mosel, which takes its name from the Moselle River. Mosel is the most prestigious region, but only the third largest in terms of production. And most of that production comes from the Riesling grape.

“Lady Marmalade” is a song that was most famously recorded by Labelle in 1975. A 2001 cover version by Christina Aguilera, Lil’ Kim, Mya and Pink was also very successful, released from the soundtrack of the film “Moulin Rouge!”. The song is noted for its suggestive chorus “Voulez-vous coucher avec moi ce soir?”, which translates from French as “Do you want to sleep with me tonight?”

Darth Vader is (to me) the most colorful antagonist in the “Star Wars” universe. Born as Anakin Skywalker, he was corrupted by the Emperor Palpatine, and turned to “the Dark Side”. IN the original films, Darth Vader was portrayed by English bodybuilder David Prowse, and voiced by actor James Earl Jones. Jones asked that he go uncredited for the first two “Star Wars” films, feeling that his contributions were insufficient to warrant recognition. I disagree …

10. Lesser component of “The Legend of Zelda,” say : MINIGAME

“The Legend of Zelda” is a video game. Apparently, it’s very successful …

19. “Let every heart prepare him room” song : JOY TO THE WORLD

“Joy to the World” is a very popular Christmas carol that dates back to the early 1700s. The hymn’s lyrics were written by Isaac Watts and are based on lines in the Bible’s Book of Psalms and Book of Genesis. The music for the version that we hear most often today was composed by Lowell Mason in the mid-1800s.

21. Greek goddess of the harvest : DEMETER

In Greek mythology, Demeter is the goddess of the harvest. Her Roman equivalent is Ceres.

“Mata Hari” is a 1931 film starring Greta Garbo in the title role. “Mata Hari” was a huge hit for MGM, and for Garbo. It is usually given the credit for popularizing the legendary stories surrounding the exotic dancer and WWI spy.

35. Tribe that sold horses to Lewis and Clark : SHOSHONE

One of the more celebrated Shoshone people was Sacagawea, the woman who traveled thousands of miles with the Lewis and Clark Expedition, serving as a guide and interpreter.

Alexei Kosygin was leader of the Soviet Union after Nikita Khrushchev. He served during the Cold War from 1964 to 1980. Kosygin resigned from office in October of 1980, and was succeeded by Nikolai Tikhonov. Kosygin’s retirement was prompted by poor health, and indeed, he passed away just two months after stepping down.

Wet nap is a term commonly used for a “wet wipe”, a manufactured paper tissues that comes pre-moistened. They are often provided after a meal at some restaurants after a finger-food dish, or perhaps as a refresher on an airplane. I think the “nap” is short of “napkin”, and that “Wet-Nap” is a brand name.