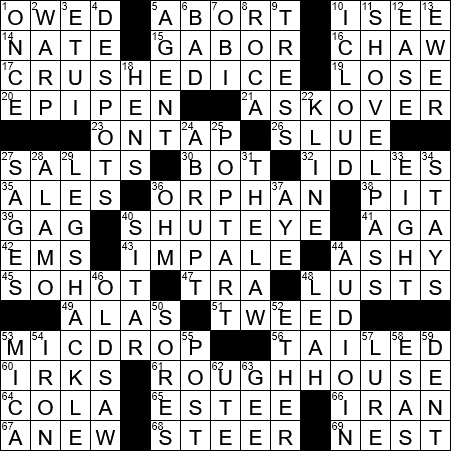 Themed answers each include a ROUGH style of HOUSE as a hidden word:

The “Nate the Great” series of children’s novels was written (mainly) by Marjorie Sharmat. Nate is like a young Sherlock Holmes, with a dog for a sidekick called Sludge. Some of the books have been adapted for television.

To slue (also “slew) is to turn sharply, or to rotate on an axis.

The first use of a national emergency phone number was in the UK in 1937, where the number 999 was introduced to call emergency services. If you need emergency services in the UK or Ireland to this day, you have to dial 999. It’s not really clear why 911 became the emergency number in the US. The most credible suggestion (to me) is that when it was introduced by the FCC in 1967, it was a number that “fit” with the numbers already used by AT&T for free services (211-long distance; 411-information; 611-repair service).

A blazer is a less formal version of a suit jacket, usually one with a less formal cut and often metal buttons. The original “blazer” was a red jacket worn by members of the rowing club at a Cambridge university in England. The “blazer” is so called because the Cambridge version was “blazing red” in color.

iCloud is an Apple service that features cloud storage and cloud computing.

The actor Kevin Kline stars in many of my favorite films, like “French Kiss” (in which he had a very impressive French accent) and “A Fish Called Wanda.” Kline also appeared in the romantic comedy “In & Out”, another favorite. “In & Out” is perhaps best remembered for its dramatic “interaction” between Kevin Kline and Tom Selleck … if you haven’t seen it yet, I won’t spoil it for you by saying any more!

“French Kiss” is a 1995 romantic comedy starring Meg Ryan and Kevin Kline. Ryan plays a woman who has a cheating fiancé, and Kline plays a crook whom she meets on a flight to Paris. I liked this one …

The third largest car rental company in recent years is Alamo, which was founded in 1974. Alamo made inroads (pun!) into the market by popularizing the idea of “unlimited mileage”.

The Magic 8 Ball is a toy, and supposedly a fortune-telling device, introduced by Mattel in 1946. There are 20 answers that the Magic 8 Ball can provide, including: