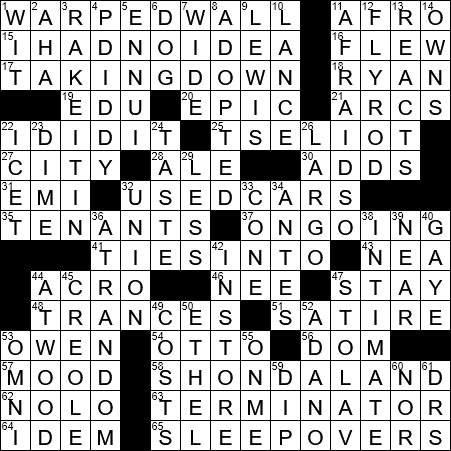 “American Ninja Warrior” is an entertaining, televised sports competition that is a spinoff of the very popular Japanese show “Sasuke”. Competitors have to navigate their way through a series of very challenging obstacles, in the fastest time possible.

The Jackson 5 singing group was originally made up of brothers Tito, Jackie, Jermaine, Marlon and Michael. The four eldest brothers are still performing, but now using the name “The Jacksons”.

Paul Ryan was a nominee for Vice President in the 2012 election, and was on the Republican ticket with Mitt Romney. Ryan was elected as Speaker of the House of Representatives in 2015 after John Boehner resigned. At 45, Ryan then became the youngest Speaker since 1875.
Mitt Romney was born Willard Mitt Romney in 1947 in Detroit, Michigan. Romney’s parents named him after J. Willard Marriott (the hotel magnate) who was the father’s best friend, and after Milton “Mitt” Romney who was the father’s cousin and quarterback for the Chicago Bears.

19. Letters of address for Washington and Lee? : EDU

After leading the Confederate Army of Northern Virginia during the Civil War, Robert E. Lee served as president of Washington College in Lexington, Virginia. The college’s name was changed to Washington and Lee University in 1870, soon after Lee’s death.

T. S. Eliot was awarded the Nobel Prize in Literature in 1948, largely due to his “Four Quartets”, a set of four poems that Eliot himself considered to be his life’s masterpiece. He also won a Tony Award in 1950 for Best Play, for “The Cocktail Party”, as well as two posthumous Tony Awards in 1983 for his poems that are used in the musical “Cats”.

Norman, Oklahoma is located just a few miles south of Oklahoma City. The city was named for Abner Norman from Kentucky, who first surveyed the area for the federal government. Norman is the third-largest city in the state, and is home to the University of Oklahoma that was founded there in 1890.
Eugene is the second-largest city in Oregon (after Portland). The city is named for its founder, Eugene Franklin Skinner. Skinner arrived in the area in 1846, after which the settlement he established was called Skinner’s Mudhole. The name was changed to Eugene City in 1852, which was shortened to Eugene in 1889.

Lexington Brewing and Distilling Company in Lexington, Kentucky opened for business in 1999. The company started out as a brewery, and introduced its Kentucky Ale in 2000. The distillery operation started in 2008, and Town Branch bourbon was released for sale in 2012 after four years of aging.

“The Onion” is a satirical news network, with a print newspaper and a heavy online presence. “The Onion” newspaper was founded by two college students at the University of Wisconsin-Madison in 1988. The founders sold the operation a year later for about $20,000. The paper grew steadily until 1996 when it began to publish online and really took off. I think it’s worth a tad more than $20,000 today …

Miranda Otto is an actress from Brisbane, Australia. Otto played Éowyn in “The Lord of the Rings” series of films.
“24: Legacy” is a spin-off of the incredibly successful TV show “24” that starred Kiefer Sutherland as counter-terrorist agent Jack Bauer. “24: Legacy” never really resonated with audiences and was cancelled after one series. However, there is still talk of somehow resurrecting the “24” franchise.

The honorific “Dom” is used in English for monks of certain orders, such as Benedictines and Carthusians. The term isa shortened form of the Latin “dominus” meaning “master, owner”.

Shonda Rhimes is the creator and head writer of the TV shows “Grey’s Anatomy” and “Scandal”. She also serves as executive producer for the crime shows “How to Get Away with Murder” and “The Catch”. Rhimes also runs her own production company called Shondaland.

The 1984 movie “The Terminator” was directed by James Cameron. It was a relatively low-budget production, costing $6.4 million. It has grossed around $80 million to date, so no wonder the Terminator said “I’ll be back”.

“Idem” is usually abbreviated as “id.” and is the Latin word for “the same”. In research papers, “idem” is used in a list of references, in place of citations “already mentioned above”.

When Sean John Combs started his rapping career, he used the stage name “Puff Daddy”. Then he went with “P. Diddy”, and I think that he is now recording simply as “Diddy”. Having said that, he has to stick with “P. Diddy” in some countries as he lost a legal battle over use of the simpler “Diddy” name as there is another artist called Richard “Diddy” Dearlove.

“Ennui” is the French word for boredom, a word that we now use in English. It’s one of the few French words we’ve imported that we haven’t anglicized and actually pronounce “correctly”.
Languor, lassitude, lethargy and listlessness are such lovely words. All are L-words meaning a lack of physical energy.

Meriwether Lewis and William Clark were soldiers in the US Army. Lewis was a personal aide to President Thomas Jefferson, even residing in the Presidential Mansion. This exposure contributed to his selection as leader of the famous “Lewis and Clark Expedition”, which was known at the time as the Corps of Discovery Expedition. William Clark was actually Lewis’s boss for a while before Clark retired. Lewis asked Clark to come out of retirement to accompany him on his three-year exploration.

23. It has a torch and two branches on its back : DIME

Key Largo is an island in the Florida Keys. The island gained a lot of celebrity in 1948 when the John Huston movie “Key Largo” was released, starring Humphrey Bogart, Edward G. Robinson and Lauren Bacall.

“Got to Give It Up” is a 1977 single recorded by Marvin Gaye. He had to be talked into recording the song, as it’s really a disco number, which wasn’t Gaye’s “scene”. But, he needed the money after a litigious divorce and lawsuits filed by former bandmates.

Margaret Atwood’s 1996 novel “Alias Grace” is a fictionalized account of a real killing that took place in 1843 in Canada. In both novel and reality, two servants were convicted of the murder of their employer and his housekeeper. Atwood’s telling of the story explores the politics of the Irish in a British colony, and the status of women in society.

In the US, the term “Creole” is most usually a reference to the people descended from the colonial French and colonial Spanish people who settled in the Louisiana region before it became part of the United States with the Louisiana Purchase of 1803.
The city of New Orleans, Louisiana has the nickname “The Big Easy”. This name might come from the early 1900s when musicians found it relatively “easy” to find work there. The city is also known by the acronym NOLA, standing for New Orleans (NO), LA.

Ethel Waters was a singer and actress. Waters was the second African American to be nominated for an Academy Award (after Hattie McDaniel, for “Gone With the Wind”). Waters received the nomination as Best Supporting Actress in 1949 for her performance in the film “Pinky”, in which she played the title character’s grandmother.

“A Bell for Adano” is a novel written by John Hersey. Hersey’s story is about an Italian-American US Army officer, Major Joppolo, who found a replacement for a town’s bell stolen by fascists. “A Bell for Adano” was made into a film in 1945, the same year the novel won a Pulitzer.

Dr Pepper was introduced in 1885 in Waco, Texas, one year before the competing Coca-Cola was released to the market. I spent an entertaining few hours at the Dr Pepper Museum in Waco a few years ago.