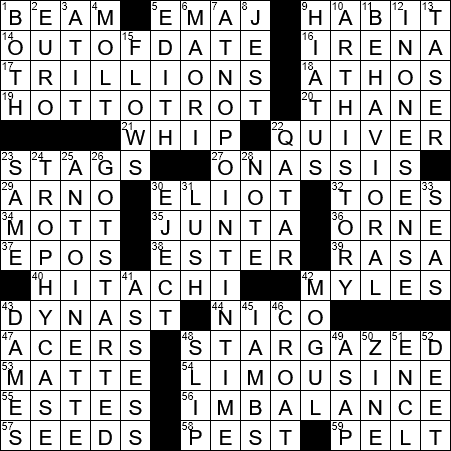 Chopin’s “Étude Op. 10, No. 3” is a popular piece of solo piano music. The main melody used was the composer’s most beautiful, and that’s according to Chopin himself.

The Faerie Queene is an epic poem by Edmund Spenser. It is one of the longest poems written in the English language.

Historically speaking, increases in the US national debt expressed as a percentage of the gross domestic product are really dependent on only two major factors: either war or recession. So, we should just avoid both of those things …

Thanes were Scottish aristocrats. The most famous thanes have to be the Shakespearean characters Macbeth (the Thane of Glamis, later Thane of Cawdor, and still later King of Scotland) and MacDuff (the Thane of Fife). Other thanes in “Macbeth” are Ross, Lennox and Angus, as well as Menteith and Caithness.

27 Aristotle in the 20th century : ONASSIS

Aristotle “Ari” Onassis was born to a successful Greek shipping entrepreneur in Smyrna in modern-day Turkey. However, his family lost its fortune during WWI and so Aristotle worked with his father to build up a new business empire centered on the importation of tobacco. In 1957, Aristotle founded the Greek national airline, what is today called Olympic Air, and he also got into the business of shipping oil around the world. He married Athina Livanos in 1946, the daughter of a wealthy shipping magnate. They couple had two children together, with one being the famous Christina Onassis. Livanos divorced Onassis on discovering him in bed with the opera singer Maria Callas. Onassis ended his affair with Callas in order to marry Jackie Kennedy in 1968.

“George Eliot” was the pen name of English novelist Mary Anne Evans. As one might think, Evans chose a male pen name in order that her work might be best appreciated in the Victorian era. Eliot wrote seven novels including “Adam Bede” (1859), “The Mill on the Floss” (1860), “Silas Marner” (1861) and “Middlemarch” (1871-72).

John Mott was an evangelist and activist who led for many years the Young Men’s Christian Association (YMCA) and the World Student Christian Federation (WSCF). His work was recognized with a Nobel Peace Prize in 1946.

The Normans were the people who gave their name to Normandy in the north of France. They were descended from Viking stock, so the name “Norman” derives from a translation of “North Men”.

“Epos” is a Greek word meaning “story poem”. We have absorbed the term into English with the same meaning. We also use “epos” in English to mean “epic”, i.e. a long narrative poetic work featuring heroic deeds and ventures.

“Tabula rasa” (plural “tabulae rasae”) is the idea that people are born with a “blank slate”, and that knowledge comes from experience and perception.

Hitachi is a huge Japanese company that operates in many different sectors of the market. It was founded in 1910 by an electrical engineer named Namihei Odaira, with the first production being an induction motor used in copper mining. The name “Hitachi” comes from the kanji characters “hi” meaning “sun” and “tachi” meaning rise.

Alannah Myles is a singer-songwriter from Toronto. Her first big hit was “Black Velvet” released in 1989.

Nico was the stage name of the German singer born Christa Päffgen. Nico was one of Andy Warhol’s superstars, a group of personalities that gathered around him and whom he promoted in the sixties and seventies. It was Warhol who introduced Nico to the Velvet Underground, the New York City band that Warhol was managing at the time.

That would be tennis, perhaps.

54 It may be a stretch : LIMOUSINE

“Nudnik” is a slang term describing a boring and bothersome person. The word comes from Yiddish, with “nuda” being the Polish for “boredom”.

A hiatus is a break or opening in a material object. “Hiatus” is Latin for “opening”.

10 Subject including the Renaissance : ART HISTORY

The Renaissance is the period in European history that bridges the Dark Ages and the Modern Era. “Renaissance” is French for “rebirth”, and is a term reflecting the rebirth of interest in the learnings from Ancient Greece and Ancient Rome.

There is no evidence that Marie Antoinette ever uttered the words “Let them eat cake”. The phrase was attributed to “a great princess” though, by the philosopher Jean-Jacques Rousseau. Rousseau wrote in his autobiography:

Finally I recalled the stopgap solution of a great princess who was told that the peasants had no bread, and who responded: “Let them eat brioche (cake).”

The Moon’s Mare Tranquillitatis (Latin for “Sea of Tranquility”) was named in 1651 by astronomers Francesco Grimaldi and Giovanni Battista Riccioli. Famously, the first manned landing on the Moon was in the Sea of Tranquility, when the Apollo 11 Lunar Module named Eagle touched down there in 1969. However, the first man-made vehicle to reach the Sea of Tranquility arrive four years earlier. the Ranger 8 spacecraft was deliberately crashed there in 1965, sending back thousands of photographs to Earth in the last 23 minutes of its mission.

The Moon’s Mare Serenitatis (Latin for “Sea of Serenity”) connects with the more famous Mare Tranquillitatis (Latin for “Sea of Tranquility”), which is where Neil Armstrong took those first steps on the Moon. Mare Serenitatis, like most of the “seas” on the Moon, was named in 1651 by Italian astronomer Giovanni Battista Riccioli. Anyone who likes looking at “the Man in the Moon” might be interested to know that the Sea of Serenity forms the right eye.

“DEET” is short for N,N-Diethyl-meta-toluamide, an active ingredient in insect repellents. DEET is most often used to repel mosquitoes by applying it to the skin and/or clothing. It is also used to protect against tick bites.