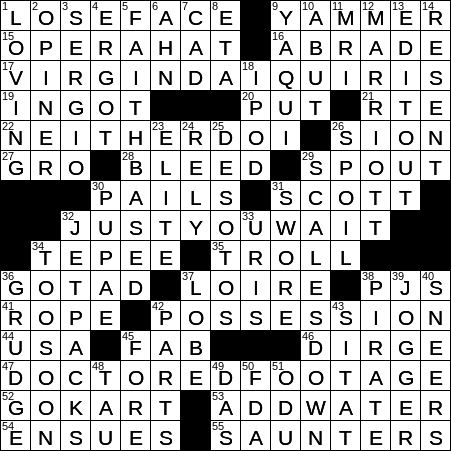 Constructed by: Samuel A. Donaldson
Edited by: Rich Norris

That would be street cred(it).

In most theaters and stadia today, “loge” is the name given to the front rows of a mezzanine level. Loge can also be used for box seating.

Daiquirí is a small village on the coast near Santiago, Cuba and a key location in the American invasion of Cuba during the Spanish-American War. Supposedly, the cocktail called a “Daiquiri” was invented by American mining engineers in a bar in nearby Santiago.

“Put option” is the name given to a contract in which the buyer of the put has the option to sell something at a future date should it’s market price fall to a predetermined level. The seller of the put is obliged to purchase the security at that price.

In the preface of Dan Brown’s novel “The Da Vinci Code”, the Priory of Sion is presented as a secret society that does in fact exist. However, there is a lot of evidence that the priory was an invention, and created in forged documents in the sixties. Regardless, Dan Brown’s book is a really enjoyable read, in my humble opinion …

Scotts Miracle-Gro Company was founded in 1868 by one Orlando Scott, and initially dols seed to the agricultural industry. In the early 1900s, Scotts started to sell to homeowners, and mainly supplied lawn seed. The company merged with the gardening company Miracle-Gro in 1955.

No one seems to know for sure who the Scott is in the exclamation “great Scott!”. One theory is that the reference is to the commander-in-chief of the US Army during the Civil War, General Winfield Scott. Scott weighed in at 300 pounds later in his life, and was so obese that he could not ride a horse.

The Loire is the longest river in France. It is so long that it drains one-fifth of the nation’s land mass. The Loire rises in the southeast, in the Cevennes mountain range, then heads north then due west, emptying into the Bay of Biscay at the city of Nantes. The Loire Valley is home to some of France’s most famous wine production, and includes the wine regions of Sancerre, Pouilly-Fumé and Muscadet.

“WWE Raw” is a professional wrestling TV show. Not my cup of java …

Sergio Aragonés is a Spanish-Mexican cartoonist who is best known for his contributions to “Mad” magazine. One of Aragonés’ creations is the regular section in the magazine titled “A Mad Look At …”

A curriculum (plural “curricula”) is a set of courses offered by a teaching establishment. “Curriculum” is Latin for “running, course”, and comes from “currere” meaning “to run”.

The actor Philip Ahn is perhaps best known for playing Master Kahn, one of Caine’s teachers on the television show “Kung Fu”. Ahn was the first Asian-American actor to receive a star on the Hollywood Walk of Fame.

American Airlines was founded in 1930 through the acquisition of 82 existing small airlines, and initially operated as American Airways. The company name was changed to “American Air Lines” in 1934. Back then, airlines made their profits by carrying the US mail, and American became the first airline to turn a profit on a route that could solely carry passengers. It did so by working with Donald Douglas to develop the DC-3 passenger plane. At that time, American started calling its aircraft “Flagships” and introduced its more wealthy passengers to the first Admirals Club.

The Yaqui are an ethnic group who live mainly in the Southwestern US and the Mexican state of Sonora. The Spanish first encountered the Yaqui in 1533. There followed an almost continual struggle by the Yaqui to defend their lands and culture for four centuries.

Marriott Hotels developed their initial properties in the fifties. The first to open was the Quality Inn near Washington DC, which was the first purpose-built airport hotel in the country.

The jet pack was originally restricted to the world of science fiction, the concept having been introduced in the 1920s. In the 1960s the jet pack became a reality, with people flying through the air, particularly in movies. And, there followed soon after jet packs used by astronauts in space.

PNC Park is the home to the Pittsburgh Pirates baseball team. The park is sponsored by PNC Financial Services, the sixth largest bank in the US, and one founded and based in Pittsburgh.