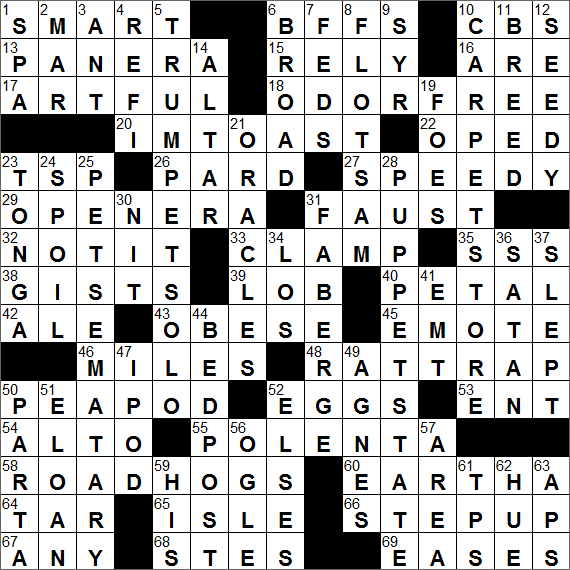 Today’s themed answers are all written in the down-direction, with each containing a hidden word. That word is “PETS”, which is actually the word “STEP” written “UP”.

“2 Broke Girls” is a sitcom about two penniless young ladies sharing an apartment in Brooklyn, with one of the pair born poor, and one born rich but now poor. The “two broke girls” wait tables in a restaurant, while dreaming about opening their own cupcake business. The title characters are played by Kat Dennings and Beth Behrs.

Panera Bread is a chain of bakery/coffeehouses. It’s a good place to get online while having a cup of coffee. Back in 2006 and 2007, Panera was the largest provider of free Wi-Fi access in the whole of the US.

In the Christian tradition, the Beatitudes are a collection of moral teachings laid out by Jesus in the Sermon on the Mount, according to the Gospel of Matthew. The eight Beatitudes are:

“Cowpoke” is a term used nowadays for any cowboy, but it was originally limited to the cowboys who prodded cattle onto railroad cars using long poles.

The Flash is a DC Comics superhero who is nicknamed “the Scarlet Speedster” or “the Crimson Comet”. The Flash’s superpower is his ability to move extremely quickly, with speed that defies the laws of physics.

In the sport of tennis, the Grand Slam tournaments were opened up to professional players, and not just amateurs, in 1968. So, the period since 1968 has been called “The Open Era”.

Faust is a character from a classic German legend who makes a pact with the devil. He agrees to exchange his soul for worldly gratification and unlimited knowledge.

A fryolator is a deep fat fryer, a kitchen appliance.

Polenta is a porridge made from finely ground corn. The term “polenta” is Italian.

Eartha Kitt really did have a unique voice and singing style. Her rendition of “Santa Baby” has to be one of the most distinctive and memorable recordings in the popular repertoire. Some of you will no doubt remember Eartha playing Catwoman on the final series of the TV show “Batman”.

A Jack Tar, or just “tar”, was a seaman in the days of the British Empire. The term probably arose due to a sailor’s various uses of tar back then, including waterproofing his clothes and using tar in his hair to slick down his ponytail.

Flotsam and jetsam are both terms used to describe “garbage” in the ocean. Flotsam is floating wreckage from a ship or its cargo. Jetsam is similar to flotsam, except that it is part of a ship or cargo that is deliberately cast overboard, perhaps to lighten a vessel.

The toy group of dogs is made up of the smallest breeds. The smallest toy breeds are sometimes also called “teacup” breeds.

The Kingdom of Tonga is made up of 176 islands in the South Pacific, 52 of which are inhabited and scattered over an area of 270,000 square miles. Tonga was given the name Friendly Islands in 1773 when Captain James Cook first landed there, a reference to the warm reception given to the visitors.

“Pet Sematary” is a horror novel by Stephen King, first published in 1983. King was inspired to write the story after his experiences in a rented house on a busy road. Lots of animals were killed on the road so local children created a pet cemetery in a nearby field.

Los Lobos are an American Chicano rock band, who released their first LP in 1978 and are still going strong today. The band’s name “Los Lobos” translates from Spanish as “The Wolves”.

MP3 is an audio coding format, the most common format used for music stored on digital audio players. MP3 files are compressed and “lossy”, meaning that some audio information is lost when the file is generated. For this reason, MP3 files are about 1/11 of the size of the equivalent music files found CD.

Anne was the youngest of the three sisters in the literary Brontë family. Her older sisters wrote novels that are more recognized, but Anne’s two novels do have a following. “Agnes Grey” is based on her own experiences working as a governess. Her other novel, “The Tenant of Wildfell Hall”, is written as a long letter from a young man describing the events leading up to his first meeting with his wife-to-be. Anne Brontë’s writing career was cut short in 1849, when she died of pulmonary tuberculosis, at only 29 years of age.

“HIS” towel usually hangs beside the towel marked “HERS”.

61…Pulls a yard prank on, briefly..TPS

43…More than a little plump..OBESE

45…Put a little extra into the part..EMOTE

10…Stop on a redecorating spree..CARPET STORE

31…With 52-Across, jeweled creations made for Russian czars..FABERGE …

61…Pulls a yard prank on, briefly..TPS