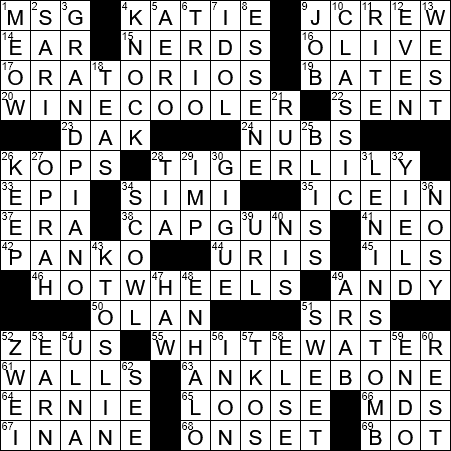 Bates Motel and house were constructed on the backlot of Universal Studios for the 1960 HItchcock movie “Psycho”. They are still standing, and for me are highlights of the backlot tour that is available to visitors.

A wine cooler is a drink made from wine and fruit juice, and often some soda.

Dak Prescott was drafted by the Dallas Cowboys in the 2016 draft as a backup quarterback for starting QB Tony Romo. The Cowboys needed Prescott as backup immediately, when Romo got injured before the first game of the season.

The Keystone Cops (sometimes “Keystone Kops”) were a band of madcap policemen characters who appeared in silent movies. A 1914 short film called “A Thief Catcher” that was believed lost was rediscovered in 2010. “A Thief Catcher” featured the magnificent Charlie Chaplin in an early role as a Keystone Cop.

“Tiger Lily” is a common name applied to several species of lily that have orange flowers with black accents.

“Panko” is a breadcrumb used in some Japanese cuisine, primarily as a crunchy coating for fried foods.

The Hot Wheels brand of toy car was introduced by Mattel in 1968. Hot Wheels models are all die-cast, with many designs coming from blueprints provided by the manufacturers of the full-size car.

One might find a registered nurse (RN) and a medical doctor (MD) in an emergency room (ER).

“Cockamamy” (sometimes “cockamamie”) is a slang term meaning “ridiculous, incredible”. The term goes back at least to 1946, but may have originated as an informal term used by children in New York City in the 1920s.

The Essenes were a Jewish religious group who are most noted these days perhaps as the authors of the Dead Sea Scrolls.

Baptism is a rite admitting a candidate, often an infant, into many Christian Churches. The ceremony usually uses water as a sign of purification. Water may be poured on the head, or the candidate may be totally immersed in water.

There is an Olympic Games held every two years, alternating between a Winter and Summer Games.

A gigue is a dance from the baroque era. Popular in France, the dance was derived from the British jig.

Lenin’s Tomb is a mausoleum in which lie the embalmed remains of Vladimir Lenin. The tomb lies just outside the walls of the Kremlin in Red Square. Lenin died in 1924, after which his body was housed in a wooden structure in Red Square for viewing by mourners. The current marble and granite structure was completed in 1930. The body has rested there on display ever since, except for the years of WWII when there was a perceived danger of Moscow falling to the Germans. The body was evacuated to Tyumen in Siberia for the war years.

Singer K. T. Oslin is best known for her string of country hits in the eighties.

48 Surround, as with a saintly glow : ENHALO