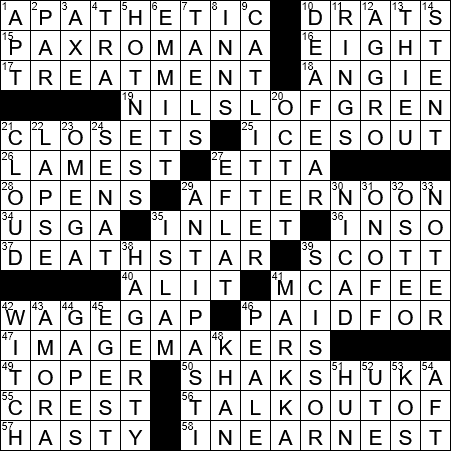 15 Period that ended with the death of Marcus Aurelius : PAX ROMANA

“Pax Romana” is Latin for “Roman Peace”. The term described a period in Roman history for the 1st and 2nd centuries AD during which the Roman Empire was ruled by Caesar Augustus. Under his control, expansionist ideas by powerful generals were held in check, and the peoples of foreign lands ruled by the Romans were relatively calm. The peace enjoyed was considered uneasy as Rome governed its conquered territories with an iron fist, and insurrection was likely at all times. The expression “pax Romana” then came to be used in English to describe any situation in which there is an uneasy peace, a peace imposed by a powerful state on a weaker state.

Marcus Aurelius was Emperor of Rome from 161 until his passing in 180. His death in 180 is generally regarded as the end of the “Pax Romana”, the long period of relative peace in the Roman Empire that started in 27 BCE. So, the death of Marcus Aurelius also marked the beginning of what came to be known as the Fall of the Roman Empire.

Etta Jones was a jazz singer who was sometimes known as the “jazz musician’s jazz singer”. Because she has a similar name to Etta James, Jones was often confused with the more famous singer. Jones never really had any huge commercial success though, despite the respect that she engendered within the inner sanctums of the jazz world.

The United States Golf Association (USGA) was formed in 1894. The need for a governing body for the sport became evident that year when both the Newport Country Club and the St. Andrew’s Golf Club in Yonkers, declared that the winner of a tournament at each of their courses was the “national amateur champion”. The first president of the USGA was Theodore Havemeyer, and to this day the one and only US Amateur Trophy bears his name.

A bight is a bend in a shoreline, or the body of water bounded by such a bend. A bight is therefore similar to a bay.

In the “Star Wars” universe, a Death Star is a huge space station that is the size of a moon. A Death Star is armed with a superlaser that can destroy entire planets.

Sir Walter Scott was a Scottish novelist and playwright, the first English-language author to gain popularity around the world during his own lifetime. The most famous of his works are “Ivanhoe”, “Rob Roy” and “The Lady of the Lake”.

“The Lady of the Lake” is an 1810 narrative poem by Scottish author Walter Scott. The poem includes the original lyrics of the song “Hail to the Chief”, which was to become the official Presidential Anthem of the US.

McAfee is a security software company now known as Intel Security Group. Purchased by Intel in 2011, the company was founded by John McAfee in 1987. John McAfee might be described as a “bit of a character”. He lived in Belize for several years, before being forced out of the country. After returning to the US, McAfee went after the Libertarian Party nomination for US president in the 2016 election.

Kaspersky Lab is a cybersecurity company based in Moscow that is perhaps best known for supplying antivirus software. Although popular in Europe, Kaspersky software is used far less over here in the US, largely because of claims by the US government of ties between Kaspersky and the Russian government.

To tope is to drink alcohol excessively and habitually.

Emmitt Smith is a retired football player who turned out for the Dallas Cowboys and the Arizona Cardinals. Smith was on three Super Bowl-winning teams with the Cowboys. Smith is also quite a dancer and won the “Dancing with the Stars” mirror ball trophy in 2006.

The Far Eastern measurement known as a tael is used to weigh out precious metals, as well as herbal medicines.

“Aggro” is a term that we use a lot in Ireland, and probably more so than in the UK. It can mean an “annoyance” (short for “aggravation”) but is more often used to mean “trouble”, as in someone caused trouble, created aggro.

Nguyen Van Thieu was president of South Vietnam from 1967 to 1975. He was also the last person to hold the office, as it was abolished following the reunification of the country at the end of the Vietnam War.

The long O in “Onassis” would be written as Ω (omega) in Greek.

Antipasto (plural “antipasti”) is the first course of a meal in Italy. “Antipasto” translates as “before the meal”.

A NiCad rechargeable battery is so called because the electrodes are made of nickel oxide hydroxide and metallic cadmium.

The 1980 movie “Airplane!” has to be one of the zaniest comedies ever made. The lead roles were Ted Striker (played by Robert Hays) and Elaine Dickinson (played by Julie Hagerty). But it was Leslie Nielsen who stole the show, playing Dr. Barry Rumack. That’s my own humble opinion of course …

The markka was the currency of Finland that was used until it was replaced by the euro in 2002. The markka was introduced by the Finns in 1860 to replace the Russian ruble.

Norman Vincent Peale was the author of the bestseller “The Power of Positive Thinking”. Peale was a Protestant preacher, and for decades was pastor of the Marble Collegiate Church in Manhattan in New York City. Peale also founded the nonprofit group that publishes “Guideposts” magazine.

The Battle of the Catalaunian Plains of 451 CE was fought between the Huns and a coalition of Romans and Visigoths. There are many aspects of the battle that are disputed today, including the conclusiveness of the outcome, and the location of the Catalaunian Plains. It is generally agreed that the battle took place in the northeast of modern France, near the city of Troyes. Whether or not the Huns emerged victorious on the day of the battle, it is clear that the Huns returned the following year to invade modern-day Italy and trigger the decline of the Western Roman Empire.

Muhammad Ali won 56 professional fights, 37 of which were knockouts. He lost 5 fights, 4 being decisions and one being a technical knockout (TKO). The TKO-loss was Ali’s second-to-last fight, against Larry Holmes. By the time Ali took on Holmes, he was already showing signs of Parkinson’s Syndrome, although the diagnosis would not come until four years later.

Blackbeard the pirate was given the slave ship called La Concorde de Nantes in 1717 by his boss, the pirate Benjamin Hornigold. Blackbeard renamed the vessel Queen Anne’s Revenge, possibly as a nod to Queen Anne, the last Stuart monarch. Blackbeard lost the vessel off the coast of North Carolina less than a year later. The wreck of the Queen Anne’s Revenge was discovered in shallow water in 1996 and is still undergoing excavation.