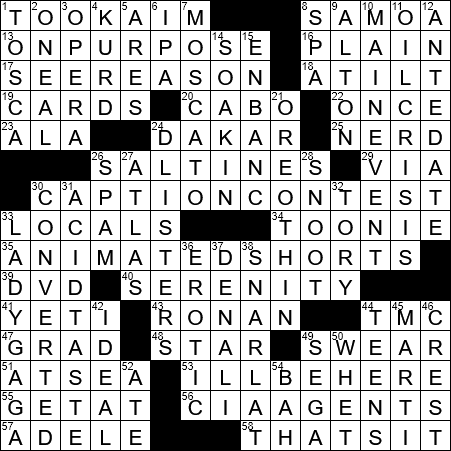 29 Word on Italian street signs : VIA

Ronan Farrow is a former US government advisor in the Obama administration who hosted “Ronan Farrow Daily” on MSNBC from 2014 to 1025. Farrow is the son of actress Mia Farrow and filmmaker Woody Allen. Ronan is estranged from his father, ever since Allen started a relationship with Mia Farrow’s adopted daughter Soon-Yi Previn, who is now Allen’s wife.

G. Gordon Liddy serving in various positions in the Nixon administration. In 1971, Liddy was moved into a unit tasked with managing leaks of information from the White House. As the group was working on “leaks”, it was known as the White House “Plumbers” unit. Over time, the Plumbers moved from plugging leaks to actively plotting to embarrass the Democratic opposition during President Nixon’s re-election campaign. Ultimately, Liddy led the group of five men who famously broke into the headquarters of the Democratic National Campaign in the Watergate Complex. Liddy was sentenced to a 20-year prison term, although he only served four and a half years following a commutation of his sentence by President Jimmy Carter. Years later, Liddy became quite successful as a nationally syndicated talk show host.

Adele Simpson was a fashion designer working out of New York for nearly five decades starting in the 1940s. As a child, Simpson was vaudeville performer who danced with several prominent entertainers of that era, including Milton Berle.

4 Member of an Iraqi minority : KURD

“Wonder Woman” is a 2017 film starring Gal Gadot as the superhero title character. It is listed by many as one of the best superhero movies of all time. Gadot had already played Wonder Woman, in the 2016 film “Batman v Superman”.

9 Brown on the Food Network : ALTON

The 1973 Oil Crisis started when the Arab members of OPEC imposed an oil embargo. The action was taken as retaliation for the decision by President Nixon to resupply the Israeli military during the Yom Kippur War.

15 With all judges present, as at a Circuit Court : EN BANC

“En banc” is a French term, translating as “on a bench”. It refers to the cases in which all the judges of a court hear a case, as opposed to a case heard just by a panel, a subset of the full complement. The phrase is sometimes written as “in banc” in the US.

“Tory” comes from the Irish word “tóraí” meaning “outlaw, robber”. The term “tory” was originally used for an Irish outlaw and later became a term of abuse for Irish rebels. At the end of the reign of King Charles II in Britain, there was a political divide with one side being called “Whigs” and the other “Tories”. Historically, the term “Tory” evolved to basically mean a supporter of the British monarchy, and indeed was used to describe those who remained loyal to the British Crown during the American Revolution. Today, “Tory” is used for a member of the British Conservative Party.

Anchorage, Alaska is the northernmost city in the US with over 100,000 residents (in fact, it has a population close to 300,000). Anchorage is also the state’s most populous city, and is home to more than 40% of Alaska’s residents.

José Martí was a Cuban writer and political activist who became a symbol for his country’s movement to gain independence from Spain in the 1800s, earning him the nickname “Apostle of Cuban Independence”. Martí was killed in action in a battle against Spanish troops in 1895.

The Dreamcast is a video game console released by Sega in the late nineties. It was to become the company’s last game console. Since then, Sega has focused on producing video games as opposed to hardware.