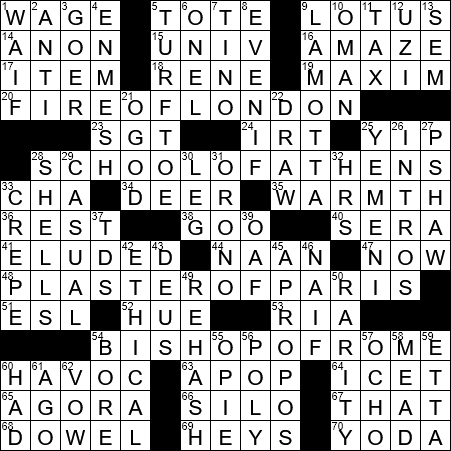 Themed answers today are phrases in the format “x of y”, where “y” is the name of a European capital city:

The Great Fire of London was a devastating blaze that swept through the center of the English capital for four days in 1666. The fire started at a bakery in Pudding Lane and eventually destroyed the homes of over 80% of the city’s inhabitants, 13,200 houses and 87 parish churches, as well as St. Paul’s Cathedral. After the fire died out, there was a rush to place blame, and a French watchmaker was tried and hanged for setting the blaze. However, it was later discovered that the Frenchman had only arrived in London two days after the fire started.

The famous and very beautiful St. Paul’s Cathedral in London was designed by Sir Christopher Wren. St. Paul’s was completed in 1708 and was constructed as part of a rebuilding program necessary after the devastation of the Great Fire of London of 1666. St. Paul’s is the second largest church building in the country, after Liverpool Cathedral.

“Sgt. Pepper’s Lonely Heart Club Band” was the alter-ego of the Beatles, and the title of a famous studio album released in 1967.

The Interborough Rapid Transit Company (IRT) was the original private operator of the New York Subway when it opened in 1904. The city took over ownership of the system in 1940, but the lines originally operated by the IRT are still known by the IRT moniker.

28. Raphael fresco depicting Greek philosophers, with “The” : SCHOOL OF ATHENS

“The School of Athens” is a painting by Raphael, one thought by many to be his masterpiece. The painting is a fresco, and can be seen in the Apostolic Palace in the Vatican.

The interjection “cha-ching!” is used to celebrate a windfall, lots of money. The term is imitative of the sound made by a mechanical cash register when ringing up a transaction. “Cha-ching!” was popularized by the 1992 movie “Wayne’s World”. It was also used around the same time in a TV spot for Rally’s hamburgers that featured a young Seth Green.

36. Seventh-day activity, in the Bible : REST

According to the Book of Genesis:

As Doris Day told us, “que sera sera” is Spanish for “whatever will be, will be”.

Plaster made using gypsum is commonly referred to as plaster of Paris. The original plaster of Paris came from a large deposit of gypsum mined at Montmartre in Paris, hence the name.

The Pope is the Bishop of Rome and the leader of the Roman Catholic Church. The term “pope” comes from the Latin “papa”, and ultimately from the Greek “pappas”, with both terms being a child’s word for “father”.

1. Many a Dickens child : WAIF

Turf toe is a sports injury associated with play on artificial turf or any other surface without much give. It is a sprain of the ligaments around one or more toe joints, particularly the big toe. The medical term for the injury is “metatarsophalangeal joint sprain”.

First baseman Tino Martinez has retired from Major League Baseball. Martinez played for a number of teams including the Mariners, Yankees, Cardinals and Devil Rays. Martinez was born and raised in Tampa, Florida and as a boy he worked in his father’s cigar factory.

Jake LaMotta is a retired Italian-American boxer and former world champion. Famously. LaMotta was played by Robert De Niro in the 1980 movie “Raging Bull”. LaMotta’s nickname is “The Bronx Bull” as well as “The Raging Bull”.

There might be a leg of a race at a sports meet.

“Apropos” comes into English directly from French, in which “à propos” means “to the purpose”. Note that we use the term as one word (apropos), but the original French is two words (à propos).