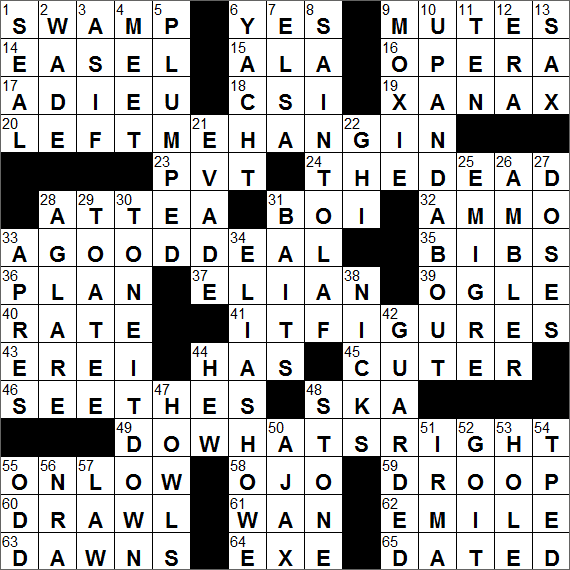 Theme: Left to Right, Up and Down

“Pogo” is a comic strip that was launched in 1948, the creation of cartoonist Walt Kelly. The story centers on animals that live in the Okefenokee Swamp on the Georgia-Florida border, with the title character “Pogo Possum” being an anthropomorphic opossum.

In French, “à la mode” simply means “fashionable”. In America, the term has also come to describe a way of serving pie, usually with ice cream, or as I recall from when I lived in Upstate New York, with cheese.

Richard Wagner was born in the Jewish quarter of Leipzig in 1813. Decades later, Wagner became known not only for writing magnificent music, but also for his anti-semitic views and writings.

“Chéri” is a form of familiar address in French, meaning “dear, … “Chéri” is the form used when talking to a male, and “chérie” to a female.

Xanax is a brand name of the antianxiety drug alprazolam. Xanax is one of the most commonly misused prescription drugs in the US, with wide acceptance in the illegal recreational drug market.

The Grateful Dead were a rock band from the San Francisco Bay Area that was founded in 1965. “The Dead” disbanded in 1995 following the death of lead guitarist Jerry Garcia. Grateful Dead fans (including my wife) refer to themselves as “Deadheads”.

The immigration status of young Cuban boy Elián González was all over the news in 2000. Elián’s mother drowned while trying to enter the US illegally, whereas Elián and his mother’s boyfriend survived the journey. The INS placed Elián in the care of paternal relatives in the US who then petitioned to have the boy stay with them permanently, against the wishes of Elián’s father back in Cuba. After court proceedings, the federal authorities forcibly removed Elián from his relatives in the US, and he was returned to his father who took him back to Cuba. Back in Cuba, Fidel Castro stepped in and befriended Elián, so he has influential sponsorship now in his homeland as a result of his ordeal. Elián has grown up, and earned himself a degree in industrial engineering in 2016.

We use the phrase “cute as a button” over here in North America. When I was growing up on the other side of the Atlantic, we said “bright as a button”. I believe both phrases have the same meaning.

The most famous work of French writer Émile Zola is his 1898 open letter “J’Accuse!” written to then French president Félix Faure. The letter was published on the front page of a leading Paris newspaper, and accused the government of anti-Semitism in its handling of the trial of Captain Alfred Dreyfus. Dreyfus was a Jewish military officer in the French army, falsely accused and convicted of spying for Germany. Even after the error was discovered, the government refused to back down and let Dreyfus rot away on Devil’s Island rather than admit to the mistake. It wasn’t until 1906, 12 years after the wrongful conviction, that Dreyfus was freed and reinstated, largely due to the advocacy of Emile Zola.

St. Olaf College in Northfield, Minnesota was named for the former king and patron saint of Norway, Olaf II.

The saxophone was invented by Belgian Adolphe Sax. Sax developed lip cancer at one point in his life, and one has to wonder if his affliction was related to his saxophone playing (I am sure not!). I had the privilege of visiting Sax’s grave in the Cemetery of Montmartre in Paris a few years ago.

Après-ski is a French term, meaning “after skiing”, and refers to the good times to be had after coming off the slopes.

Rosetta is a coastal city and port on the Mediterranean coast of Egypt. The Rosetta Stone is an Ancient Egyptian artifact of tremendous importance in deciphering Egyptian hieroglyphics. Carvings on the stone are actually three translations of the same passage of prose, one in Egyptian hieroglyphics, one in Egyptian Demotic language, and one in classical Greek. The stone was discovered by the French military during Napoleon’s 1798 campaign in Egypt. Before the French could get it back to France, the stone somehow ended up in enemy hands (the British), so it is now on display in the British Museum. Ownership of the stone is very much in dispute. The French want it, and understandably, the Egyptians would like it back.

Irma Rombauer was the author of the famous cookbook “The Joy Of Cooking”. Rombauer self-published the book back in 1931 in St. Louis, Missouri. She and her family continued to publish privately as demand was high, and then a commercial printing house picked it up in 1936. “The Joy of Cooking” has been in print continuously ever since.

The National Restaurant Association is a powerful lobbying organization in Washington, DC that is sometimes referred to as “the other NRA”, to distinguish it from the National Rifle Association. One focus of “the other NRA” is to hold down labor costs by resisting efforts to raise the minimum wage. The organization has been effective in holding down the federal minimum wage for tipped employees to $2.13 per hour, a rate that has been in effect since 1991.

28…Socializing with the queen, maybe..AT TEA

35…Accessories for the highchair set..BIBS

22…Phone button letters next to a 4..GHI

42…Covered, as in a man-to-man defense..GUARDED