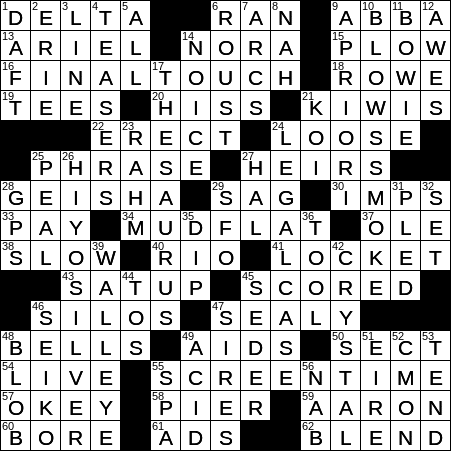 Themed answers each end with a type of SCREEN:

A river delta is a triangular landform at the mouth of a river created by the deposition of sediment. The Nile Delta in Northern Egypt is one of the world’s largest river deltas, and covers 150 miles of coastline on the Mediterranean. The most famous “delta” in the United States isn’t actually a delta at all. The Mississippi Delta is an alluvial plain that lies 300 miles north of the river’s actual delta, yet it is known as the “Mississippi River Delta”. Very confusing …

Mike Rowe is host of the successful reality show called “Dirty Jobs” that is broadcast by “Discovery Channel”. Rowe is also a spokesperson for Ford Motor Company in a series of television commercials. He is quite the singer too, and he sang professionally with the Baltimore Opera for a while.

“To pony up” means “to pay”. Apparently, the term originated as slang use of the Latin term “legem pone” that was once used for “money”. “Legem Pone” was the title of the Psalm that was read out on March 25 each year, and March 25 was the first payday of the year in days gone by.

9 Presupposed by experience : A PRIORI

The first person to use the term “thesaurus” to mean a “collection of words arranged according to sense” was Roget in 1852, when he used it for the title of his most famous work. Up to that point in time, a thesaurus was basically an encyclopedia. Before being used with reference to books, a thesaurus was a storehouse or treasury, coming from the Latin “thesaurus” meaning “treasury, treasure”.

Walleye is a freshwater fish that is native to Canada and the northern US. The walleye takes its name from its distinctive eyes. The eyes reflect light, rather like those of a cat, creating a phenomenon of “eyeshine”. The walleye’s eyes are well adapted for hunting for food in turbid waters, but makes them a more visible prey to anglers that hunt for them at nighttime. The walleye is the state fish of Minnesota and South Dakota, and the state warm water fish of Vermont.

County Kerry is located in the southwest of Ireland. It is a popular tourist destination, largely because it is home to the town of Killarney. Killarney is a jumping off point for the famous Ring of Kerry and the Lakes of Killarney. Kerry’s county town is Tralee, home to the world-famous Rose of Tralee festival.