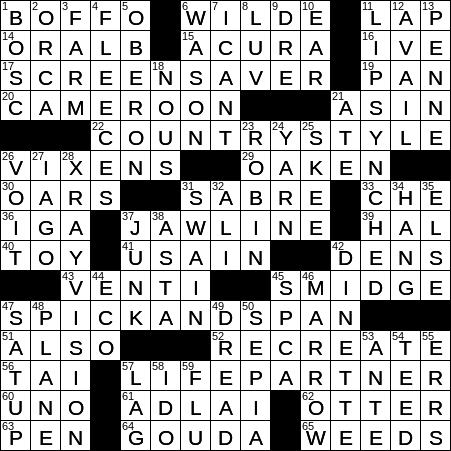 Themed answers end with a word that often follows, PARTNERS with, “LIFE”:

“Boffo” is show biz slang for “very successful”, and is a term that dates back to the early sixties.

“The Picture of Dorian Gray” is a novel by Oscar Wilde, in fact Wilde’s only novel. In the story, the title character is a young man appearing in a painting. Jokingly, Dorian sells his soul to the devil so that the painting would age rather than him.

The Buffalo Sabres joined the National Hockey League in the 1970-71 season. The team took the name “Sabres” following a fan contest.

Michael Che is a standup comedian from New York City. Che had worked as a writer for “Saturday Night Live” (SNL), and then started to appear in front of SNL cameras in September 1914. One of his roles was co-anchor for the “Weekend Update” segment of the show.

“IGA” stands for “Independent Grocers Alliance”, which is a chain of supermarkets that extends right around the world. IGA’s headquarters is in Chicago. The company uses the slogan “Hometown Proud Supermarkets”.

Something described as spick-and-span is either brand new or spotlessly clean. Our contemporary adjective was written as “spick-and-span-new” in the 16th century. The latter term could be rewritten as “new as recently made spike (nail) and chip (of wood)”.

Adlai Stevenson (AES) ran for president unsuccessfully against Dwight D. Eisenhower (DDE) in 1952 and again in 1956. Some years after his second defeat, Stevenson served under President Kennedy (JFK) as Ambassador to the United Nations. Stevenson was always noted for his eloquence and he had a famous exchange in a UN Security Council meeting during the Cuban missile crisis. Stevenson bluntly demanded that the Soviet representative on the council tell the world if the USSR was installing nuclear weapons in Cuba. His words were “Don’t wait for the translation, answer ‘yes’ or ‘no’!” followed by “I am prepared to wait for my answer until Hell freezes over!”

Bosc is a cultivar of the European pear grown in the northwest of the United States. The Bosc is that pear with a skin the color of a potato, with a long neck. I always seem to use the potato as my point of reference. How Irish am I …?

Skee-Ball is that arcade game where you roll balls up a ramp trying to “bounce” it into rings for varying numbers of points. The game was first introduced in Philadelphia, in 1909.

Voit is a sporting goods company that was founded by William J. Voit in 1922. Voit invented the first all-rubber inflatable ball, in the late twenties.

Although Superman’s ability to see through objects is termed “x-ray vision”, the phenomenon as described cannot involve just the use of x-rays. The issue is that Superman can perceive color while using his superpower, and that’s not possible with x-rays.

A swain is a country lad, or a beau. Back in the 12th century, a swain was a young man who attended a knight.

59. Illness with its own season : FLU