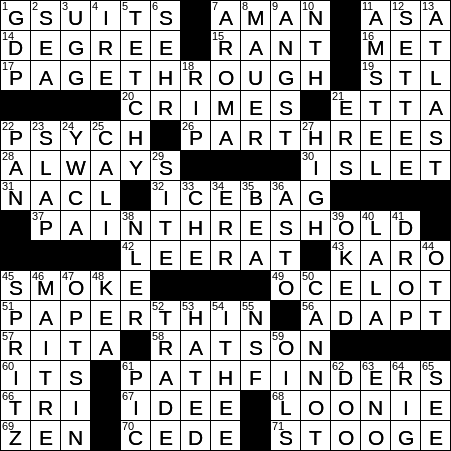 We can FIND “PA” and “TH” in our themed answers. Each comprises two words, the first starting with the letters PA- and the second with TH-:

“Walk Like a Man”, released in 1963, was the third number 1 hit for the Four Seasons. Apparently, the song was recorded in a studio while there was a fire blazing in the floor above. Bob Crewe, the record producer, insisted that the group keep on recording while smoke and water was seeping into the studio. Crewe blocked the door, forcing firemen to use axes to break it down so they could get everyone to safety.

Frankie Valli is a great singer, best known for fronting the Four Seasons in the sixties. Valli had an incredible number of hits, with and without the Four Seasons. The extensive list includes, “Sherry”, “Big Girls Don’t Cry”, “Walk Like a Man”, “Rag Doll”, “My Eyes Adored You” and “Grease”.

The vast Mississippi drainage basin covers much of the US, and even extends into Canada. As such, the river’s watershed at least part of 31 US states and two Canadian provinces. The Ojibwe name for the river is “Misi-ziibi”, meaning “Great River”, which French settlers rendered as “Messipi”, and which eventually evolved into our “Mississippi”.

Etta Place is the schoolteacher character played by the lovely Katharine Ross in the 1969 movie “Butch Cassidy and the Sundance Kid”.

A “key” (also “cay”) is a low offshore island, as in the Florida Keys. Our term in English comes from the Spanish “cayo” meaning “shoal, reef”.

Sodium chloride (NaCl, common salt) is an ionic compound. It comprises a crystal lattice made up of large chloride (Cl) ions in a cubic structure, with smaller sodium (Na) ions in between the chlorides.

If you ever get the chance to see it, I highly recommend the movie 1947 “Song of Love”, a biopic about the lives of Robert Schumann and his extraordinary wife Clara Wieck. Schumann is played by Paul Henreid (of “Casablanca” fame) and Clara is played wonderfully by Katherine Hepburn. Clara was a concert pianist, and as Katherine Hepburn was an accomplished pianist herself, you see Hepburn actually playing some challenging pieces herself at the keyboard (although the soundtrack does feature a professional player).

Joe Mauer is a professional baseball player from St. Paul, Minnesota who started playing for the Minnesota Twins in 2004. Mauer is famous for wearing long sideburns, it says here …

Amstel is a Dutch brewery that was founded in 1870 in Amsterdam. The brewery takes its name from the Amstel river that runs through the city.

Heineken Lager Beer is named for Gerard Adriaan Heineken, the brewer who founded the brewery in the Netherlands in 1873. The label on a bottle of Heineken beer includes a red star logo. The red star was a symbol used by European brewers in the Middle Ages. During the Cold War, the red star came to have a negative connotation, an association with communism. So for several years, Heineken used a white star with a red outline as a logo.

“Settee” is another word for a couch. The term come from the Old English “setl”, which was a long bench with a high back and arms.

“Che” is a 2008 film about the life of the revolutionary hero Che Guevara. Starring Benicio del Toro in the title role, the movie is in two parts. The first part is called “The Argentine” and deals with the part Guevara played in the Cuban Revolution. Part two is called “Guerrilla” and covers Guevara’s attempt to foment revolution in Bolivia.

The full title of a “maître d’” is “maître d’hôtel”, which means “master of the hotel”.