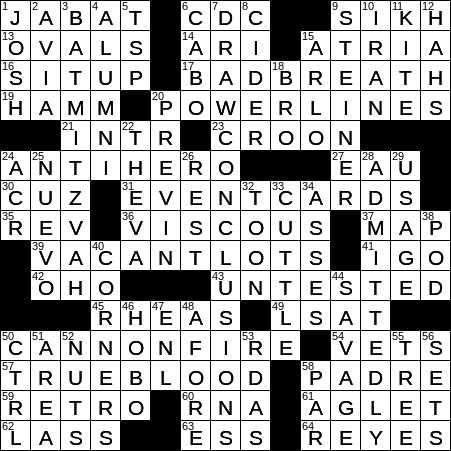 Themed answers CONCLUDE with things that are DRAWN:

Ari Shapiro served very ably as White House correspondent for National Public Radio (NPR) for several years. He then became a co-host of network’s drive-time program “All Things Considered” in 2015.

Mia Hamm is a retired American soccer player. She was a forward who played on the US national team that won the FIFA women’s World Cup in 1991. Hamm has scored 158 international goals, more than other player in the world, male or female. Amazingly, Hamm was born with a clubfoot, and so had to wear corrective shoes when she was growing up.

24 Bad guy you root for : ANTIHERO

An “antihero” is a character perhaps in a movie or novel. He or she is the “hero” of the piece, but is also someone who doesn’t exhibit the qualities associated traditionally with a hero, such as bravery or moral fortitude.

OneRepublic is a pop rock band that formed in 2002 in Colorado Springs. Initially, the band used the name “Republic”, but changed to “OneRepublic” to avoid possible conflict with similar band names.

“True Blood” is a television drama made by HBO. The series is based on a series of novels written by Charlaine Harris that describe human and vampires co-existing in a small town in Louisiana. I don’t do vampires …

The San Diego Padres baseball team was founded in 1969, and immediately joined the ranks of Major League Baseball as an expansion team. The Padres took their name from a Minor League team that had been in the the city since 1936. The name is Spanish for “fathers” and is a reference to the Franciscan Friars from Spain who founded San Diego in 1769.

An aglet is a plastic or metal sheath that is found on the end of a shoelace or perhaps a drawstring. The name “aglet” comes from the Old French word “aiguillette” meaning “needle”.

When the verb “to josh”, meaning “to kid”, was coined in the 1840s as an American slang term, it was written with a capital J. It is likely that the term somehow comes from the proper name “Joshua”, but no one seems to remember why.

A Jewish girl becomes a Bat Mitzvah at 12 years of age, the age at which she becomes responsible for her actions. Boys become Bar Mitzvahs at 13. The terms translate into English as daughter and son of the commandments.

André Previn was a pianist, conductor and composer who was born in Berlin, Germany but who grew up in Los Angeles. Previn won four Oscars for his work on the musical scores of “Gigi” (1958), “Porgy & Bess” (1959), “Irma la Douce” (1963) and “My Fair Lady” (1964). Previn was married five time, most famously probably to actress Mia Farrow.

Nogales (properly called “Heroica Nogales”) is a city in the Mexican State of Sonora. Nogales lies right on the Mexico-US border, opposite the city of Nogales, Arizona.

Cuttlefish are marine animals that are related to squids and octopodes. Cuttlefish have a unique internal shell and are molluscs, not fish.

No one seems to know for sure how the term “hobo” originated, although there are lots of colorful theories. My favorite is that “hobo” comes from the first letters in the words “ho-meward bo-und”, but it doesn’t seem very plausible. A kind blog reader tells me that according to Click and Clack from PBS’s “Car Talk” (a great source!), “hobo” comes from “hoe boy”. Hoe boys were young men with hoes looking for work after the Civil War. Hobos differed from “tramps” and “bums”, in that “bums” refused to work, “tramps” worked when they had to, while “hobos” traveled in search of work.