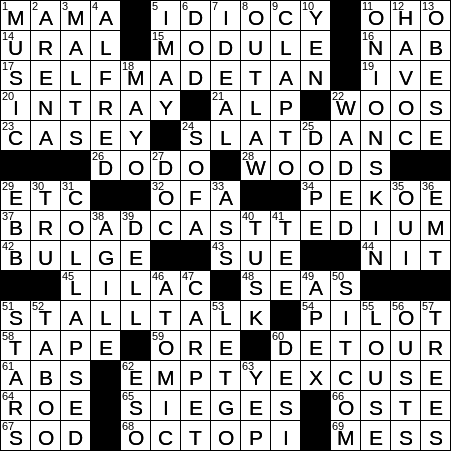 Themed answers are common phrases, but with an M exchanged for a T. That’s a pretty “MT” (sounds like “EMPTY”) EXCUSE for a theme:

“Mama Told Me Not to Come” is a song written by Randy Newman and most famously recorded by Three Dog Night in 1970. Tom Jones also had a hit with the song, recording a version with the Stereophonics in 2000.

Casey Jones was a famous railroad engineer who is remembered in the traditional song “The Ballad of Casey Jones”. The song tells us the story of Jones trying to stop his speeding train as it races towards another locomotive on the same line.

A pilot light is a small gas flame, one using a relatively small amount of fuel, that remains lit as an ignition source for larger gas burners.

Clara Schumann was a famous concert pianist, and the wife of composer Robert Schumann. Clara is known not only for her talent on the piano, but also for premiering works by Johannes Brahms, who was a dear friend of the Schumanns.

Alfred the Great was the King of Wessex in the latter part of the ninth century, and the dominant ruler in the whole of England. Wessex was the familiar name of the Kingdom of the West Saxons in the southwest of Britain.

11. Paper named for a vegetable : ONIONSKIN

Onionskin, although not made from onions, is a translucent, light-weight paper. It was used in days gone by when the weight and bulk of the paper was important. And so, onionskin was a good choice for use with carbon paper when making copies using a typewriter. It also was a good choice for airmail.

Apparently, “to dope out” is a slang term meaning “to figure out, infer from available information”. Our use of the word “dope” to mean “inside information” probably comes from horse racing. The idea is that a better might have information about which horse has been drugged (doped) to influence its performance.

The hard, white material called ivory has mainly been sourced from the tusks of elephants, although it can also be collected from the walrus, hippopotamus, killer whale, wart hog and others. The word “ivory” comes into English via Latin from the Ancient Egyptian word for “elephant”.

Actor Clark Gable was one of the most consistent earners for Hollywood studios, but won just one Best Actor Oscar (for the excellent “It Happened One Night”). He was married five times in all, including a three-year stint with actress Carole Lombard. Gable also had an affair with actress Loretta Young during the filming of “The Call of the Wild” in 1935. The result was a daughter born in 1935, after Young had a very secret pregnancy that was covered up by the film studio.