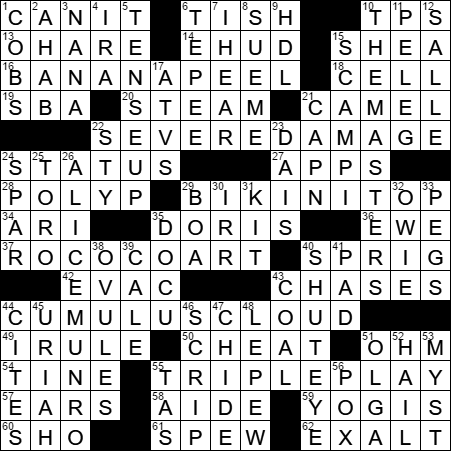 The first word in each of today’s themed answers includes just one vowel appearing three times, a TRIPLE PLAY of sorts. And, we progress through the vowels alphabetically going through the grid from top to bottom:

“Shea butter” is a common moisturizer or lotion used as a cosmetic. It is a fat that is extracted from the nut of the African shea tree. There is evidence that shea butter was used back in Cleopatra’s Egypt.

The Small Business Administration (SBA) is a government agency with the mission of assisting small businesses. The SBA doesn’t give loans itself, but it does act as a guarantor under the right circumstances. The SBA was set up in 1953, and isn’t a favorite with fiscal conservatives.

The dromedary, also known as the Arabian Camel or Indian Camel, is the camel that has only one hump. The other species of camel is the Bactrian, which has two humps. The hump of a dromedary contains up to 80 pounds of fat, which can be broken down into water and energy if no food or water is available.

Polyps are tiny sea creatures that are found attached to underwater structures or to other polyps. Polyps have a mouth at one end of a cylindrical “body” that is surrounded by tentacles. Some polyps cluster into groups called stony corals, with stony corals being the building blocks of coral reefs. The structure of the reef is provided by calcium carbonate exoskeletons secreted by the coral polyps.

29. Cause of some tan lines : BIKINI TOP

“All Things Considered” is the flagship news broadcast by NPR, aired for two hours every evening.

In Ancient Greece, thyme was burned as incense and used in baths as it was believed to be a source of courage.

At a poker table, a croupier might use a rake to pull in the chips, and that rake has tines, projecting points.

“The Affair” is a drama series on Showtime about a novelist and a waitress having an extramarital affair in a Long Island resort town. Stars of the show are the marvelous Dominic West and Ruth Wilson. I haven’t seen this one, but hear good things …

The most famous whale-hunting ship in fiction has to be Herman Melville’s Pequod, featured in his novel “Moby Dick”. The Pequod is a skippered by the maniacal Captain Ahab, and the young chief mate is the thoughtful and intellectual Starbuck. Starbuck’s name was lifted and used by a Seattle-based coffee company.

“I Hear a Symphony” is a 1965 hit song recorded by the Supremes, the trio’s sixth number-one in the US.

The Supremes were the most successful vocal group in US history, based on number-one hits. The group started out in 1959 as a four-member lineup called the Primettes. The name was changed to the Supremes in 1961. One member dropped out in 1962, leaving the Supremes as a trio. Lead singer Diana Ross began to garner much of the attention, which eventually led to a further name change, to Diana Ross & the Supremes.

The Augusta National Golf Club in Augusta, Georgia was founded in 1933 by Bobby Jones and Clifford Roberts. Famously, Augusta hosts the Masters Tournament each year. Augusta is very much a private club, and some of its policies have drawn criticism over the years. Prior to 1959, the club had a bylaw requiring that all caddies be African American. There were no African-American club members admitted until 1990, and no women until 2012.

The Pequod is the ship that figures in Herman Melville’s classic novel “Moby Dick”. The ship is owned by a consortium of the citizens of Nantucket Island, including Captains Ahab, Bildad and Peleg.

In French, there are several “salles” (rooms) in a “maison” (house).

Toro is a manufacturer of mainly lawn mowers and snow removal equipment based in Bloomington, Minnesota. The company was started in 1914 to build tractor engines.

Uriah Heep is a sniveling insincere character in the novel “David Copperfield” by Charles Dickens. The character is such a “yes man” that today, if we know someone who behaves the same way, then we might call that person a “Uriah Heep”.

“Scrip” is an informal term for a prescription.

Pepé Le Pew is a very likeable cartoon character from the Looney Tunes and Merrie Melodies series. Pepé is a French skunk, first introduced way back in 1945. He is always thinking of “l’amour” and chases the lady skunks, or a black cat with a white stripe accidently painted down her back.

A “proctor” is a supervisor, especially of an examination in a school, or perhaps of a dormitory. The word “proctor” originated in the late 1500s, a contraction of the word “procurator”, the name given to an official agent of a church.

22. Reason for totaling, as an insured car : SEVERE DAMAGE

29. Cause of some tan lines : BIKINI TOP