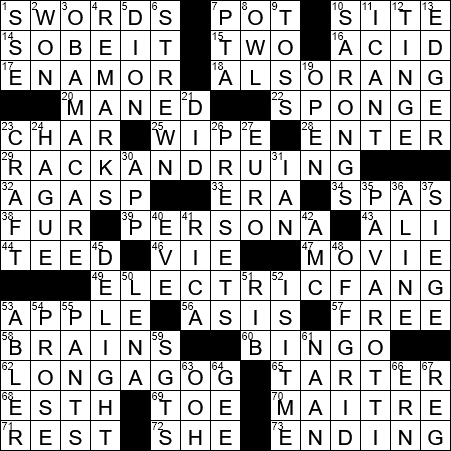 Themed answers are each common phrases to which have been added a letter G at the end:

It takes two to tango …

Bad is the German word for “bath”, and is found in the names of many spa towns such as Bad Ems, Bad Nauheim, Marienbad and Baden-Baden.

Bad Ems is a spa town in western Germany that was a extremely popular with the elite, especially in the 19th century. Frequent visitors to the town include Kaiser Wilhelm I, Tsar Nicholas I, Richard Wagner and Fyodor Dostoevsky.

Mariánské Lázně is a relatively young spa town in the west of the Czech Republic that is located close to the border with Germany. Known in German as “Marienbad”, the town was a very popular getaway for the European elite and was visited by the likes of Frédéric Chopin, Thomas Edison, and Richard Wagner, as well as the UK’s King Edward VII, Tsar Nicholas II of Russia, and Emperor Franz Joseph I of Austria. Most of the ethnic Germans in Marienbad, which was part of Sudetenland, were expelled after WWII, and it came under communist control along with the rest of Czechoslovakia as a result of the 1948 coup d’état. The town was largely closed to foreigners for decades, but has been flourishing again as a tourist destination since the return of democracy in 1989.

Supposedly, William Tell came from Uri, a canton in the German part of Switzerland. Altdorf is the capital of Uri and is the city where William Tell shot the apple off his son’s head using a crossbow, at least according to legend. There is a bronze statue of Tell that was erected in the city’s marketplace in 1895 to memorialize the event.

In French, one might learn from a “maître” (master) in an “école” (school).

Here is the full text of William Shakespeare’s “Sonnet 130”:

My mistress’ eyes are nothing like the sun;
Coral is far more red than her lips’ red;
If snow be white, why then her breasts are dun;
If hairs be wires, black wires grow on her head.
I have seen roses damasked, red and white,
But no such roses see I in her cheeks;
And in some perfumes is there more delight
Than in the breath that from my mistress reeks.
I love to hear her speak, yet well I know
That music hath a far more pleasing sound;
I grant I never saw a goddess go;
My mistress when she walks treads on the ground.
And yet, by heaven, I think my love as rare
As any she belied with false compare.

The correct name for what has been dubbed “Obamacare” is the “Patient Protection and Affordable Care Act” (ACA).

Back in the late 16th century, to discard was to throw away a “card” in card game. We now use the term to describe the rejection of anything, and not only cards.

“Sarong” is the Malay word for “sheath”, and the term originally described a garment worn by Malay men and women around their waists. The Malay sarong is actually a tube of fabric, about a yard wide and two-and-a-half yards long. Many variations of the sarong are worn all over South Asia and the Pacific Islands. I had occasion to wear one in Hawaii many years ago, and found it very … freeing!

Den Haag is the Dutch name for the city in the Netherlands that we know in English as The Hague. Even though the Hague is the seat of the Dutch parliament and is where Queen Beatrix resides, it is not the country’s capital city. That honor goes to Amsterdam.

International Court of Justice (ICJ) is commonly referred to as the World Court, and is based in the Hague in the Netherlands. Housed in a building known as the Peace Palace, the ICJ is the main judicial branch of the United Nations. One of the court’s functions is to settle disputes between UN member states. The US no longer accepts the jurisdiction of the ICJ, after the court’s 1986 decision that the US’s covert war against Nicaragua was in violation of international law. The UN Security Council is charged with enforcing ICJ rulings, and so the US used its veto power in the Nicaragua v. United States case.

The Euro is the official currency of most of the states in the European Union, but not all. The list of EU states not using the Euro includes the UK, Denmark and Sweden.

“The Iliad” is an epic poem by the Greek poet Homer that tells the story of the ten-year siege of Ilium (also known as “Troy”) during the Trojan war. “The Odyssey”, also attributed to Homer, is sometimes described as a sequel to “The Iliad”.

AMC, formerly known as “American Movie Classics”, is one of my favorite television channels. Although the channel’s focus has shifted from airing classic movies to including other programming, there’s still a lot of quality output. AMC’s flagship shows are “Mad Men” and “Breaking Bad”.

“Preacher” is a TV series based on a comic book superhero series of the same name. Doesn’t sound like my cup of tea …

To be off-the-grid is to adopt a lifestyle that eschews the support of remote infrastructure, such as the electrical grid and public sewer system. My personal observation is that more and more people in the West are striving to live off-the-grid, although not many seem interested in breaking the link to the Internet …

The term “pants”, meaning trousers, is an abbreviated form of “pantaloons” and first appeared in the 1840s. Pantaloons were a kind of tights named for a silly old male character in Italian comedy named “Pantaloun” who always wore tight trousers over skinny legs.

The word “tikka” in Indian cuisine refers to a cutlet of meat.