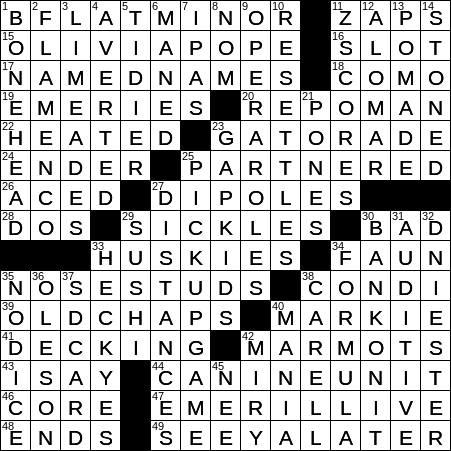 Gatorade was developed at the University of Florida by a team of researchers at the request of the school’s football team. And so, Gatorade is named after the Gators football team.

When German physicist Heinrich Hertz first demonstrated radio waves in 1887, he used the simplest form of antenna, namely a dipole antenna. A dipole antenna comprises two metal rods that are usually pointing away from each other. ideally, the length of each rod is set at one half of the wavelength off the signal to be received.

The pixie cut is a hairstyle that is relatively short at the back and sides compared to the top. Famous examples of women wearing the cut are Audrey Hepburn in “Roman Holiday”, Twiggy for much of the 1960s, Goldie Hawn on “Laugh-In” and Halle Berry in the Bond film “Die Another Day”.

The Huskies are the sports teams of the University of Washington. A student committee chose the husky as the school mascot in 1923, replacing the existing Sun Dodger. The name “Sun Dodger” was an abstract reference to the cloudy weather experienced in Washington.

Condoleezza “Condi” Rice was the second African American to serve as US Secretary of State (after Colin Powell) and the second woman to hold the office (after Madeleine Albright). Prior to becoming Secretary of State in President George W. Bush’s administration, Rice was the first woman to hold the office of National Security Advisor. In private life, Rice is a remarkably capable pianist. Given her stature in Washington, Rice has had the opportunity to play piano in public with the likes of cellist Yo-Yo Ma, and soul singer Aretha Franklin.

President George W. Bush was nicknamed “Dubya” based on the Texas pronunciation of his middle initial “W”.

Biz Markie is the stage name of rapper Marcel Theo Hall. Markie has the nickname “the Clown Prince of Hip Hop”. His biggest hit is 1989’s “Just a Friend”.

Marmots are large ground squirrels. Included in the genus is the famous groundhog, but not the equally famous prairie dog.

“Creole” is the term used in Haiti to describe all of the native people, as well as the music, food and culture of the country. 80% of the Haitian Creole people are so called black creoles, descendants of the original Africans brought to the island as slaves during the French colonial days.

The word “stave” was originally the plural of “staff”, a word describing a wooden rod. To “stave off” originated with the concept of holding off with a staff. In the world of barrel-making, a stave is a narrow strip of wood that forms part of a barrel’s side.

A tidy sum, a pretty penny, a considerable amount of money.

“Nom de guerre” is a French term meaning “name of war”. It describes the practice of adopting a pseudonym when in a conflict, perhaps to protect family or to symbolize a separation between one’s life in the military and as a civilian. The term originates with the French Foreign Legion, in which recruits routinely adopted noms de guerre as they broke with their past lives and started afresh.

In the world of statistics, a z-score is the distance a specific observation is away from the mean of a normal distribution. For z-scores, that distance is measured in standard deviations.

Roberto Alomar is a former Major League Baseball (MLB) player, considered by many to be the greatest ever second baseman. Alomar won 10 Gold Glove awards in his career, which is more than any other second baseman in history. Roberto is the son of MLB second baseman Sandy Alomar Sr., and the younger brother of MLB catcher and base coach Sandy Alomar Jr.

Johnnycake is a flatbread made from cornmeal that is associated with the Atlantic coast. There are claims that johnnycake originated in Rhode Island.

32. River to the Black Sea : DNIESTER

The Dniester (also “Dnister”) is a river that rises in the Ukraine and empties into the Black Sea. For much of its length, it marks the border between Ukraine and Moldova.

Formula fiction is literature that is formulaic (!), fiction that uses storylines and plots that are predictable as they have been used in similar works over and over again.

One suggestion for the origin of the phrase “no dice”, meaning “nothing doing, no way”, refers back to illegal gambling in the early 1900s. When approached by police, illegal gamblers would hide their dice (some even swallowed them). It was well known that city attorneys wouldn’t prosecute unless the police could produce the dice. Apparently there was an idiom at the time, “no dice, no conviction”.

In the TV show “Little House on the Prairie”, Nellie Oleson is a daughter of mercantile owners Nels and Harriet Oleson. Nellie is a manipulative and sharp-tongued girl. Played by Alison Arngrim, Nellie’s role is greatly amplified in the TV show relative to the original “Little House” series of novels by Laura Ingalls Wilder.

The actor Steve Carell has achieved great success on both television and in movies. On the small screen, Carell came to prominence on “The Daily Show with Jon Stewart” and then of as the lead in the US version of “The Office”. On the big screen, he starred in “The 40-Year-Old Virgin”, “Evan Almighty”. My personal favorite Carell movie is 2007’s ”Dan in Real Life”, in which he stars opposite the wonderful Juliette Binoche.