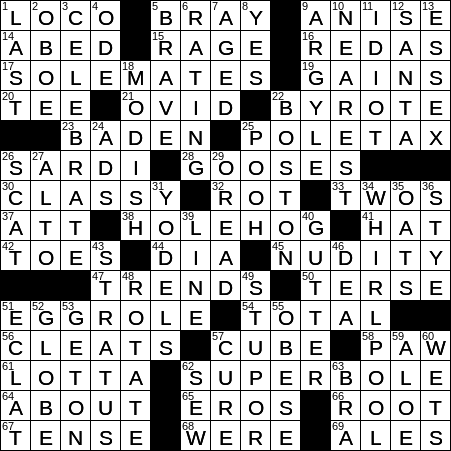 16 Trio in the logo of a national motorists’ group : RED AS

A poll tax is a fixed sum levied equally on every liable individual. “Poll” is a 14th-century word for “head, hair of the head”.

To goose is to prod into action, albeit a in a very rude way. A “goose” is a prod or a pinch in the rear end.

38 Rabbit monopolizing the entrance to the warren? : HOLE HOG (sounds like “whole hog”)

We tend to think of a “warren” today as a place where rabbits are bred, or where rabbits are found in abundance in the wild. Back in the 1300s, a warren was a more general term for an enclosed piece of land used for breeding any domestic animals. We also use “warren” figuratively now, to describe a cluster of densely populated living spaces.

Ancient Laconia was a region in southern Greece that was dominated by the city of Sparta. The people from Laconia were proud of their brevity of speech, which gives rise our modern term “laconic” meaning someone who uses few words.

Humpty Dumpty is a character in a nursery rhyme, actually an egg although that isn’t specifically called out in the original rhyme:

Our lovely word “tavern” comes into English via Old French from the Latin “taberna”, the word for a “shop, inn, alehouse”.

English Romantic poet John Keats wrote the famous “Ode on a Grecian Urn” in 1819, and published it anonymously in 1820. The most famous lines of the poem are the last two:

“Beauty is truth, truth beauty,” – that is all
Ye know on earth, and all ye need to know

13 County not far from London : ESSEX

“The Boston Globe” is a daily newspaper that was founded in 1872 as a morning daily. “The Boston Evening Globe” followed a few years later, although it ceased publication in 1979. Today you can read the online version of “The Globe” at Boston.com.

The Oreads were the mountain nymphs that accompanied the ancient Greek goddess Artemis on her hunting expeditions. Each Oread dwelled on a different mountain, for example:

Stratus clouds (plural “strati”) are very common, and as they are wider than they are tall and flat along the bottom, we might just see them as haze in a featureless sky above us. Stratus clouds are basically the same as fog, but some distance above the ground. Indeed, many stratus clouds are formed when morning fog lifts into the air as the ground heats up.

“Éclat” can describe a brilliant show of success, as well as the applause or accolade that one receives for that success. The word “éclat” derives from the French “éclater” meaning “to splinter, burst out”.

Bali is an American lingerie company that has been around since 1927.