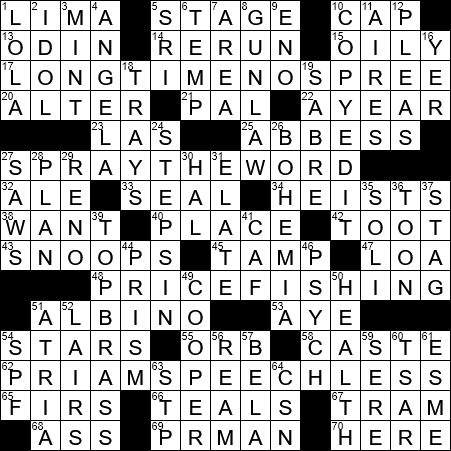 Lima is the capital city of Peru. Lima was founded in 1535 by the Spanish conquistador Francisco Pizarro, who named it “la Ciudad de los Reyes” (the City of Kings). He chose this name because the decision to found the city was made on January 6th, the feast of the Epiphany that commemorates the visit of the three kings to Jesus in Bethlehem. Lima is home to the oldest university in all of the Americas, as San Marco University was founded in 1551 during the days of Spanish colonial rule.

27 Pastoral exhortation to a graffiti artist? : SPRAY THE WORD (from “say the word”)

“SEAL” is an acronym used by the US Navy’s SEa, Air and Land teams. The SEALs were born out of the Navy’s special warfare groups from WWII, like the Underwater Demolition Teams and the Motor Torpedo Boat Squadrons. The Navy SEAL unit was established soon after President Kennedy’s famous speech in which he announced the plan to put a man on the moon, as in the same speech the president allocated $100m of funding to strengthen special operations forces. The Navy used some of this money to set up guerrilla and counter-guerrilla units, which soon became the SEALs.

In Herman Melville’s 1851 novel “Moby-Dick”, the animal named in the title is an albino sperm whale.

62 Trojan king struck dumb? : PRIAM SPEECHLESS (from “I am speechless”)

Priam was King of Troy during the Trojan War. Reputedly, Priam was father to fifty sons and many daughters with his many wives. His eldest son and heir to the throne was Hector. Paris was another of Priam’s sons, the man who caused the Trojan War by eloping with Helen, Queen of Sparta.

The Cable Car Museum in San Francisco is a little special in that it is housed in the same complex as the city’s cable car power house. While touring the museum, visitors can look out over the power house and see the huge haulage cables heading out to the streets to pull the cars up all of those steep hills.

“Lola” is a fabulous song that was written by Ray Davies and released by the Kinks back in 1970. Inspired by a real life incident, the lyrics tell of a young man who met a young “lady” in a club, danced with her, and then discovered “she” was actually a transvestite. The storyline isn’t very traditional, but the music is superb.

4 Actress Kinsey of “The Office” : ANGELA

Actress Angela Kinsey is best known for playing accountant Angela Martin on “The Office”. Although Kinsey was born in Louisiana, she grew up in Indonesia, and occasionally speaks Indonesian.

6 Census worker, for one : TEMP

“Yer Blues” is a John Lennon song, credited to Lennon and McCartney, that is a track on “The White Album”, recorded in 1968. Lennon recorded the song while the band was on retreat in Rishikesh, India, and while Lennon was “trying to reach God and feeling suicidal”.

Composer and pianist Burt Bacharach had an incredible run of hits from the fifties through the eighties, usually working with lyricist Hal David. Bacharach’s hits ranged from “Magic Moments”, a fifties hit for Perry Como, “Close to You”, a sixties hit for the Carpenters, and “Arthur’s Theme”, a hit for Christopher Cross in the seventies. Bacharach was married to Angie Dickinson for fifteen years.

In the US Military, the Joint Chiefs of Staff is a body comprised of:

49 “The Last of the Mohicans” author : COOPER

James Fenimore Cooper’s most famous works are the romantic novel “The Last of the Mohicans” and the collection of historical novels known as the “Leatherstocking Tales” featuring the hero Natty Bumppo. James Fenimore was the son of William Cooper, a US Congressman. The Cooper family lived in Cooperstown, New York that was a community founded by James’s father William Cooper.

“The Last of the Mohicans” is an 1826 novel by James Fenimore Cooper. It is the second in a series of five novels that comprise the “Leatherstocking Tales”. All five titles are:

Banana Boat is a brand of sunscreen.

57 One sometimes seen with Boris : BELA

“Boris Karloff” was the stage name of English actor William Henry Pratt. Karloff famously played the monster in a series of “Frankenstein” movies in the 1930s. Karloff also played the Grinch, and the narrator, in the oft-seen 1966 animated adaptation of Dr. Seuss’s “How the Grinch Stole Christmas!” that was made for television.

The House of Romanov was the second and last imperial dynasty to rule over Russia, after the Rurik dynasty. The reign of the Romanovs ended when Emperor Nicholas II abdicated following the February Revolution of 1917. Famously, Nicholas II and his immediate family were murdered soon after he stepped down, and other members of the Romanov Dynasty were sent into exile by the Bolsheviks.

61 Salinger character who says, “I prefer stories about squalor” : ESME

J. D. Salinger wrote a short story called “For Esmé – with Love and Squalor” that was originally published in “The New Yorker” in 1950. It is a story about a young English girl called Esme and an American soldier, and is set in WWII.