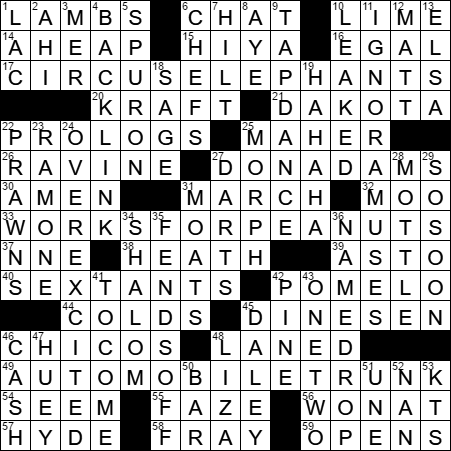 Each of today’s themed answers ENDS with something elephantine:

Scurvy is a disease brought about by a lack of vitamin C in the diet. Famously, the disease was a focus in the navies of the world. Symptoms start to appear after a month with little or no vitamin C in the diet, and so scurvy was an issue that affected extended sea voyage. The Royal Navy surgeon James Lind proved in 1753 that scurvy could successfully be prevented and treated with citrus fruit.

“Égal” (feminine “égale”) is the French word for “equal, alike”, and a word we sometimes use in English. The national motto of France is “Liberté, égalité, fraternité”, meaning “Liberty, equality, fraternity (brotherhood).

“Paris Match” is a weekly magazine published in France that first appeared on newsstands in 1949.

21. NYC building that was Lennon’s last home, with “The” : DAKOTA

Bill Maher is a stand-up comedian and political commentator. Maher has an HBO television show called “Real Time with Bill Maher” which is essentially a follow-on from the very successful “Politically Incorrect” program that started out on Comedy Central.

Actor Don Adams was born Donald Yarmy in New York City. Prior to launching his career in show business, Adams served in the US Marine Corps during WWII. He participated in the Battle of Guadalcanal, but soon after he contracted a complication from malaria known as blackwater fever. The serious condition resulted in him being evacuated to a Navy hospital in New Zealand where he spent over a year under treatment. After the war, Adams became a comic, and famously in 1965 started to play Maxwell Smart in the sitcom “Get Smart”.

The full name of the cattle breed is Aberdeen Angus, which is also the name used around the world outside of North America. The breed was developed by crossbreeding cattle from the counties of Aberdeenshire and Angus in Scotland. The breed stands out in the US as Angus cattle don’t have horns.

The navigation tool known as a sextant is used to measure the angle between two visible objects, with one of those objects usually being the horizon. The primary role of a sextant is to determine latitude. The term “sextant” is said to have been coined by Danish astronomer Tycho Brahe around the year 1600. The name comes from the fact that a sextant is constructed around a graduated arc of 60 degrees, one sixth part of a full circle.

Isak Dinesen was the pen name of the Danish author Baroness Karen Blixen. Blixen’s most famous title by far is “Out of Africa”, her account of the time she spent living in Kenya.

Chico’s is a chain of retail stores selling women’s clothing that was founded in 1983. The founders were Marvin and Helene Gralnick, and they named their stores after a friend’s pet parrot, Chico.

Lake Retba in Senegal is located just outside the capital city of Dakar. It is also named “Lac Rose” (“Pink Lake” in French), a reference to the water’s pink color caused by a red pigment that is produced by algae.

The Republic of Senegal is a country on the far western coast of Africa. For many years Senegal was a French colony, gaining independence in 1960. The capital of Senegal is Dakar, a city located on the Cap-Vert Peninsula that juts out into the Atlantic Ocean.

A backlink on a web page is like a citation at the bottom of a printed page. That backlink points to another web page, perhaps citing a source for information.

9. Cagney does it on stairs in “Yankee Doodle Dandy” : TAP DANCE

“Yankee Doodle Dandy” is the musical biopic about the life of George M. Cohan, released in 1942. Jimmy Cagney plays the part of Cohan, a fitting choice as Cagney started his career as a song-and-dance man, just like Cohan. There is a palpable, patriotic feel to the film, something that is very deliberate. Production of the film was just a few days underway at the end of 1941 when the Japanese attacked Pearl Harbor. The cast and crew met soon after the attack, and resolved that their movie would be uplifting and patriotic.

“Ignoramus” comes to us directly from Latin. The term translates from Latin as “we ignore”, the first person, plural tense of “ignorare”.

“The Ramones” were an American punk rock band. The group formed in Forest Hills, New York in the mid-seventies. Arguably, it was the first punk rock group, defining the genre. Something else that’s not my cup of tea …

“Shalom” is a Hebrew word meaning “peace” that is also used to mean “hello” and “goodbye”.

Those would be punches.

Richard J. Daley was the Mayor of Chicago for 21 years (1955-1976), making him the longest-serving mayor for the city in history. His son, Richard M. Daley, was mayor until relatively recently, and was the city’s second-longest serving mayor.

Huey Lewis and the News are a local band out here in the Bay Area, based in San Francisco. When the movie “Ghostbusters” came out in 1984, the band sued Ray Parker, Jr. who wrote the film’s theme song, claiming that it was very similar to their own song “I Want a New Drug”. The case was settled out of court, and the following year “Huey Lewis and the News” made the most of an opportunity to write a movie theme themselves. Their smash hit “The Power of Love” was written for “Back to the Future”, and propelled the band into stardom.

“Liza with a ‘Z’” is a TV film of a 1972 concert given by Liza Minnelli. The film was co-produced by Bob Fosse, who had also directed Minnelli in the very successful film “Cabaret” that was released just a few months before the concert.

Nan Goldin is an American photographer who is based in New York, Berlin and Paris.

Knights (kts.) are the only pieces on a chessboard that can jump over other pieces.

21. NYC building that was Lennon’s last home, with “The” : DAKOTA

33. Makes next to nothing : WORKS FOR PEANUTS

6. Ones doing the dishes : CHEFS

9. Cagney does it on stairs in “Yankee Doodle Dandy” : TAP DANCE