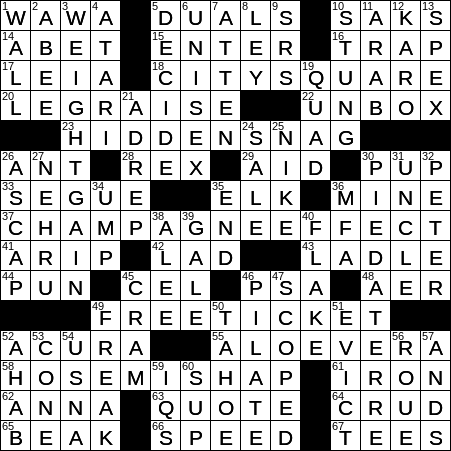 Themed clues can be interpreted as moves made in American football:

Princess Leia is Luke Skywalker’s twin sister in the original “Star Wars” trilogy and was played by Carrie Fisher. Carrie Fisher has stated that she hated the famous “cinnamon bun hairstyle” that she had to wear in the films, as she felt it made her face look too round. She also had to to sit for two hours every day just to get her hair styled. Two hours to get your hair done? It takes me just two seconds …

Rex Harrison was an English actor who played many memorable roles on stage and screen. On stage, Harrison famously played Henry VIII in “Anne of the Thousand Days” and Professor Higgins in “My Fair Lady”. His best known film appearances were in “Anna and the King of Siam”, “The Ghost and Mrs. Muir”, “My Fair Lady”, “Cleopatra” and “Doctor Dolittle”. Harrison was married six times. He had an affair with actress Carole Landis during his second marriage, and Harrison’s refusal to get a divorce led to Landis’s suicide. His fifth wife was actress Rachel Roberts. Years after the couple divorced, Roberts also committed suicide after repeated attempts to win back Harrison’s affection.

The Acura Legend model of car was sold as the Honda Legend over in Japan.

A snag is a pull or a tear in a fabric. A snag, particularly in stockings, might lead to a run. And on the other side of the Atlantic, a “run” is called a “ladder”.

“Bartlett’s Familiar Quotations” is a popular reference work containing tons of quotations. Bartlett’s was first issued in 1855, and as such is the longest-lived collection of quotations that we have available to us. The book started as a private list of quotes gathered by John Bartlett who ran the University Bookstore in Cambridge, Massachusetts. He kept the list as he was always being asked “who said?” by customers.

Woodpeckers peck into wood for several reasons. Firstly, pecking in to wood can reveal food, usually insects or insect larvae. Secondly, pecking can also create a hole that can be used for nesting. Thirdly, pecking can send messages to other woodpeckers, often declaring territory and sometimes attracting a mate.

Bob Ley works as a sportscaster with ESPN. Ley has worked with ESPN longer than any other on-air employee.

When we sit at a counter in a diner say, there’s a connection with money lenders. Back in the mid-1300s, a counter was the table used by a money lender doing business. The term “counter” came into English from Latin via French, ultimately from “computare” meaning “to count”.

Nike was the Greek goddess of victory, and was often referred to as “the Winged Goddess of Victory”. The athletic shoe company Nike uses the “Nike swoosh” as its logo, a logo that is inspired by the goddess’ wing.

30. Apartment used for overnight trips to the city : PIED-A-TERRE

A pied-à-terre is a secondary living space or temporary accommodation, often somewhere to live in a big city that is some distance away from a primary residence. “Pied-à-terre” is French for “foot on the ground”.

The Juilliard School, now located in the Lincoln Center in New York City, was founded in 1905 as the Institute of Musical Art. The school was named in honor of Augustus D. Juilliard, a successful textile merchant who left a substantial amount of money for the purpose of advancing music in the US. The immense popularity of the school is perhaps illustrated by its acceptance rate. In 2007 the school had 2,138 applications, and only 162 students were admitted. That’s an acceptance rate of well under 10%.

Queequeg is a character in Herman Melville’s classic tale “Moby Dick”. Queequeg is the chief harpooner on the boat. He is also the son of a South Sea chieftain, and a cannibal who is covered in tattoos.

54. Military sch. whose mascot is Bill the Goat : USNA

Bill the Goat is the US Naval Academy’s mascot. The first mascot for the school was a gorilla, and then followed a couple of cats, a bulldog and a carrier pigeon. The first goat to make an appearance as a mascot was named El Cid, and that was back in 1893. A goat has been the USNA’s mascot continuously since 1904.

“Roue” is a lovely word, I think, one used to describe a less than lovely man, someone of loose morals. “Roue” comes from the French word “rouer” meaning “to break on a wheel”. This describes the ancient form of capital punishment where a poor soul was lashed to a wheel and then beaten to death with cudgels and bars. I guess the suggestion is that a roue, with his loose morals, deserves such a punishment.

Although it is correct these days to say that the abbreviation IQ stands for “intelligence quotient”, the term was actually coined by German psychologist William Stern, and so is actually an abbreviation for the German “Intelligenz-Quotient”.