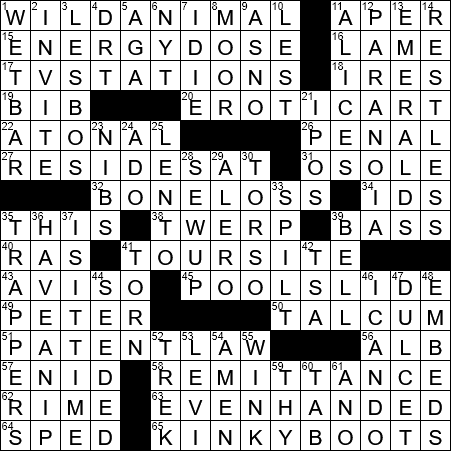 Lamé is a fabric that has metallic yarns included in the weave. Lamé is a popular fabric for stylish evening wear, and also in the sport of fencing. The metallic threads are conductive and so help register a touch by an épée.

19 Where food may be collected : BIB

“Don Giovanni” is a comic opera by Mozart, with a libretto in Italian by Lorenzo Da Ponte. The opera follows the adventures of Don Giovanni, a young rakish nobleman who finally comes to a bad end.

A dispatch boat is a military vessel designed to carry dispatches to and from ships. In the French navy, a dispatch boat is called an aviso. Nowadays, the need for dispatch boats has disappeared, but avisos still exist and are a class of combat vessel usually used in the defense of a coast against encroachment by enemies.

Musician Peter Cetera was one of the original members of the rock band Chicago. After his days with Chicago, Cetera built a successful solo career for himself.

65 Musical with the song “Sex Is in the Heel” : KINKY BOOTS

“Kinky Boots” is a 2012 musical with music and lyrics by singer/songwriter Cyndi Lauper. The musical is based on a 2005 film of the same name, which in turn was inspired by an episode from a BBC documentary series “Trouble at the Top”. “Kinky Boots” is based on the true story of struggling shoe factory that was saved from closure when it started producing fetish footwear for men.

The 2000 movie “Dr. T & the Women” is a pretty good film, and stars Richard Gere in the title role. It’s a romantic comedy about a gynecologist, and the women in his private and public life. The list of actresses playing those women is impressive, and includes Helen Hunt, Farrah Fawcett, Laura Dern, Shelley Long, Kate Hudson and Liv Tyler.

“The Hound of the Baskervilles” is one of four “Sherlock Holmes” novels written by Sir Arthur Conan Doyle, and it is regarded by many fans as the best of the series. “The Hound …” tells of a murder attempt on Dartmoor in Devon, England that is disguised as the act of a legendary supernatural hound. The novel also marks Doyle’s revival of his Sherlock Holmes character after he “killed him off” eight years earlier in a story called “The Final Solution”.

11 Eatery “just a half a mile from the railroad track” : ALICE’S

Frédéric Chopin’s “Piano Sonata No. 2” includes a third movement that is better known as his “Marche funèbre” (Funeral March). That famous movement was played at Chopin’s own funeral in 1849 as he was laid to rest in Père Lachaise Cemetery in Paris.

The Franklin half dollar coin became available in 1948. It features a profile Benjamin Franklin on the obverse (hence the name “Franklin”), and the Liberty Bell (complete with crack) on the reverse. It was replaced by the Kennedy half dollar in 1964, just a few months after President John F. Kennedy’s assassination.

That would be rye bread.

47 Pleasing to the ear : DULCET

“Dulcet” means “pleasing to the ear” and is such a lovely word, I think. It comes from the Old French word “doucet”, a diminutive of “doux”, which is the French for “sweet”.