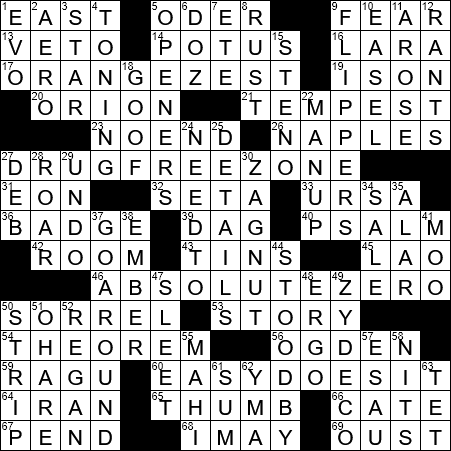 Today’s Reveal Answer: Easy Does It

Themed answers each include the short letter string EZ. One word of the answer ends with E, and the following word starts with Z:

When Franklyn D. Roosevelt was sworn in as president for his first term, he made a 20-minute inaugural address. The most famous lines of the speech are probably:

So, first of all, let me assert my firm belief that the only thing we have to fear is…fear itself — nameless, unreasoning, unjustified terror which paralyzes needed efforts to convert retreat into advance. In every dark hour of our national life a leadership of frankness and of vigor has met with that understanding and support of the people themselves which is essential to victory. And I am convinced that you will again give that support to leadership in these critical days.

President of the United States (POTUS)

Lara Croft was introduced to the world in 1996 as the main character in a pretty cool video game (I thought, back then) called “Tomb Raider”. Lara Croft moved to the big screen in 2001 and 2003, in two pretty awful movie adaptations of the game’s storyline. Angelina Jolie played Croft, and she did a very energetic job.

Marmalade is my favorite fruit preserve. The essential ingredients in a marmalade are fruit juice and peel, and sugar and water. “Marmalade” comes from the Portuguese “marmelada” meaning “quince jam”.

26. City in Florida or Italy : NAPLES

Absolute zero is a temperature that can theoretically be reached by removing all the “energy” of the test vehicle that is being “frozen”. This temperature is designated as 0 degrees on the Kelvin scale, equivalent to -273.15 degrees centigrade. Scientists try to get as close to absolute zero as possible because matter has weird and wonderful properties at such cold temperatures, such as superconductivity and superfluidity.

The Prego brand of pasta sauce is owned by the Campbell Soup Company. It is actually based on the family recipe of one of the company’s chefs. “Prego” literally means “I pray” in Italian, but it translates in English best as “you’re welcome” when it is used after a “thank you” (“grazie”, in Italian).

The countries of Turkmenistan, Afghanistan and Pakistan lie along Iran’s northern and eastern borders.

The Bastille is a former fortress in Paris that was used as a prison by the kings of France. On 14 July 1789, an angry mob stormed the Bastille during the French Revolution. The mob was actually after the stores of gunpowder in the fortress, but while inside the building freed seven prisoners and killed the Bastille’s governor. The storming of the Bastille became a symbol of the French Revolution and has been celebrated in France on every July 14th since 1790. That celebration is referred to as “la fête nationale” (the national day) in France, but in English-speaking countries it is usually known as “Bastille Day”.

“Cotillion” is an American term that we’ve been using since about 1900 for a formal ball. In France, a cotillion was a type of dance, with the term deriving from an Old French word for a petticoat. I guess the cotillion dance was one in which the lady would flash her petticoats as she did a twirl!

28. Katy Perry hit with the lyric “Louder, louder than a lion” : ROAR

Katy Perry is an American singer who grew up listening to and singing gospel music, as she was the daughter of two Christian pastors. In fact, her first musical release was a gospel album in 2001. She has branched out since then. Her first successful single was “Ur so Gay”, followed by “I Kissed A Girl”. She was married (for only a year) to the British comedian Russell Brand, until 2012.

The Zagnut candy bar is a tad unusual in that it contains no chocolate. Introduced in 1930, Zagnut bars have seen a resurgence in popularity over the past decade. Apparently, the lack of chocolate to melt is appreciated by US troops deployed in warm climates.

Apparently, “sleet” is a term used to describe two different weather conditions. One is a shower of ice pellets, smaller than hail, and the second is a mixture of rain and snow, with the snow melting as it falls.

Zydeco is a style of folk music that evolved from Creole music in Louisiana. The name “Zydeco” is imitative of the French word for green beans, “les haricots”. The term arose from a popular dance tune called “Les Haricots Sont Pas Salés” (“The Green Beans Ain’t Salty”).

Yma Sumac was a Peruvian soprano. Sumac had a notable vocal range of five octaves.