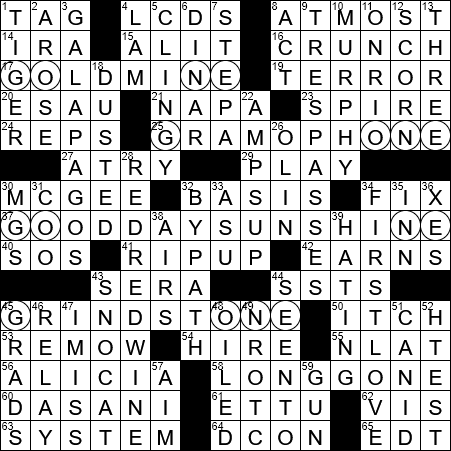 Today’s themed answers each contained the circled letters GONE. That word “GONE” is stretched out in the answer, as “LONG GONE”.

One World Trade Center (One WTC) is the legal name for the tallest building in the US that is known colloquially as “Freedom Tower”. The building stands at the symbolic height of 1776 feet.

“Fibber McGee and Molly” was one of the longest-running comedies on radio, originally airing from 1935 to 1959. Fibber McGee and Molly were a married couple, as were the actors who played them: Jim Jordan and Marian Driscoll. The show was set in the Illinois city of Peoria, and that’s where Jordan and Driscoll were born and where they lived in real life.

“Good Day Sunshine” is a Beatles song from the 1966 “Revolver” album. As for all Beatles numbers, writing credits for “Good Day Sunshine” go to Lennon-McCartney, but McCartney actually composed the song, and indeed provides lead vocals, as well as the piano and bass guitar tracks.

d-Con is a line of rodent control products that has been around for over 50 years.

What’s known as plastic wrap in America, we call cling-film in Ireland. The brand name “Saran” is often used generically in the US, while Glad wrap is common down under. Plastic wrap was one of those unintended inventions, a byproduct of a development program to create a hard plastic cover for cars.

The dinar is the official currency in many countries, such as Iraq and Serbia. The gold dinar dates back to the early days of Islam, with the name deriving from the Roman currency called “denarius” meaning “ten times” (as it was originally a coin worth ten asses).

“Blame It on Rio” is an oft-panned romcom released in 1984 starring Michael Caine, Valerie Harper and a young Demi Moore. What’s remarkable to me is that “Blame It on Rio” was directed by the great Stanley Donen, who also directed classics such as “Singin’ in the Rain”, “On the Town”, “Seven Brides for Seven Brothers” and “Charade”.

The song “Red Red Wine” was written and originally recorded by Neil Diamond, in 1967. The lyrics refer to someone drowning his sorrows in red wine. The most famous cover version of the song was recorded by UB40 in 1982. It’s an interesting exercise to compare the mood of the two very different recordings, both of which I think have their merits …

The brand name Sno-Cat is owned by the Tucker company. All snowcats are tracked vehicles built to work in snow, and are famously used in expeditions to the polar regions. The modern Sno-Cat from Tucker differs from its competitors in that it has four independently-mounted tracks.

Mortarboards, or square academic caps, are associated with school graduations all over the world, although traditions do differ. For example in Ireland (where I come from), mortarboards are only worn by female graduates.

A canid is a carnivorous mammal of the family Canidae, which includes foxes, wolves, dogs, jackals and coyotes.

17. Source of valuable metal : GOLD MINE

58. Extinct since way back when … and, in a way, what each set of circles represents : LONG GONE