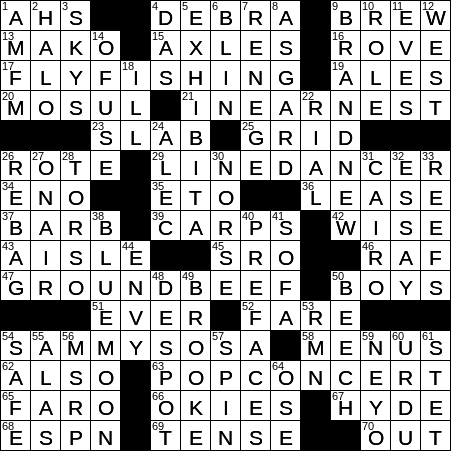 Themed answers start with a word that often precedes OUT, giving a term used in baseball:

When Debra Winger was a young woman she was involved in a terrible car accident that resulted in a cerebral hemorrhage. She was left partially paralyzed and blind, and was told that she would never see again. Given so much time to think after the accident, she decided that if she did indeed recover she would leave her home in Ohio and move to California to take up acting. After ten months of blindness Winger recovered, and off she headed.

The shortfin mako shark can appear on restaurant menus, and as a result the species is dying out in some parts of the world. The mako gets its own back sometimes though, as attacks on humans are not unknown. It is the fastest-swimming shark that we know, and has been clocked at speeds of over 40 miles/hour. And the shark in Ernest Hemingway’s “The Old Man and the Sea”, that’s a mako. “Mako” is the Maori word for “shark” or “shark tooth”.

The Electric Slide is a line dance that purportedly dates back to 1976. It’s a dance often associated with the 1983 song “Electric Boogie” performed by Marcia Griffiths.

When the Beach Boys formed in 1961, they were very much a family concern. Brian, Dennis and Carl Wilson were three brothers, Mike Love was their cousin, and the fifth member of the band was family friend Al Jardine. Back then, the manager of the group was Murry Wilson, the father of the three Wilson brothers.

The Backstreet Boys (BSB) are a male vocal group that formed in 1993 in Orlando, Florida. In fact, the group’s first performance was in SeaWorld Orlando in May of that year. They’ve come a long way since SeaWorld, and have sold more records than any other boy band in history.

Both Sammy Sosa and Mark McGwire were named Sportsperson of the Year in 1998 by “Sports Illustrated” magazine.

The Beatles concert tour of 1965 was the band’s second, after the phenomenal success of their debut appearances in America the prior year. The opening engagement was at Shea Stadium, a concert at which the Beatles only played for 30 minutes. The audience of over 55,000 people set a new record for concert attendance, as did the gate of $304,000 (seems small now, huh?). The amplifiers in the stadium were completely overpowered by the noise of the crowd, and the Fab Four literally couldn’t hear themselves sing. At one point, John Lennon just started goofing around as no one could hear the music, and starting playing keyboards with his elbows!

Faro is a card game somewhat akin to Baccarat that was popular in England and France in the 18th century. Faro made it to the Old West, where it became a favorite of Doc Holliday and Wyatt Earp. The origin of the name “Faro” is unclear. One popular theory is that Faro is a contraction of ‘pharaoh’ given that Egyptian motifs used to be common on playing cards of the period. There’s another theory involving the usual suspects: Irish immigrants and famines …

A blintz (also “blin”, plural “blini”) is a thin pancake similar to a crêpe although unlike a crêpe, a blintz may contain yeast.

The state of West Virginia (WVA) was formed during the civil war when the western counties in the old state of Virginia (VA) voted to secede from the Confederate state.

“Rial” is the name of the currency of Yemen (as well as Iran, Oman, Cambodia and Tunisia). Generally, there are 1,000 baisa in a rial.

A despot is a ruler with absolute power, often one who wields that power oppressively. “Despot” is an old French term from the 14th century, ultimately derived from the Greek “despotes” meaning “master of a household, absolute ruler”.

Actress Brooke Shields started working as a child model when she was just 11 months old, appearing in an ad for Ivory soap in 1966. At 14, Shields became the youngest fashion model to ever appear on the cover of “Vogue” magazine. She was 12 years old when she had her first acting role, a leading part in 1978’s “Pretty Baby”. Her big break in films came with the 1980 film “The Blue Lagoon”, when she played alongside Christopher Atkins, portraying two teenagers marooned on a tropical island. Shields was married to tennis star Andre Agassi from 1997 to 1991.

50. Tree that sounds like a summer vacation spot : BEECH

The small triangular nuts of the beech tree are edible, but are very bitter. The nuts are called “beechmast” or simply “beechnuts”.