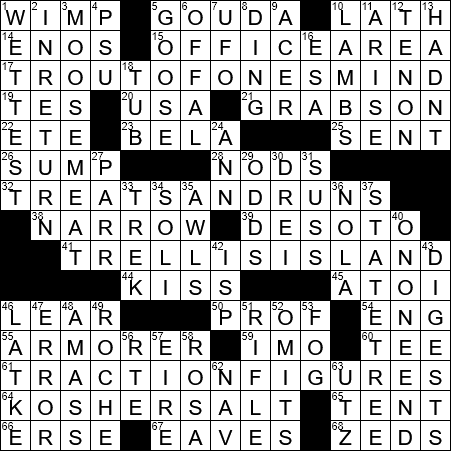 Today’s Theme (according to Bill): “Tradditions”

Themed answers are common phrases with TR- added at the start:

In American football, a quarterback (QB) might throw to a tight end (TE).

Bela Bartók was a composer and a pianist, and after Liszt, he is perhaps considered by many to be Hungary’s greatest composer.

32. Participates in a biathlon for physicians? : TREATS AND RUNS (from “eats and runs”)

“That way madness lies” is a phrase meaning “taking such an action could drive one crazy”. It is a direct quote from Shakespeare’s “King Lear”. The title character speaks the line while expressing grief for the selfish and cruel behavior of his daughters:

Chainmail is a type of armor consisting of a mesh made from small metal rings linked together.

What is labeled “kosher salt” usually isn’t “kosher-certified salt”, i.e. it hasn’t necessarily been manufactured in accordance with religious guidelines. Kosher salt is coarser than table salt, and does not include common additives such as iodine. The adjective “kosher” is a reference to the use of such salt in the Jewish religious practice known as kashering, the soaking and salting of meat in order to draw out all of the remaining blood.

The moose is the largest species in the deer family, and can stand almost at 7 feet at the shoulder. Moose are a little unusual in that they are solitary animals, unlike other deers who tend to move in herds. We use the term “moose” here in North America, but confusingly, the same animal is referred to as “elk” in British English.

6. Remains at the butcher : OFFAL

The internal organs and entrails of a butchered animal is referred to as “offal”. Examples of dishes that make use of offal would be sausages, foie gras, sweetbreads and haggis. The term is a melding of the words “off” and “fall”, and dates back to the 14th century. The idea is that offal is what “falls off” a butcher’s block.

Ding! The microwave has finished reheating your dinner.

Henry VIII was the English King with the most wives. Well, something rubbed off on his last wife, Catherine Parr. She was to become the English Queen with the most husbands! By the time she married Henry she had been widowed twice, and after Henry died she married once again, racking up four husbands in all.

Famously, King Henry VIII had six queens consort. There is a rhyme that is commonly used to help remember the fates of each of his wives, which goes:

King Henry the Eighth, to six wives he was wedded. One died, one survived, two divorced, two beheaded.

The use of the term “divorce” isn’t quite accurate though, as in fact Henry had two of his marriages annulled. His wives (and their fates) were:

40. How brooms are usually stored : ON ONE END

51. Feature of many a Daniel Boone depiction : RIFLE

A banshee is a female spirit in Irish mythology, from the Irish “bean sí” meaning “woman of the fairy mounds”. The banshee is supposedly heard wailing in the night, especially when someone is about to die.

Utz is the largest privately-held producer of snack foods in the US. The company was founded in 1921 and is based in Hanover, Pennsylvania.