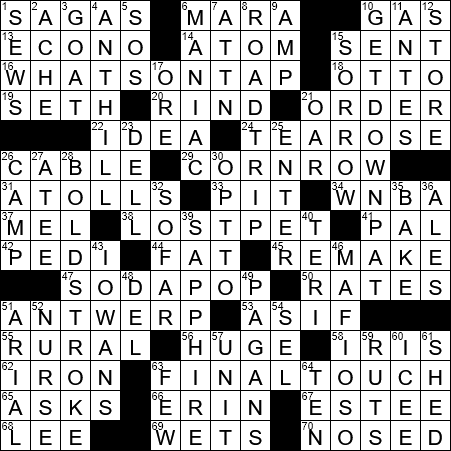 Themed answers each end with a different synonym of the word “TOUCH”:

The Vikings were a Germanic people from northern Europe who were noted as great seafarers. Key to the success of the Vikings was the design of their famous “longships”. Made from wood, the longship was long and narrow with a shallow hull, It was also light, so that the crew would actually carry it small distances over land and around obstacles. Longships were designed to be propelled both by sail and by oars.

Econo Lodge is a low-cost hotel chain in the Choice Hotels portfolio of brands. The chain started in 1969 as Econo-Travel, and demonstrated pretty quickly that budget-hotels were a good idea. The first hotel was built in Norfolk, Virginia and it started making money three weeks after welcoming its first guests.

“Steve Jobs” is a 2015 biographical film about the life of the Apple co-founder. The film is based on an excellent biography of the same name by Walter Isaacson. Michael Fassbender plays Jobs, and Seth Rogen plays Apple co-founder Steve Wozniak. Aaron Sorkin wrote the screenplay, which is always a good thing as far as I’m concerned. I’m going to have to put this film on my “watch” list …

The kumquat tree bears fruit that looks like a small orange, about the size of an olive. The rind of a kumquat is sweet, and the center sour, so often it is only the rind that is eaten. The name “kumquat” comes from the Cantonese “kamkwat” meaning “golden orange”.

The traditional braids known as “cornrows” can also be called “crows”, which is a shortened version of the original term. The style was imported into the US from Africa.

An atoll is a coral island that is shaped in a ring and enclosing a lagoon. There is still some debate as to how an atoll forms, but a theory proposed by Charles Darwin while on his famous voyage aboard HMS Beagle still holds sway. Basically an atoll was once a volcanic island that had subsided and fallen into the sea. The coastline of the island is home to coral growth which persists even as the island continues to subside internal to the circling coral reef.

“High Anxiety” is a Mel Brooks film released in 1977 that parodies suspense films, particularly Alfred Hitchcock’s “Spellbound”, “Vertigo” and “The Birds”. In fact, Hitchcock actually helped Brooks with the movie’s screenplay. He also sent Brooks a case of wine after viewing the film with a note that read “A small token of my pleasure, have no anxiety about this.”

The port city of Antwerp is the second most populous urban area in Belgium after the capital Brussels. To most of the French-speaking population of the country, Antwerp is known as Anvers. The city’s economy is driven by the volume of traffic through the port, as well as trade in diamonds.

A leprechaun is a mischievous fairy in Irish folklore. Traditionally, leprechauns spend their days making shoes and hide all their money in a pot of gold at the end of a rainbow. Our word “leprechaun” comes from the Irish name for such a sprite, i.e. “leipreachán”.

Years ago I was taking a tour of a beautiful Elizabethan manor house in England, and was told a little “threshing” story by the guide as we stood in one of the rooms. She reminded us that threshing was the removal of seeds from chaff, and told us that back in the day the “chaff” was sometimes called the “thresh”. Thresh would be used on the floors, particularly in the kitchen areas where it would soak up spills and provide some thermal insulation, much as sawdust was used in my favorite pubs many moons ago. She pointed to two slots at the bottom of the door jambs where she said a low board was placed upright on the floor, to hold the thresh in the room. The board was called a “thresh-hold”, giving us our contemporary word “threshold”. I am not sure if all of that is really true, but it makes a nice story …

A Mafioso is a member of the Mafia, with the plural being “Mafiosi” ( sometimes “Mafiosos”).

Marina del Rey is a coastal community in California located within the borders of the City of Los Angeles. Marina del Rey is home to the world’s largest harbor for small craft, with a capacity for 5,300 boats.

A pagan is someone who holds religious beliefs that are different from the main religions of the world, and especially someone who believes in polytheism. In classical Latin, “paganus” means “villager, rustic”.