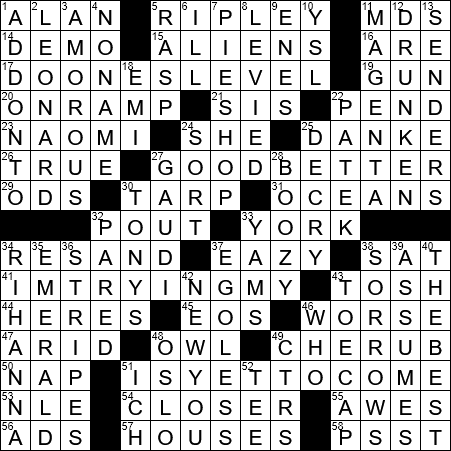 Today’s Reveal Answer: The Best Is Yet to Come

In our themed clues, THE BEST IS YET TO COME, the word “BEST” is missing from the end of the answer:

Alan Turing was an English mathematician. He was well-respected for his code-breaking work during WWII at Bletchley Park in England. However, despite his contributions to cracking the German Enigma code and other crucial work, Turing was prosecuted for homosexuality in 1952. He agreed to chemical castration, treatment with female hormones, and then two years later he committed suicide by taking cyanide. Turing’s life story is told in the 2014 film “The Imitation Game” with Benedict Cumberbatch playing the lead. I thoroughly enjoyed that film …

Ellen Ripley is the protagonist in the “Alien” movie franchise, and is played by actress Sigourney Weaver. Weaver’s casting as Ripley for 1979’s “Alien” marked her first lead role in a film, and indeed her career breakthrough. English actress Veronica Cartwright was initially cast as Ripley, but she was recast as navigator Joan Lambert when Weaver was brought on board.

“Aliens” is a 1986 sequel to the very successful science-fiction movie “Alien” released in 1979. “Aliens” was filmed at Pinewood Studios in England, and at the decommissioned Acton Lane Power Station in London. The film was directed by James Cameron, and starred Sigourney Weaver reprising her role as Ellen Ripley from “Alien”.

“Sis boom bah” is apparently a popular cheer in American high schools and colleges (I didn’t know that!). The term was also used by Johnny Carson when he was playing the character Carnac the Magnificent.

According to the Bible, Naomi was the mother-in-law of Ruth. Naomi’s husband and two sons died, making her very bitter. Because of this, Naomi changed her name to “Mara”, which translates as “bitter”.

“Thank you” translates to “merci” in French, “gracias” in Spanish, and “danke” in German.

“Eazy-E” was the stage name of rapper Eric Lynn Wright. Eazy-E had a pretty liberal lifestyle, fathering seven children with six different women. In 1995, he died due to complications from AIDS when he was only 32 years old.

Daniel Tosh is a stand-up comedian and host of “Tosh.0”, a video clip show on Comedy Central.

Ed McMahon was Johnny Carson’s sidekick on “The Tonight Show” (Here’s Johnny!). McMahon was trained as a fighter pilot in WWII, but did not see action. However he saw a lot of action in the following conflict as he did fly 85 combat missions in Korea.

Composer and conductor Leonard Bernstein was a man who made great strides in bringing classical music to the masses. He gave numerous lectures on the subject on television. Indeed, one of my favorite recordings of the instructive “Peter and the Wolf” by Prokofiev is conducted and narrated by Bernstein.

Enes Kanter is a professional basketball player who was born in Switzerland, although he is a Turkish national raised in Turkey. Kanter moved to the US in 2009 and has played basketball here since attending high school in Simi Valley, California.

Patek Philippe is a manufacturer of luxury watches in Switzerland. The company was founded in Geneva in 1851, by Polish watchmaker Antoni Patek and French watchmaker Adrien Philippe. Patek Philippe watches routinely sell at auction at prices in excess of a million dollars.

Antoni Gaudí was a Catalan architect who is best known for his works in Barcelona. His most famous building the city’s Sagrada Família, which is a large Roman Catholic church. Gaudí took over the project in 1883. Only a quarter of the building was finished in 1926, when Gaudí died in a streetcar accident. Construction continues to this day, with plans for completion by 2026, the centenary of Gaudí’s death.

Although in the US we sometimes refer to sweet potatoes as “yams”, the yam is actually a completely different family of plants. True yams are more common in other parts of the the world than they are in this country, and are especially common in Africa.

“Rude Boy” is a 2010 hit song that was co-written and recorded by Barbadian singer Rihanna. From what I’ve read, the lyrics are quite “rude”, just like the boy in the title.

“Stripes” is a very funny 1981 comedy film about a group of misfits going through basic training for the US Army. The excellent cast is led by Bill Murray and Harold Ramis. There are also a lot of actors making appearances relatively early in their careers, including Sean Young, John Larroquette, Judge Reinhold and Bill Paxton.

“The Best Is Yet to Come” is a 1959 song that was written and initially recorded by Tony Bennett. It was Frank Sinatra who made the song really famous, starting with his recording for a 1964 album. It was also the last song that Sinatra performed in public, doing so in 1995, three years before he passed away.