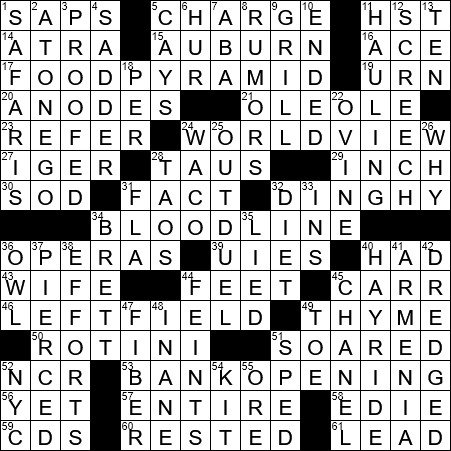 Themed answers each OPEN with a kind of BANK:

Auburn University in Alabama was chartered in 1856 as the East Alabama Male College. The school was renamed when it was granted university status in 1960. Auburn’s sports teams are known as the Tigers, for which supporters use the battle cry “War Eagle!”

The first food guide pyramid was issued in 1974, in Sweden. The food pyramid that we’re most familiar with in this country is the one published by the US Department of Agriculture (USDA) in 1992, which was replaced in 2011. Instead of a pyramid, we now have a guide called MyPlate (available on the website ChooseMyPlate.gov). MyPlate urges us to eat about 30% grains, 30% vegetables, 20% fruits, 20% proteins on our plates, accompanied by a small serving of dairy.

Real Madrid is a professional soccer team based in Madrid, Spain. The team name translates as “Royal Madrid”. Real Madrid is often ranked as the world’s most valuable soccer team, and is one of the most widely supported sports teams on the planet.

One might argue that one’s worldview is the set of lenses through which one views the world, how one understands and answers the “big” questions of life: how did life begin, why am I here, does God exist, who am I? I suppose that in a divided society, different factions might view the same world through a different set of lenses, have different worldviews. That might be something quite relevant today, huh …?

The World Bank Group was formed in 1945 with the mission of making leveraged loans, mainly to poorer countries. The first loan made by the World Bank was its largest to date, a loan to France to help with post-war construction.

Prior to 1915, blood transfusions were carried out directly, from a vein of the donor into a vein of the recipient. All that changed pretty quickly when it was discovered that sodium citrate could be added to blood to stop it coagulating. Soon, it was clear that refrigerated blood treated with an anticoagulant could be stored, and blood “depots” were created in Britain during WWI. The term “blood bank” was first used in 1937, to describe the store of blood kept in the Cook County Hospital in Chicago.

Covent Garden in London’s West End is associated with the Royal Opera House that is located in the area, and with the former fruit and vegetable market that used to sit right at the center of the district. The name “Covent Garden” comes from the fact that there once was a walled garden in the area owned by the Benedictine Monks of the Abbey of St. Peter in Westminster. The abbey rented out the walled garden calling it “Convent Garden”, and this morphed into the area’s current name.

“The Good Wife” is a legal drama showing on CBS starring Julianna Margulies as Alicia Florrick, a litigator who returns to practicing law after spending 13 years as a stay-at-home mom. I binge-watched the show some time back and found it to be well-written, with a great cast and great acting …

One of Caleb Carr’s novels is a latter-day Sherlock Holmes mystery called “The Italian Secretary”. The novel was written as a homage to Sir Arthur Conan Doyle (using the Holmes character with the permission of the Doyle estate). I am a big fan of Sherlock Holmes stories, so I must put this one on my reading list …

In ancient Greece, thyme was burned as incense and used in baths as it was believed to be a source of courage.

NCR is an American company that has been in business since 1884 and was originally called the National Cash Register Company. The company has done well in a market where new technologies seem to be constantly disrupting the status quo. NCR is a leading supplier of automated teller machines (ATMs) and barcode scanners.

A key (also “cay”) is a low offshore island, as in the Florida Keys. Our term in English comes from the Spanish “cayo” meaning “shoal, reef”.

24 City between Austin and Dallas : WACO

25 Best in an épée match : OUTDUEL

Brett Hull is a retired hockey player from Ontario, although he chose to represent the American National Team having obtained dual citizenship. Brett is the son of professional hockey player Bobby Hull and professional figure skater Joanne McKay. Bobby’s nickname is “The Golden Jet”, and Brett’s is “The Golden Brett”. Brett is quite the golfer too, and has stated several times that he prefers golf to hockey.