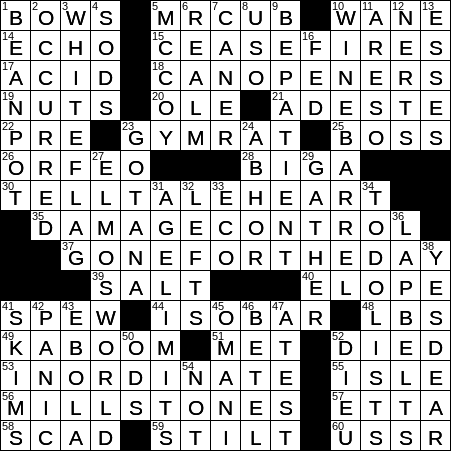 First baseman Ernie Banks was known as “Mr. Cub”, and played his entire 19-year professional career with the Chicago Cubs. The Cubs retired Banks’ uniform number 14 in 1982, making him the first Cubs player to be so honored. Banks was known for his catchphrase, “It’s a beautiful day for a ballgame … Let’s play two!”, a reference to his love of the game, always wanting to play a doubleheader.

“Gym rat” is a slang term describing someone who spends all of his or her leisure time playing sports or working out at the gym. Never been called a gym rat …

That would be a saw boss, the supervisor of a saw crew.

26 Lover of Euridice, in a Gluck opera : ORFEO

“Orfeo ed Euridice” is an opera by Christoph Willibald Gluck that was first performed in 1762. It is perhaps Gluck’s most popular work.

Edgar Allan Poe’s story “The Tell-Tale Heart” is arguably one of his most disturbing works. It is a story of cold-blooded and premeditated murder, with some dismemberment thrown in for good measure.

35 Finger in the dike, so to speak : DAMAGE CONTROL

Back in the late 1500s, something said to be inordinate was not ordered, lacked regularity. Over time, this meaning evolved into “exceeding orderly limits” and so “immoderate, excessive”.

Millstones are pairs of heavy stones used for grinding grains in a gristmill. ONe stone is stationary, and is called the “bedstone”. The “runner stone” turns above the bedstone, and does the actual grinding. The idiom “millstone around one’s neck”, meaning “carrying a heavy load or responsibility”, originated in the gospel of Matthew:

If anyone causes one of these little ones–those who believe in me–to stumble, it would be better for them to have a large millstone hung around their neck and to be drowned in the depths of the sea.

Etta Candy was introduced into Wonder Woman’s universe by DC Comics in 1942. She started out as an undernourished young woman who Wonder Woman encountered in a local hospital. The next time Etta appeared in the comics, she was a rather rotund woman who claims to have been rejuvenated by eating candy. That was 1942 …

“Scad” is the common name for various species in the family of fish known taxonomically as the Carangidae. “Scad” is a Cornish term that dates back to about 1600, when it was used to describe the fish also known as the horse mackerel.

The fish known as a pompano takes its name via Spanish from the Latin “pampinus” meaning “tendril, leaf of a vine”. The name probably comes from the shape of the fish, which somewhat resembles a vine leaf.

The avocet is found in warm climates, usually in saline wetlands where it uses its upcurved bill to sweep from side-to-side in water searching for aquatic insects on which it feeds. Avocets, and other similar species, may go by the common name of “stilts”, a moniker applied to them because of their long legs.

Actor DeForest Kelley is best known for playing Bones McCoy in the original “Star Trek” cast. The show’s creator, Gene Roddenberry, originally offered Kelley the role of Spock, but Kelly refused it and so was given the part of the ship’s medical officer. Bones McCoy had the habit of expressing a need to stick to his medical duties, despite the wishes of his fellow crew members, for example:

“For the Boys” is a 1991 movie starring Bette Midler and James Caan as two performers entertaining the troops during WWII, the Korean War and the Vietnam War. Although the movie is fictional, many believe that Caan’s character is based on Bob Hope, and Midler’s on actress and singer Martha Raye. In fact, Raye pursued an ultimately unsuccessful legal action against the film’s producers on that basis.

There is a pair of letters S (esses) in the word “shoes”.

The last 15 minutes of the children’s show “Sesame Street” was called “Elmo’s World”. The ending segment was directed towards younger viewers, those around 3 years old.

43 Target of a new vaccine : EBOLA

Rial is the name of the currency of Oman (as well as Yemen, Iran, Cambodia and Tunisia). Generally, there are 1,000 baisa in a rial.

A betel nut is something that is chewed, especially in parts of Asia. “Betel nut” is a bit of a misnomer, as the nut in question is actually an areca nut from the Areca palm. For chewing, the areca nut is wrapped in betel leaves and the whole thing is called a “betel nut”.

Notre-Dame de Paris is the spectacular Gothic cathedral that sits on the Île de la Cité, one of the islands in the middle on the River Seine in Paris. Notre Dame is home to many beautiful and significant artifacts, the most famous of which is the Crown of Thorns supposedly worn by Jesus Christ at his execution, placed in the cathedral in 1239. It’s also home to some magnificent gargoyles on the roof, and you can climb up to the roof and take a very close look at them. Well, you used to be able to, until the tragic fire of 2019.