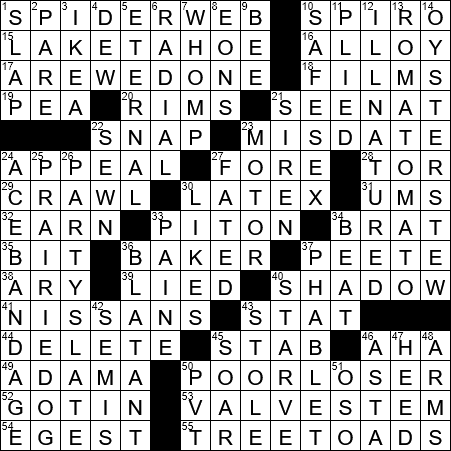 The silk that makes up a web is a protein fiber that is “spun” by a spider. Spider silk is about one sixth of the density of steel, but has a comparable tensile strength.

15. It straddles the border of two western states : LAKE TAHOE

Gravel is a loose mixture of rock fragments. Gravel is classified by the size of those fragments. For example, pea gravel comprises pea-size rounded stones.

Those would be rimless eyeglasses.

Latex is a naturally occurring polymer made by some plants, that can also be made synthetically. About one in ten of the flowering plants in the world make the milky fluid called latex. It serves as a defense against insects and is exuded when a plant is injured or attacked by insects. Latex is collected commercially and is the source of natural rubber, which can be used to make things such as gloves, condoms and balloons.

The Armada is an SUV made by Nissan. The luxury version of the Armada is sold by Nissan as the Infiniti QX80.

On the TV show “Battlestar Galactica”, the commander of the Galactica was Commander Adama. Adama was portrayed by Canadian actor Lorne Greene.

“Battlestar Galactica” is a whole franchise these days based on an original television series that aired in 1978. The executive producer of that first series was Glen A. Larson who had been trying get the show off the ground since the sixties. Larson was finally able to get some finances for his sci-fi show on the back of the success of the 1977 movie “Star Wars”.

3. Many of its products are named for Scandinavian places : IKEA

Radial symmetry is seen in a number of animals and plants. Because of such symmetry, slices through several planes produce two identical pieces. Examples are jellyfish and sea stars from the animal kingdom, and many flowers from the plant kingdom.

The prairie dog is a type of ground squirrel that is found in the grasslands of North America. Prairie dogs are so named because they inhabit prairies and because they have a warning call that is similar to the bark of a dog.

In an election, a slate is a group of candidates running on a common platform.

Something blatant is flagrant, brazenly obvious. The term was coined by Edmund Spenser in his 1596 poem “The Faerie Queene”. Spenser used “blatant” to describe a “thousand-tongued monster”, a metaphor for slander. It has been suggested that Spenser’s term was derived from the Latin verb “blatire” meaning “to babble”.