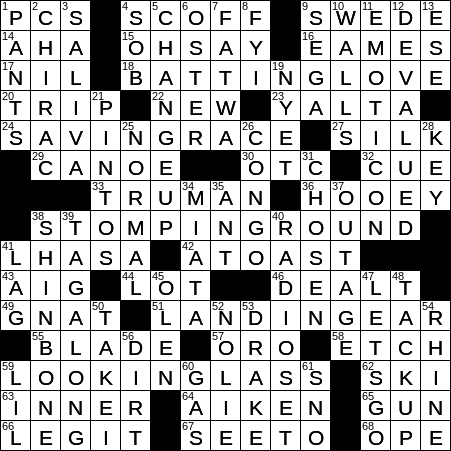 Themed answers comprise two words, and come from common phrases from which a leading letter G has been dropped from the second word:

Staples is an office supply chain store based in Framingham, Massachusetts. Some of the company’s stores have a Staples EasyTech department that provides computer repair and upgrade services.

9. Author Stieg Larsson, for one : SWEDE

Stieg Larsson was a Swedish journalist and writer. Indeed, one of the main characters in his “Millennium” series of novels is a journalist as well. The first two titles in the series are “The Girl with the Dragon Tattoo” and “The Girl Who Played with Fire”. The last of the three titles in the Millennium series is “The Girl Who Kicked the Hornet’s Nest”, which was the most-sold book in the US in 2010. All of the books in the series were published after Larsson’s death. He passed away from a heart attack while climbing several flights of stairs, when he was just 50 years old.

Charles and Ray Eames were a husband-wife team of furniture designers. One of the more famous of their designs is the Eames lounge chair that comes with an ottoman. This trendy piece of furniture featured in a late episode of the television show “Frasier”. In the show, Frasier’s Dad remarks that the Eames chair is so comfortable that he might have gotten rid of his tatty old recliner a long time ago.

Batting (also “batt”) is a layer of fabric used for stuffing furniture and mattresses. The term “batting” comes from the idea of a “beaten” fabric.

Yalta is a resort city on the Black Sea on the Crimean Peninsula. The Crimea is very much in the news in recent years as ownership of the territory is in dispute between Russia and the Ukraine. Yalta was also in the news at the end of WWII, as it was the site of the 1945 Yalta Conference between the leaders of the three main Allies.

Silkroad is an arts organization that was founded in 1998 by cellist Yo-Yo Ma. A very visible arm of Silkroad is the Silk Road Ensemble, which is a collective of about 60 artists who cooperate to produce festivals all over the world, as well as music CDs that feature instruments used in the Silk Road region.

Portage is the carrying of a boat or its cargo over land, perhaps to circumvent an obstacle.

The phrase “passing the buck” supposedly comes from poker. The marker that indicates whose turn it is to deal is called the buck, and it is passed from player to player. Over time, the phrase came to mean the passing of responsibility (or usually blame). President Harry S. Truman popularized the derivative phrase “the buck stops here” by placing a sign bearing those words on his desk in the Oval Office. President Truman had received the sign as a gift from a prison warden who was also an enthusiastic poker player.

Jokhang is considered by most Tibetans to be the most sacred temple in the whole of Tibet. Located in Lhasa, it was founded in the 7th century. The name “Jokhang” is translated today as “House of Buddha”.

The tradition of “toasting” someone probably dates back to the reign of Charles II, when the practice was to drink a glass of wine to the health of a beautiful or favored woman. In those days, spiced toast was added to beverages to add flavor, so the use of the word “toast” was an indicator that the lady’s beauty would enhance the wine. Very charming, I must say …

Conrad Aiken was a novelist and poet. Aiken won the Pulitzer Prize for Poetry in 1930 for his “Selected Poems”, and was named Poet Laureate of the United States in 1950.

Jacques Chirac served as President of France from 1995 to 2007. He also served twice as Prime Minister of France, and as the Mayor of Paris.

A changeup is a baseball pitch that is thrown so that it looks like a fastball, but actually arrives at the plate more slowly.

In the Muslim tradition, a fatwā is a religious opinion issued by an Islamic scholar (a “mufti”) on a matter of Islamic law. There is a common misconception that a fatwā is a death sentence imposed on a person, and although such a drastic directive is a possible component of the opinion, it is a very rare occurrence.

The English word “no” translates into Russian as “nyet” and into German as “nein”.

Siberia is a vast area in Northern Asia. The region’s industrial development started with the construction of the Trans-Siberian Railway from 1891 to 1916, which linked Siberia to Russia in the west.

A pinto is a horse with patchy markings of white mixed with another color. “Pinto” means “painted” in American Spanish.

“Congo” is a 1980 novel by Michael Crichton. It’s all about searching for diamonds in the dense rainforest of Congo. The novel was turned into a movie in 1995. I hear that the book is a lot better than the film …

Longboat Key is a barrier island and town along the central west coast of Florida. Longboat is considered to be part of the Sarasota metropolitan area.

An insect is a six-legged arthropod, i.e. a hexapod.

Robert Olen Butler is an American writer of fiction. He won a Pulitzer in 1995 for his collection of short stories called “A Good Scent from a Strange Mountain”. Each of the stories in the book tells of a different Vietnamese immigrant living in Louisiana.

50. Castmate of Doohan and Nimoy : TAKEI

In the “Star Trek” series on television and in the movies, the colorful character named Scotty was played by the Canadian actor James Doohan. Doohan joined the Royal Canadian Artillery at the start of WWII, and participated in the D-Day Invasion of Normandy. After surviving the landing, that same day Doohan was shot by one of his own men in a tragic mishap. Doohan was hit six times, with a bullet to his chest stopped by a silver cigarette case he was carrying. One of Doohan’s fingers was shot off in the incident. He managed to conceal that injury during his acting career.

The Schönburg is a castle located in the Upper MIddle Rhine Valley above the medieval town of Oberwesel. The castle is named for the Schönburg noble family, as the Dukes of Schönburg ruled over Oberwesel from the 12th century.