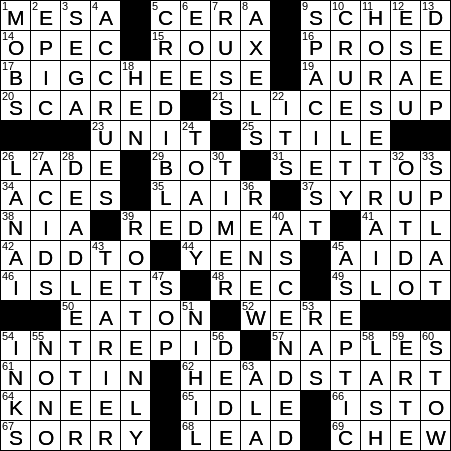 “Superbad” is a comedy movie released in 2007. The script for the film was written by Seth Rogen and Evan Goldberg. Rogen and Goldberg started work on the script when they were just thirteen years old, with the first draft being completed by the time they were fifteen.

A bot is computer program that is designed to imitate human behavior. It might crawl around the Web doing searches for example, or it might participate in discussions in chat rooms by giving pre-programmed responses. It might also act as a competitor in a computer game.

Egg cream is a beverage, and one that I only know of from crosswords. It is remarkable, I think, in that it contains neither egg nor cream! The drink supposedly dates back to the late 1800s and was invented in Brooklyn. It is a fountain drink, made up from chocolate syrup, milk and seltzer (soda).

The Azores is an archipelago of nine volcanic islands in the North Atlantic lying about 1,000 miles west of Portugal. The Azores are an autonomous region belonging to Portugal.

“O patria mia” is an aria from Verdi’s “Aida”. The aria is sung by the title character, with “O patria mia” translating as “O, my homeland”.

In the world of retail, “Black Friday” is the day after Thanksgiving in the US. Black Friday is when many stores start the holiday shopping season, and so offer deep discounts to get ahead of the competition.

Russ Feingold is a former US Senator for the state of Wisconsin. A Democrat, Feingold is perhaps best known for his work with Republican Senator John McCain that resulted in the Bipartisan Campaign Reform Act of 2002, usually called the McCain-Feingold Act.

“Horse Head” is the name given to a number of geographic locations. For example, there’s an unincorporated community called Horse Head in Virginia, and a Horse Head Island in Greenland.

A deadhead is a dull or unproductive person.

Dead letter mail is undeliverable, mail that cannot be delivered to the addressee nor returned to the sender. Here in the US, once a letter has been deemed undeliverable, postal workers are permitted to violate the principle of secrecy of correspondence in an attempt to track down the letter’s origin or destination.

“Nihil” is the Latin word for “nothing”, and is a term that we’ve absorbed into English. “Nihil” is also the root from which we get our term “nil”.