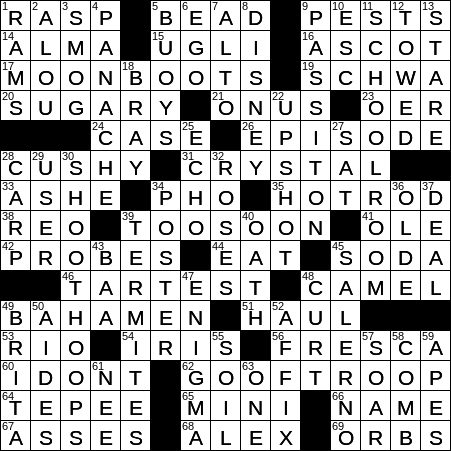 Themed answers each include two instances of the letter pairing OO:

Italian designer Giancarlo Zanatta was inspired to create what became known as Moon Boots in 1969 after watching the moon landing, along with the rest of the world. Said boots became somewhat trendy in the 1980s. They’re still produced today, in Ukraine.

Tony the Tiger has been the mascot of Frosted Flakes cereal since the product’s introduction in 1951. As Tony would say, “They’re Gr-r-reat!” Well, I thought they were when I was a lot younger …

Our term “cushy”, meaning “easy and profitable”, is actually Anglo-Indian slang coming from the Hindi word “khush”, which translates as “pleasant, happy”.

Arthur Ashe was a professional tennis player from Richmond, Virginia. In his youth, Ashe found himself having to travel great distances to play against Caucasian opponents due to the segregation that still existed in his home state. He was rewarded for his dedication by being selected for the 1963 US Davis Cup team, the first African American player to be so honored. Ashe continued to run into trouble because of his ethnicity though, and in 1968 was denied entry into South Africa to play in the South African Open. In 1979 Ashe suffered a heart attack and had bypass surgery, with follow-up surgery four years later during which he contracted HIV from blood transfusions. Ashe passed away in 1993 due to complications from AIDS. Shortly afterwards, Ashe was posthumously awarded the Presidential Medal of Freedom by President Bill Clinton.

Perhaps the most distinctive feature of a camel is the large deposit of fatty tissue on its back. The dromedary is the most common camel, and has two humps of fatty tissue on its back. The Bactrian camel has two humps, and makes up just 6% of the world’s camel population. Those fatty humps are useful if no food or water is available, as fat can be broken down into water and energy.

Fresca is a Coca Cola product introduced in 1966 that is a little unusual in that it has no Pepsi Cola equivalent. It has always been marketed as a zero-calorie grapefruit drink, and so is artificially sweetened.

“Goof Troop” is a Disney cartoon show that aired in the early nineties. Featuring Goofy the dog, and Goofy’s son Max, the series spawned the animated movies “A Goofy Movie” (1995) and “An Extremely Goofy Movie” (2000).

Moisés Alou played Major League Baseball, as did his father Felipe and his uncles Matty and Jesús.

A glee club is a choir group, usually of males, that sings short songs known as “glees”. A glee is a song scored for three or more voices that is performed unaccompanied.

A bray is the sound made by a donkey. Hee-haw!

Fisherman’s soup is a spicy fish soup from Hungary that is flavored with a generous helping of paprika. Also called “halászlé” in Hungarian, the soup uses a mix of river fish, but often just carp.

Brita is a German company that specializes in water filtration products. Brita products do a great job of filtering tap water, but they don’t “purify” it, they don’t remove microbes. That job is usually done by a municipality before the water gets to the faucet.

The whole “Planet of the Apes” franchise was based on a French novel by Pierre Boulle called “La Planète des singes”. The book was published in English as “Monkey Planet”, but was re-released as “Planet of the Apes” when Hollywood had made its choice for a movie title.